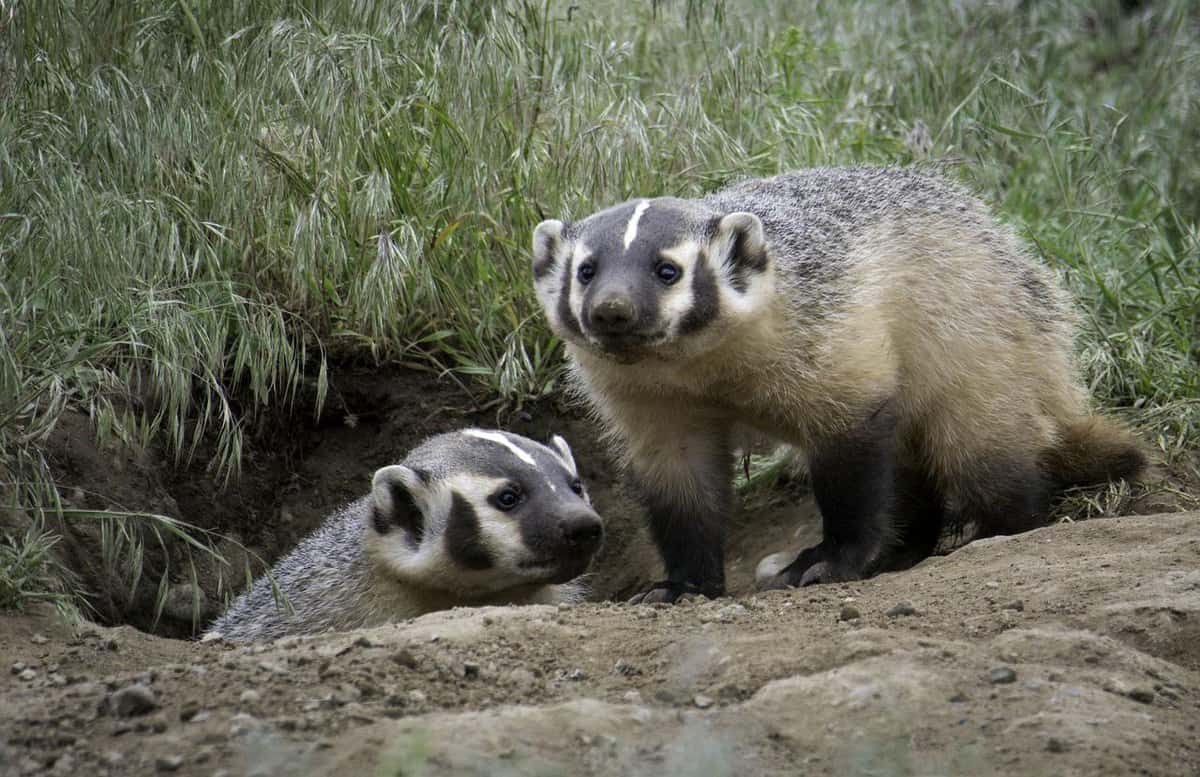 The American Badger has the scientific name Taxidea taxus, with species code “TATA.” It is a member of the Mustelidae family, together with weasels, otters, ferrets, minks, and wolverines.

What kind of habitats provide the American badger with all of their needs and make them feel comfortable? – and which habitats would they instead say, “ta-ta!” (or “goodbye!”) to? Floofmania gets into it!

What Kind Of Habitat Do Badgers Prefer?

With their flat bodies and short, stocky legs, flat terrains are generally much more manageable for badgers to navigate than dense forests, or areas with rocky soils, for example. Badgers, therefore, prefer to live in dry, open grasslands, fields, and pastures. In terms of altitude, they can be found from sea level up to high alpine meadows.

Because of this preference, wild badgers are most often abundantly found in appropriate habitats in North America’s Great Plains region and the Rocky Mountains.

They are found in the north to central Western provinces of Canada, throughout the western United States, and south throughout the mountainous areas of Mexico.

What Kind Of Food Sources Do Badgers Need?

Aside from being more comfortable for them to move around in, their chosen habitat is also full of their preferred food.

Badgers hunt small mammals, including pocket gophers, prairie dogs, and deer mice. Badgers also eat insects and earthworms. They will not hesitate to eat snakes, lizards, and ground-nesting birds if they can get their claws on them.

They use their long, powerful claws to dig up these rodents’ dens or plug them in to force their prey out from the other end.

Here’s a video of a badger trying to dig a gopher out of its burrow with a curious onlooker:

Can Badgers Adapt To Different Environments?

Nature has always been about the survival of the fittest, and the American badger is one species so determined to survive it can adapt and thrive in many different environments.

Generally speaking, as long as they can easily move around, they can build a burrow, and they have a constant food supply, badgers can live in that environment. Aside from meadows and grasslands, people have found badgers in semi-deserts, open forests with lots of grassy ground cover, and near urban areas.

Badgers can adjust to whatever place they find themselves in, slightly altering and adapting their lifestyle and food choices to the available local resources.

Can you find American badgers near you? Here is a list of US states where you can see this species!

Do Badgers Need To Live Near Water?

All animals need water to survive. Badgers, however, don’t need as much water as others because they can draw moisture from their food.

Still, being near a water source will always be a benefit – if not directly for the badger, then at least for its prey.

Why Do Badgers Need A Burrow (A Sett)?

A badger’s den is called a sett.

Unlike European badgers that tend to live in one sett their entire lives, American badgers are always on the move, constantly changing burrows every few days. The only exception to this behavior is when a badger has just given birth and is caring for her babies.

Because of this trend, European badgers’ dens tend to be extensive underground tunnels while American badgers’ are usually much simpler. American badgers typically use existing burrows made by other species, such as prairie dogs and ground squirrels, and simply enlarge them for their comfort.

Since they are constantly moving, American badgers tend to have multiple dens and burrows, which they use for sleeping, hunting, storing food supplies, and, as mentioned, giving birth.

Badger dens only have one entrance, and the pile of dirt next to it is always a giveaway. Badgers tend to run into a burrow and plug up the entrance to keep themselves safe when something threatens them.

There is one more difference between European and American badgers regarding setts: While European badgers tend to live in groups, American badgers are stoutly solitary animals that only seek out others of their kind when it is time to mate.

Here is a video of an American badger digging a burrow:

What Impact Do Badgers Have On The Environment?

Though quiet and hard to spot, badgers do much for the ecosystems they belong to. Though not universally accepted, many scientists think badgers deserve to be called keystone species.

Here are some things badgers do that benefit the environment:

While American badgers are still considered species of “least concern” (the furthest category from “extinction”), scientists have noted that their populations are slowly decreasing primarily due to loss of habitat. Their habitats are slowly yet surely being destroyed by urban development and expansions of agricultural lands.