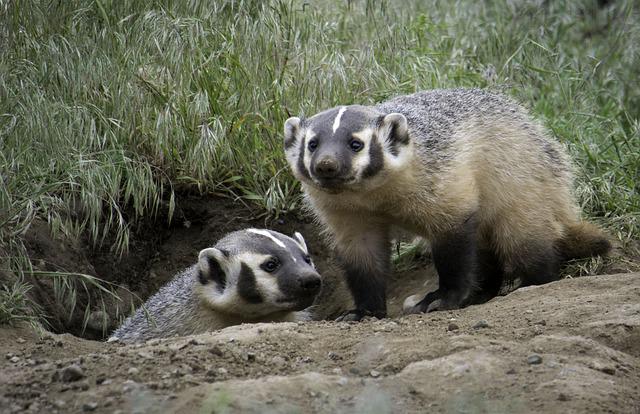 There are a lot of different wild animal noises that fill the air in North America, and it can be hard to tell exactly who is responsible for what sounds.

American badgers make a variety of vocalizations for many reasons, from communicating amongst themselves to warding off potential dangers. From the different sounds you can hear, you may be able to tell the age, gender, and even attitude of a badger in your area.

Read ahead to find out all the different noises you might hear from an American badger and what they mean. You will also discover how to tell if the sounds you are hearing might actually belong to something other than a badger.

Overall, American badgers are pretty noisy animals. Not only do they make a lot of sounds, but they also have a surprising level of variety in the different noises that they make. Some sounds from the American badger are exclusive to adults or cubs, but almost all badgers will make quite a racket!

Badgers are known to growl, bark, yelp, snarl, snort, and much, much more.

Sound is not the American badger’s only method of communication, though, as they also communicate through body language and smell signals.

What Do Badgers Sound Like When They’re Angry or Fighting?

Badgers are often at their loudest when they are angry or fighting with each other. It can be pretty intense to hear, particularly if you don’t know what you are listening to. Fighting badgers can sound quite similar to cats scrapping and they are loud and ferocious enough that some people even mistake them for cougars or coyotes!

Aggressive badgers tend to growl and snarl, and they can get quite high-pitched when they are really getting into it with each other. One of the distinct fighting sounds badgers make is known as the “kecker”. It is a long, chattering noise that raises in intensity and volume as the fighting gets more vicious.

Fighting sounds are often the most troubling to hear in your yard at night, but this behavior is pretty common among badgers. Even members of the same colony will fight with each other over food, mating rights, or simply for dominance. Young badgers will also fight for fun, and they are generally much more shrill than the adults.

Do Badgers Have Special Mating Calls?

American badgers do make very specific sounds when they are trying to attract a mate. The art of courtship is very specialized for all species, as they need their potential partner to understand their exact intentions, and some types of sound are much more attractive than others.

Male badgers use a sound known as a “churr” as their mating call. It is a throaty, guttural noise that is almost like a very insistent purr. When female badgers hear this noise, they know that a potential male mate is nearby, and the depth and strength of the churr can indicate how large and dominant the animal is.

Many of the other sounds that are involved in mating are a little less pleasant. Badgers will yelp, chitter, or bark at each other when they are annoyed or in pain.

Besides those used in mating, there are quite a few different calls that American badgers have for various situations.

Mothers purr to their cubs as an affectionate call when they are grooming, or trying to encourage their cubs to follow them out of the sett or stay close when they are on the move. Cubs wail as a distress call and squeak to indicate that they are anxious, particularly when they are separated from their mother.

Gentles coos and soft chirps are also quite common calls that cubs tend to use to call out to their mothers.

Sounds That Badgers Make And What They Mean

Now that we know a little bit about the different sounds that an American badger might make, let’s look at everything that you might hear that could be a badger, and what it might mean in the badger’s language.

There are a few growling sounds that you might hear from an American badger. Snarls and chattering noises can sound quite similar to a growl, but a true growl is usually pretty quick to identify. The most classic badger growl is the longest noise that these mammals make, and it has quite a lot of vibration to it. It is a sustained, coarse sound that has an air of threat.

A badger growl is one of their lowest-pitched sounds, but they are still quite sharp, as opposed to the really deep growls that you might hear from a large dog.

Badger growls are generally used for warning away potential dangers or intimidating other animals. Sometimes, badgers growl at each other to assert dominance without having to get into a physical altercation.

You have to be quite close to a badger to hear them grunt or snort. Their grunt is a low noise, and it is pretty abrupt and short, generally emitted in single bursts. Young cubs, however, might grunt in sequence.

Although it sounds a little gruff, a badger’s grunt is generally an amicable close contact call that is used as a gentle form of communication, often during grooming. A badger’s snort, however, is more of a quick burst of air out of its nose. Although it can sound similar to a grunt, it is more of an indication of a surprise than a call.

Two of the most common badger sounds are actually pretty odd to listen to. The chitter is a short, high-pitched chattering noise that badgers make when they are afraid, anxious, or in pain. Females are more likely to chitter than males, and it can often be heard during mating.

The kecker, on the other hand, is a similar but longer chattering sound that is usually heard during fights, to indicate threat or submission. There is also a softer version of this noise which is almost like the whinny of a horse, and it is known as the “whicker”.

Purring is almost completely exclusive to female badgers, and it is generally used to communicate directly between a mother and her offspring. It is a soft, gentle sound that is not too dissimilar from a cat’s purr.

Usually, a mother badger purrs to encourage her cubs or reassure them whilst she is grooming them, as it is a very soothing and pleasant noise for young badgers.

A very similar sound to the purr is the “churr” that we mentioned earlier. Males tend to churr, rather than females, and it is a little more intense, with more insistence.

Churring is basically a mating call, that is used to attract females.

If you hear a little chirping or cooing sound, then you are probably listening to a badger cub. They can almost sound like birds when they are chirping – giving off short, soft, medium-pitched noises in a little series. Badger cubs’ coos are very soft and quite similar to the noise that a dove makes.

Chirps and coos are simple close-range contact calls that badger cubs make to each other and their mothers, as a way of staying in communication and indicating their presence.

The wailing, or crying, noise that you might hear from a badger is almost always a cub in distress. The pitch, volume, and level of intensity of the wail indicate how distressed the cub is, as it is calling for the help of its mother.

A badger’s wail is not like the cry of a baby, it is more growly and coarse, though it can get quite high-pitched when they are very upset.

One of the stranger noises that American badgers make is a barking sound. When they bark, a badger can almost sound like a small dog, and they do it for a number of different reasons.

Sometimes, badgers bark during play, or they might make the noise when they are surprised or startled. They also bark when they are annoyed. It is more common among younger badgers, but adults will also bark to warn off potential rivals.

Badgers can make very high-pitched squeaking noises, or short yelps, which are perhaps among their most disruptive vocalizations. Cubs will squeak when they are frustrated, or feeling anxious, often because they are separated from their mother.

You’re Probably Not Hearing A Badger If You’re Hearing These Sounds:

Although the badger is responsible for a myriad of different noises and may explain some of the sounds that you are hearing at night, they won’t always be the culprit. There are some sounds that badgers simply don’t make, so if you’re hearing any of these, then it’s likely to be something else entirely that is producing it.

Although badgers can be relatively high-pitched, they don’t really make any sounds that are as sharp and clear as a whistle. If you’re hearing a whistling noise, then it is more likely to be produced by a bird, rather than a badger.

Badgers can wail and cubs might make a crying sound, but they don’t really scream. A louder screaming sound is much more likely to be a fox or a big cat than a badger.

Despite the number of different sounds that badgers produce, they don’t have loud enough voices to make a noise that you might describe as a “roar”. About the most aggressive sound that they can make is their bark, so a roar is almost certainly not coming from a badger.