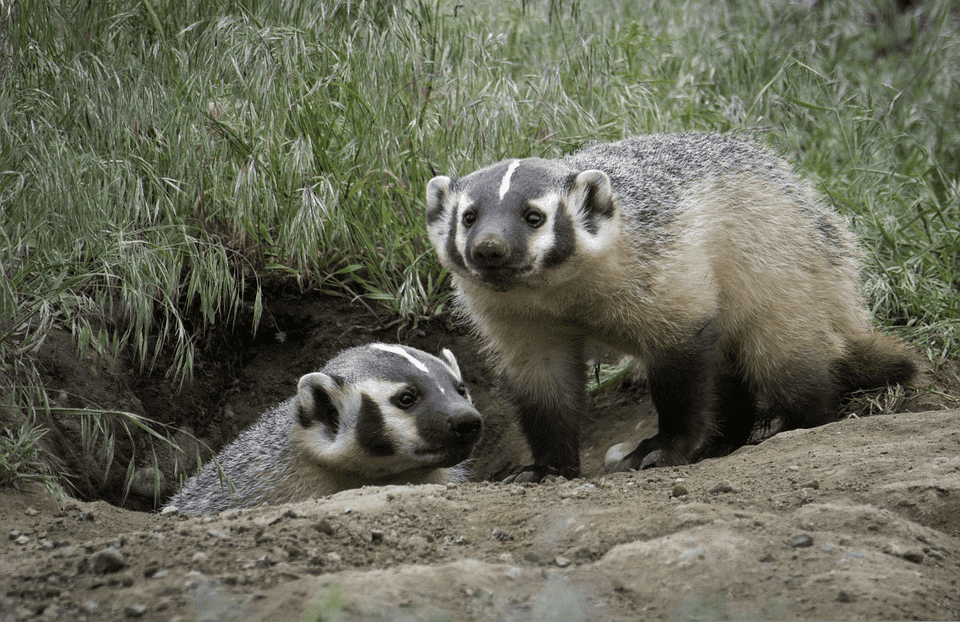 Badgers are such recognized diggers the species is named for their ability: some speculate that the word “badger” comes from the French “becheur,” which means “digger.”

But just why are they so good at digging, and what are they all digging for, anyway? Floofmania digs right in!

Why Are Badgers So Good At Digging?

American badgers are built to dig. They have flat, stocky bodies that are low to the ground and two sets of claws optimally designed for two different purposes: Their thick front claws easily break through dirt, and their back legs kick the broken dirt out of their digging path.

They even have a transparent second eyelid layer that they can keep closed while digging to ensure dirt doesn’t get in their eyes while shoveling away!

Badgers are extremely good at digging holes and also extremely fast at it. They can easily out dig two people with shovels and, if need be, dig a hole large enough for them to disappear into in three minutes or less.

Badgers prefer open areas with sandy, loam soils that are easy to dig through. On the flip side, they tend to avoid heavily forested areas that have soil full of roots that make it difficult to dig and areas with rocky soils.

Just because they prefer sandy soils doesn’t mean they can’t dig through tougher material, though!

What Can Badgers Dig Through And Dig Under?

Amazingly, badgers can dig through roads and thin concrete! There has been one report of a badger seen digging through the asphalt in a parking lot and making it underground in only two minutes.

Badgers can also dig under fences, to the disdain of many homeowners. Desperate residents are encouraged to construct strong, badger-proof mesh fences at least 12-18 inches below the ground (1 – 1.5 feet deep) to ensure badgers cannot get into their yards. Some companies go as far as to encourage fences 3 feet below the ground.

As an aside, badgers don’t only dig – they can climb over your fences, too.

Why Do Badgers Generally Dig?

Digging is an essential part of the American badgers’ hunting strategy. They are known to dig their prey out of their burrows or even stealthily enter these burrows to surprise their unsuspecting prey coming back home.

Sometimes, if the chase gets particularly intense, badgers seal in their prey’s burrows while they are inside, forcing them to come out of their own accord straight into the strong, welcoming jaws of the American badger.

What Kind Of Food Do Badgers Dig For?

American badgers are carnivores whose diet consists of pocket gophers, prairie dogs, ground squirrels, moles, and deer mice. Simply put, they will eat almost any animal smaller than a groundhog.

Badgers are opportunistic and will eat almost anything they can get their paws on, including fruits and vegetables, ground-nesting birds, lizards, insects, bees’ and wasps’ larvae, and even scorpions and snakes!

Do Badgers Bury Their Food?

American badgers do sometimes dig holes to keep food for later consumption. Typically, they don’t bury anything bigger than a jackrabbit.

In one fascinating experiment, however, a conservation biologist observed a badger bury an entire cow carcass. It excavated enough tunnels under it until everything collapsed into a pit. He then entirely covered the cow to hide it from the view of other animals in the vicinity, built a small den beside it, and feasted solo for 11 straight days!

Badgers spend a lot of their time underground. They build multiple dens and burrows within their home range, sometimes connected by underground tunnels extending up to 32 feet (10 meters) long. They use all their shelters simultaneously, freely moving among them every few days. These dens are known as “setts.”

American badgers are solitary and keep to themselves except during breeding season. This is the only time they actively seek out other badgers for mating purposes. During these months, badgers build a nest chamber or network of caves deeper underground that will eventually be used as the birthing chamber and nursery of mother badgers and their young.

Badgers do not live exclusively underground, though – they can be spotted moving above ground at night and sometimes also during the day, except during the winter months when they become less active.

Badgers dig shallow pits called latrines, where they deposit their waste. They typically build these a short distance away from their home dens, where they can easily access them without sleeping next to them.

Can Badgers Dig Up My Garden And Destroy My Property?

Badgers are notorious for digging up gardens, but that’s only because we technically forced them to. The badgers’ shrinking natural habitat due to urbanization is a well-known problem that researchers are speaking up about.

Even if they are not particularly inclined to, badgers are sometimes forced to prowl urban areas instead of their natural habitats to look for food.

Still, the fact remains that you may have badger holes all over your garden now and have to deal with them. But take heart – you are not alone.

Truthfully, it’s not all bad – there are some benefits to having a badger dig up the soil on your lawn.

For gardens, the main benefit is them aerating your soil or loosening it up so that oxygen can seep deeper into the ground nourishing your plants.

Badgers are also known to keep insect and rodent populations at bay and will help you with pest control at no cost (except for holes in your garden).

Unfortunately, badger holes can do more harm than good. They are not only unsightly – they could be dangerous! Someone could step into them and trip, your pets could fall into them, and your lawn equipment could get stuck. It’s best to deal with the situation instead of letting them dig freely.

Types Of Badger Holes In Lawns.

There are four possible types of holes badgers will make in your garden:

It is unlikely for badgers to dig up artificial grass. The species’ sense of smell is so strong they use it to locate their prey through layers of soil. With it, they are more than capable of detecting artificial grass.

Additionally, artificial grass companies expend much effort into making their products as “pest proof” as possible, securing the material extremely tautly and using strong materials that will be difficult to slash through.

They would probably find a way if a badger were truly determined, though.

Tips For Stopping Badgers From Destroying Your Lawn.

Here are some ways to keep badgers away from your property:

1. Make it think predators are in the area. Animals recognize urine as territory marking and will leave your yard alone if they smell anything. These typically have to be reapplied every 5-7 days.

3. Motion-sensor lights. The sudden flood of light will surprise and scare away the badger before it can enter your lawn.

5. Install Scarers. Install a fake predator in your garden, ideally with solar-powered glowing eyes, to deter badgers from approaching!

It is also worth remembering to do what you can to stop inviting badgers into your garden in the first place. Don’t leave food out, whether your pet’s food bowls or scraps in your trash. Also, keep your lawn healthy and grub-free so badgers won’t see it as a snack zone.

What Other Animal Could Be Digging Up My Yard?

Aside from badgers, other potential critters digging up your lawn include skunks, raccoons, rabbits, and squirrels. You can tell which one it is based on the size of the holes, how your soil was damaged, and by observing droppings, if any.

Whatever animal is in your yard, it is likely there simply in the search for food or shelter.