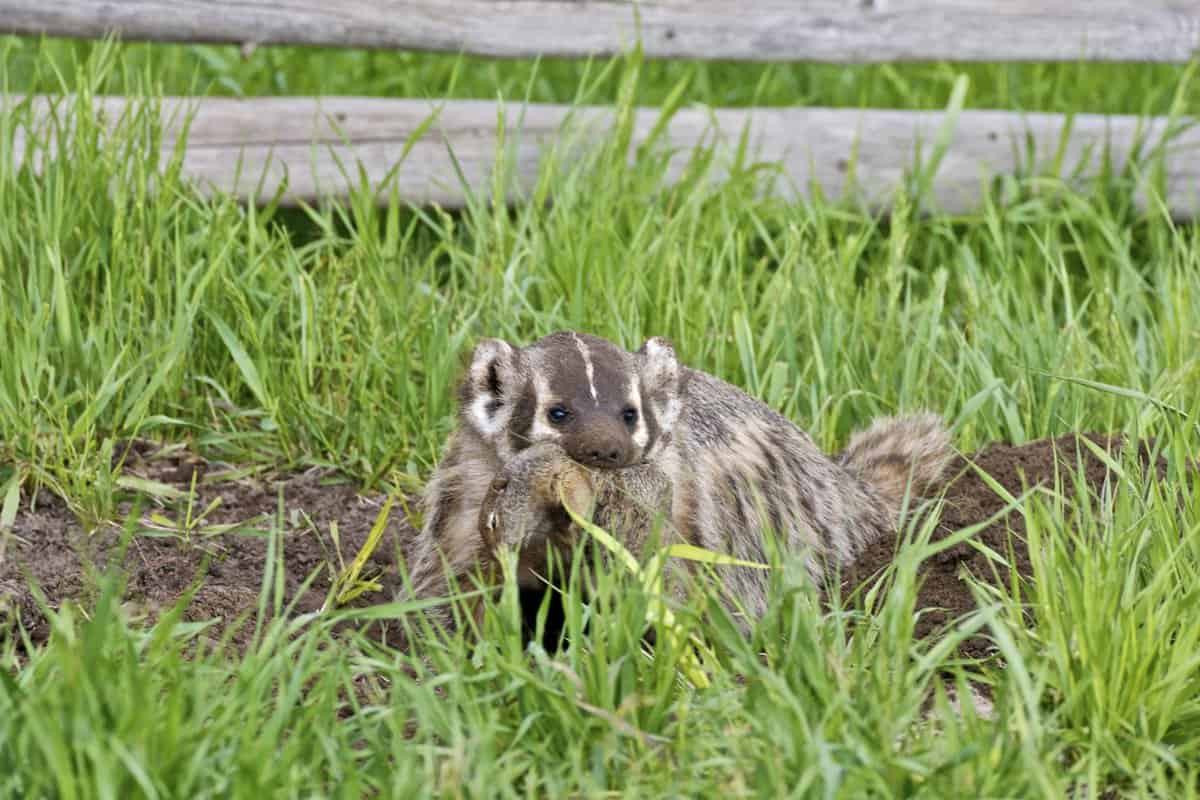 Badgers are short-legged mammals from the Mustelidae family, cousins to otters, weasels, ferrets, martens, minks, and a few more furry friends. They prefer to live in open areas such as meadows, fallow fields, and open forests.

Did you know that there are actually 11 different species of badgers?

In this article, Floofmania zones in on American badgers in particular and gives a rundown on their hunting behavior.

How Do Badgers Hunt?

With their long claws and stout body, you can say that badgers were born to dig – and they most definitely do!

To hunt, they dig up various rodents including rats, mice, and rabbits, and also insects such as earthworms, grubs, and slugs. If they can find it, they eat the eggs of birds and turtles. In a show of intelligence and resourcefulness, badgers have also been seen plugging up rodent holes to force their prey out.

Here’s a fun fact: It is reported that in one night, an adult badger can eat hundreds of worms!

If needed, badgers are willing to give chase to their prey first then burrow after them, cornering their meal and blocking their exit.

Do Badgers Hunt At Night or During The Day?

Badgers are mostly nocturnal animals and do most of the foraging and hunting at night. If they are spotted during the day, it is usually during the early hours of the morning.

Do Badgers Hunt Alone Or In Groups Or Pairs?

American badgers are generally solitary and like to hunt alone, but are willing to make exceptions if it benefits them.

This is not a hard rule for all badger species, however. European badgers for example, actually tend to live in groups – but they still don’t actually work together as a group. Despite sharing a den or “sett,” each individual goes off to hunt for food on his own.

Do Badgers Break The Bones Of Their Prey So It Can’t Run?

We were unable to find conclusive evidence of this behavior, mostly because 80% of the badger’s diet is composed of soft-bodied invertebrates such as earthworms and insects.

It is worth noting again, however, that if a badger wanted to, they probably could! Badgers have incredibly strong, sharp teeth and a powerful jaw, strong enough to grab and crush the flesh and bones of small mammals, some birds, and even reptiles. In fact, the measured strength of their bite (or “bite force quotient”) is even greater than an American black bear!

Is It True That Badgers And Coyotes Sometimes Hunt Together?

Yes! Badgers are typically solitary hunters and like to go about their business alone, but people have observed that they seem to have a unique relationship with coyotes.

It is unsure whether they intentionally work together, or if they just happen to live and hunt around the same area. But usually, the badgers disturb and dig up the prey from their underground burrow, then the faster coyotes take over to chase them down when they are trying to escape.

In return, coyotes intimidate and chase prey back into their burrows, where the badger can dig them up for his feast at his leisure.

Here’s a video of a badger and coyote hunting together:

What Kind Of Animals Do Badgers Hunt?

Badgers are actually omnivores who don’t mind going back and forth between meat, fruit, and veggies. As hunters, however, they will eat almost any animal smaller than a groundhog which includes pocket gophers, prairie dogs, ground squirrels, moles, and deer mice.

They are also willing to hunt and eat ground-nesting birds, lizards, and insects, including scorpions and snakes!

Interestingly, the scorpion and snake poison do not seem to affect badgers whatsoever, leading to the assumption that badgers are simply immune to their venom. This certainly adds to the badgers’ reputation of being tough animals!

(As an aside, this is also why Hufflepuff can and totally should have beat Slytherin in the House cup, are we right? Consider this a shoutout to all Harry Potter fans out there!)

The American badger’s European cousin also has the reputation of being one of the few animals that eat hedgehogs. With their large claws and sharp teeth, they have no problem breaking through the hedgehog’s spiky skin.

Here is a complete list of prey that our floofy friend likes to eat:

If they wanted to, they probably could, but no – fish and amphibians are not a normal part of a badger’s diet.

Badgers do have a tendency to stock food in their dens, but direct observations of this behavior in the wild are extremely limited.

In 2016, scientists from the University of Utah conducted an experiment to see if American badgers would attempt to cache an animal larger than itself. They set up cameras and left two cow carcasses in the desert.

Two badgers shortly came along and independently buried the calves over the span of several days. They even built dens for themselves to sleep next to the buried animals.

Here is a video from National Geographic documenting this: