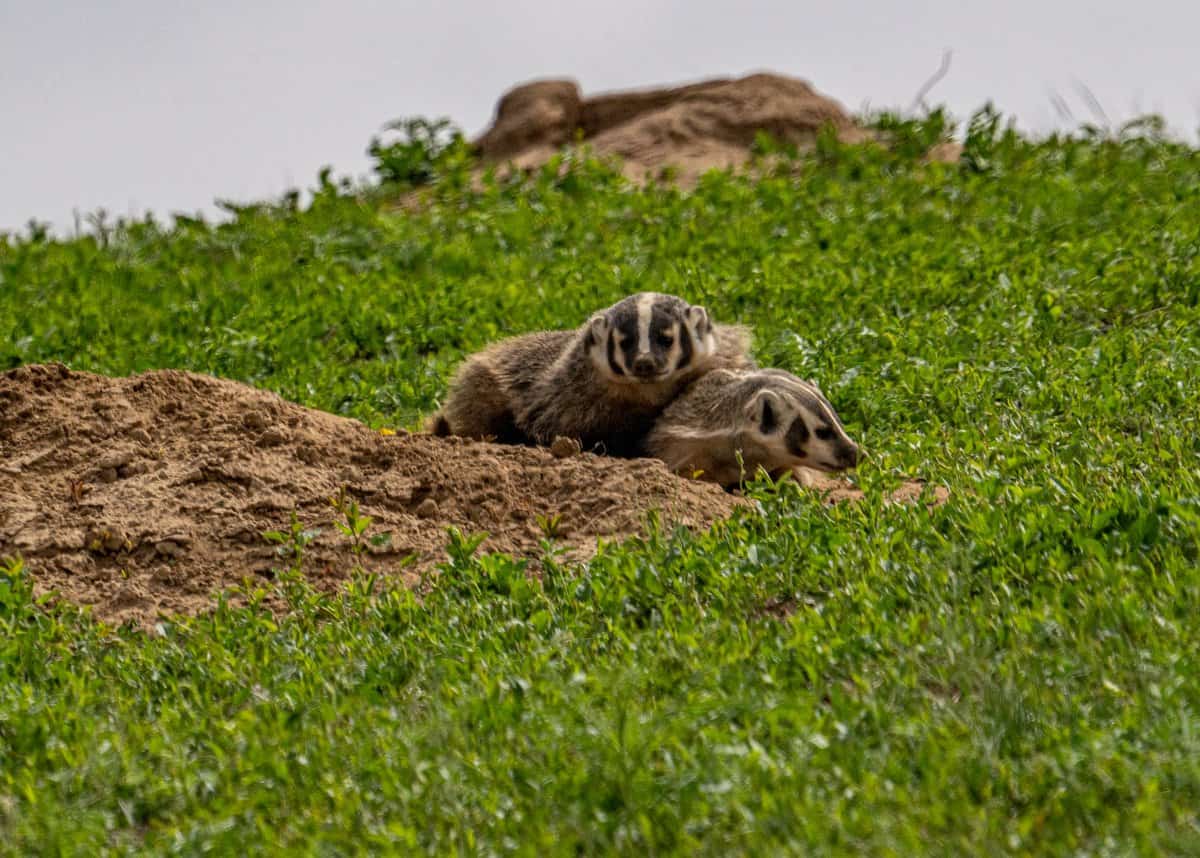 American badgers are one of the easiest animals to recognize because of their prominent black and white markings. They are cute and fluffy, most people find them adorable but what do we actually know about them? Let’s take a closer look and learn more about their mating habits and their offspring.

When Is The American Badger’s Mating Season?

American badger’s mating season is from late summer to early fall because although they do not hibernate they are mostly inactive during the height of winter. They sleep for weeks on end when it is cold.

August and September are the months when badgers break their solitude to pursue a mate and reproduce.

How Do Badgers Find A Mate?

American badgers travel extensively to find mates because they live a solitary lifestyle. While both males and females make an effort in finding a mate, it is usually the male badgers that travel the farthest to find a receptive female. The things they do to procreate!

American badgers have a repertoire of at least 16 distinct calls ranging from long low-pitched growls to high-pitched squeaks and bird-like coos but for their mating calls, the female badger yelps while the male churrs.

The male badger’s churring sound is an insistent, deep, throaty purr with a bubbly quality that is similar to the female purr which is softer and less intense.

American Badgers Use Their Smell When Attracting A Potential Mate

Both male and female badgers use their strong musty odor to signal to a potential mate that they are ready to reproduce. Along with their dating calls, they set out to attract the opposite sex with a strong odor usually produced by the male badger. Their smell is also used to ward off enemies and competing males.

It’s interesting that their smell is used both like a perfume to attract mates and as a kind of repellent to dissuade competition!

American Badgers Fight For Their Mates

During mating season in late summer and early fall, male badgers compete for healthy females to mate and reproduce. When face to face with competition, they do not hesitate to show their autonomy and strength.

Badgers fight by snarling, growling, pushing, shoving, and biting. They fight until one backs away or gets severely injured.

Most of the time, the losing party quickly escapes and moves on to look for another mate. Very convenient, huh?

How Do Badgers Mate?

American badgers mate for 15 to 60 minutes depending on the physical and reproductive condition of the female badger. When conditions are favorable the mating can happen in 1 to 2 minutes.

Badgers are aggressive and noisy when they are mating and they do not bond with their partners after. Mating is an instinct and reproduction is part of their purpose just like all animals, and badgers are not very romantic about it!

Do Badgers Mate For Life?

American badgers are not monogamous and they do not mate for life. They are solitary animals that mate with multiple partners during mating season. American badgers, especially female badgers are promiscuous and do not form a pair bond.

After mating, the pair go their separate ways and potentially mate with other partners. They are the opposite of their Eurasian counterparts, the European badgers, who are social species that live in groups and mate for life.

American badgers are just not into relationships.

American badgers make a lot of noise while mating, they snarl, growl, purr, yelp, and churr. Mating can become so intense, sometimes aggressive that male badgers bite the female, usually at the back of their necks.

Most wild animals have aggressive mating rituals. This is a normal mating practice though, no need to panic. No roses for the female badger!

How Long Are Badgers Pregnant For?

Female badgers are pregnant for 7 months but the actual gestation period is only 6 weeks. This is because the embryos formed after mating are arrested early in development until environmental conditions are appropriate for implantation in the uterus.

Since badgers mate in late summer and early fall, implantation is delayed until December or even as late as February.

Badger cubs are then born around early spring and then the female is ready to mate again.

How Do Badgers Give Birth?

Female badgers give birth alone without the help of the father. They are independent and solitary even during birth. The only time they break their solitude is during mating season and when they are caring for their young.

Do Badgers Have Babies Every Year?

Most female badgers give birth every year. They can mate any time of the year but due to their unusual reproduction process I explained earlier, they can only give birth to one litter per year.

To make the reproductive timeline clearer, let’s map it out:

Female badgers do not have enough time for more than one litter per year. This is one of the reasons why conservationists are keeping an eye on their population.

Badger Cubs And Growing Up

What Are Badger Babies Called?

Baby American badgers are called cubs just like bear babies, although they are not related. Most babies in the Mustelidae family like weasels, wolverines, otters, and ferrets are called cubs.

How Many Badger Cubs Are In A Litter?

Female badgers give birth to 1 to 5 cubs with an average of 3 cubs every year. They are born one at a time with a 33% chance of survival. Only 1 out of every 3 cubs survives and gets to see their first year.

It is rare but not impossible for a female badger to give birth to 6 or more babies. Their small bodies are not built for a big litter.

Female badgers like all mammals produce milk and nurse their young right after giving birth. Badger cubs rely on their mother’s milk for nourishment and nutrition. They do not eat or feed on anything else but milk in the first few weeks.

Before giving birth, the female badger’s mammary glands become active and start producing milk. They are ready to nurse as soon as their cubs are born.

How Long Do Badgers Nurse For?

Badger cubs solely drink their mom’s milk for the first 2 to 3 months of their lives. The mother badger needs to keep fed and hydrated to sustain milk production for at least 3 months to give its cubs a better chance at survival.

A female badger’s milk is full of nutrients and vitamins that serve as a complete food for their young. It is the most nutritious food a cub can get.

Just like other mammals, a mother’s milk is essential for a strong and healthy baby.

When Do Badger Cubs Open Their Eyes?

Baby badgers are born blind and do not get to open their eyes until their fourth or sixth week. They remain helpless and cannot defend themselves, until then, they stay in the nursery or den with their siblings under the protection of their mother.

Like many young mammals at birth, badger cubs do not have a developed vision when born. Their sense of sight develops as they get nourishment and are exposed to their surroundings.

Baby badgers are small, blind, and toothless with thin grey-white fur with stripes on their face visible but not yet prominent. They look cute, vulnerable, meek, and sleepy, which is apt because they spend most of their time sleeping!

Baby badgers look just like a smaller, cuter version of their parents with more subdued colors.

When Do Young Badgers Leave Their Mother?

Badger offspring are ready to leave their mother’s side, disperse, and survive on their own by the time they reach 5 to 6 months.

American badgers are solitary animals so young badgers have to rely on the survival techniques they have learned from their mothers and their survival instinct to make it in the wild.

It is essential that in the first 6 months of a badger’s life that they learn as many skills and experiences from their mothers as possible in order to survive solitary life.

How To Recognize A Young Or Juvenile Badger?

Young or juvenile badger looks slightly different from adult badgers because they are not fully physically developed yet. Young badgers have thin grey-white fur as compared to the dark grey and white, thick fluffy fur of adults.

In short, young badgers are a small, blurry, and slow version of adult badgers.

What To Do If You Found A Badger Cub Alone?

It is rare to come across a badger cub without its mother around because mother badgers are very protective. In case you find a badger cub alone in the wild, remember the following:

How Do You Tell a Male Badger from A Female?

The male American badger also called a boar, has broader and more domed heads than the female. They have fuller, chubbier cheeks and thicker necks while the females have thinner faces and slender necks.

Can American Badgers Mate with Other Species Like Wolverines, Honey Badgers, or Others?

Usually, animals do not mate outside their species. Different species of animals are not attracted to each other and are not genetically inclined to mate with each other.

It is possible that they might mate with other species like Wolverines and honey badgers because physically, there are no reasons why they can’t but it is not likely to happen. If they do, they will not reproduce because they are not genetically compatible.