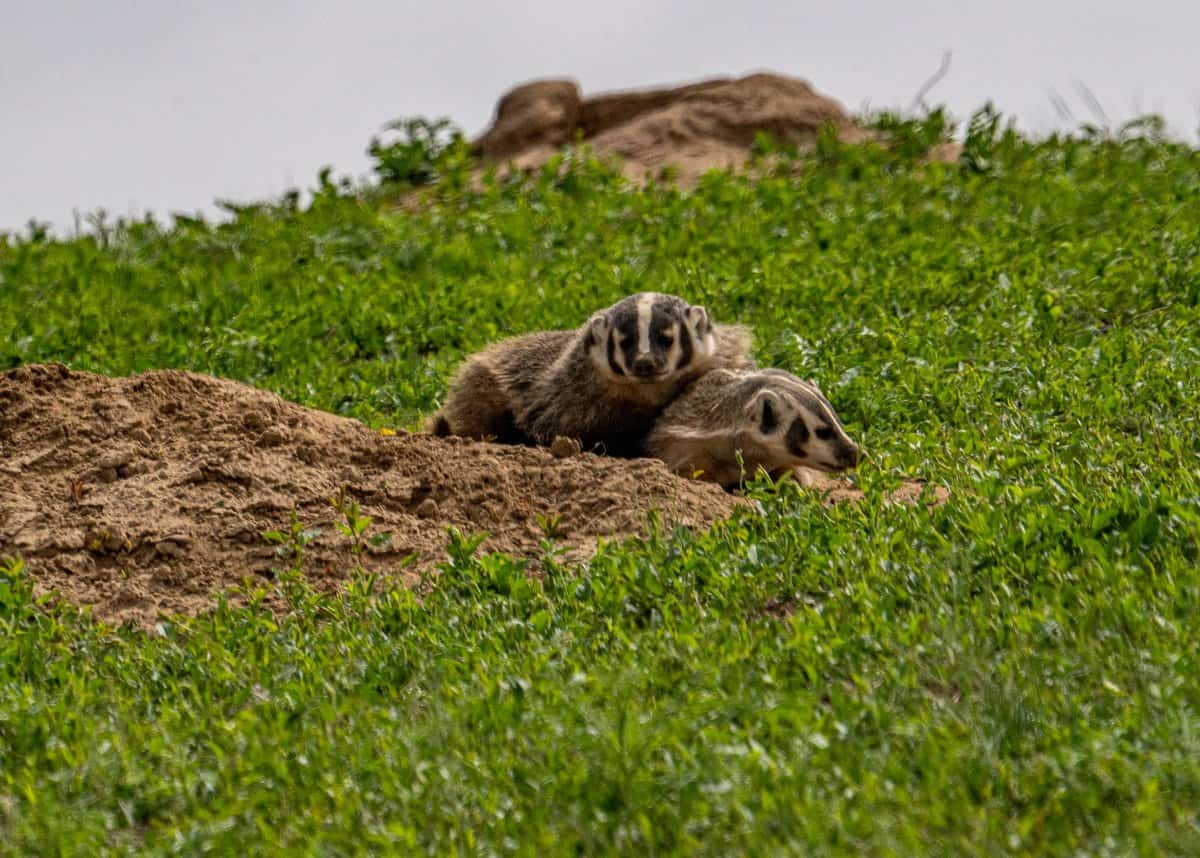 The American badger is a very active creature. It is very energetic whenever it’s awake and can sometimes be observed digging or sniffing around for its next meal.

One can’t help but wonder: Do badgers ever sleep or take a break? Of course, badgers sleep. Every animal on this planet needs to rest and replenish spent energy.

The badger’s sleeping behavior and patterns are unique and interesting. Some of the patterns are similar to those of other animals, but badgers also have some particularities in the way they sleep.

Let’s get started before you go into a snooze.

When Do Badgers Sleep?

Nocturnal animals like the American badger (Taxidea taxus) sleep during the day. After a long night of activity, the badger goes back to one of its setts (or dens) to sleep. This usually happens at the break of dawn. The badger usually sleeps all throughout the day and only emerges at night.

However, don’t be surprised if you see a random badger roaming around during the daytime.

There are three possible reasons why a badger is out of its den during its supposedly sleeping hours:

It cannot be overemphasized how and why sleep is important for the badger. The American badger spends a lot of energy during its waking hours because it’s always on the move. It never stays in one place unless there’s a lot of food nearby. The animal roams around covering 1.6 miles on average every night. If their nearest den is too far back, it will seek or create a new resting place to sleep for the day.

If the badger isn’t within reach of one of its existing setts, they will spend the last few hours of dawn preparing new dens where they can rest before the sun rises. Using their sharp, strong foreclaws and shovel-like hind claws, badgers can dig dens and tunnels at about 9 feet deep in just a few hours.

What Time Of Night Are Badgers The Most Active?

The American badger usually gets out of its den at dusk. As early as 6 pm, depending on how dark it is in the location, this creature of the night can be seen up and about. It will roam the fields, grasslands, prairies, and even urban areas searching for food.

Badgers have heightened senses of smell, hearing, and eyesight. They use these senses in finding their prey at night. Their activities mostly involve digging burrows and raiding dens of burrowing animals like squirrels, prairie dogs, and the occasional burrowing owl.

Badgers prefer digging for food compared to chasing their prey out in the open. They are excellent hunters but they’re also smart enough to know that their mostly diurnal prey are defenseless at night and have less room to fight or escape when inside their dens.

In addition, these dens of small animals are sometimes also home to their prey’s babies, which makes an easy free meal for the persistent badger.

When Do Badgers Go To Sleep? (And When Do They Wake Up?)

American badgers generally sleep during the day and wake up at the start of dusk. Sleeping time is utilized very efficiently by the badger. It likes to rest after a full meal, but it also tends to sleep a lot during periods when food is scarce.

Badgers mostly sleep during the day when their hunting skills and senses do not provide an optimum advantage.

There are instances in which the badger got its meal of the night earlier than usual. Once its tummy is full, the animal will either go to one of its existing setts or proceed to dig up new dens for them to sleep in.

If the badger’s prey is too big to finish off in one go, the smart animal will bury or “cache” the carcass and return to feed on it later.

The wilderness can sometimes be a bit cruel to the badger. There are times of the year when prey and food in general, are scarce. The poor mustelid will just sleep off its hunger for days or weeks, save its energy, and wait till its fortune changes.

Do Badgers Sleep Through Winter? (Hibernate)

American badgers do not hibernate but instead, go into a state of torpor during the cold winter season. Torpor is a lighter form of hibernation. During this state, the badger will lower its heart and breathing rates to a point where it saves energy. This consequently lowers the animal’s metabolic rate further conserving more energy, meaning that it will need much less food to stay alive.

Unlike hibernation, the badger’s state of torpor doesn’t last through the whole winter season. It usually stays in torpor from 29 hours to several days at a time. During one single winter season, a badger can go up to 30 times into torpor.

In between torpor, the American badger goes out of its den and tries to find food to satisfy its hunger. That’s the reason why you can sometimes see badgers roaming around the cold winter nights.

Where Do Badgers Sleep?

American badgers love to live in grass plains that have soft, sandy soil where it’s easy to dig burrows, or “setts”. The badger, as opportunistic as it is, will also raid dens and tunnels owned by other burrowing animals and use them as its own.

It is in one of these setts the badger prefers to rest and sleep. The badger’s sett is well organized in that it has specific sleeping quarters—complete with beddings–for the occupant to rest during the day. There’s also a specific toilet area for peeing and pooping. Numerous exit tunnels are also available in case unwanted predators sneak in. That’s a first-class badger bunker for you!

A single badger can have up to 30 setts in a two-mile radius. Not all of these underground structures have necessarily been built by the badger but have had previous occupants that were either driven away or eaten.

The badger will use a sett and sleep in it for a couple of nights, then will move to another location. These setts are spacious enough to accommodate more than 15 animals at a time.

One interesting fact about the American badger is that it always uses new beddings to sleep on. The leaves and straws that it has used for cushioning from the previous period are changed every time the badger uses the den. That’s a clean habit everyone should have!