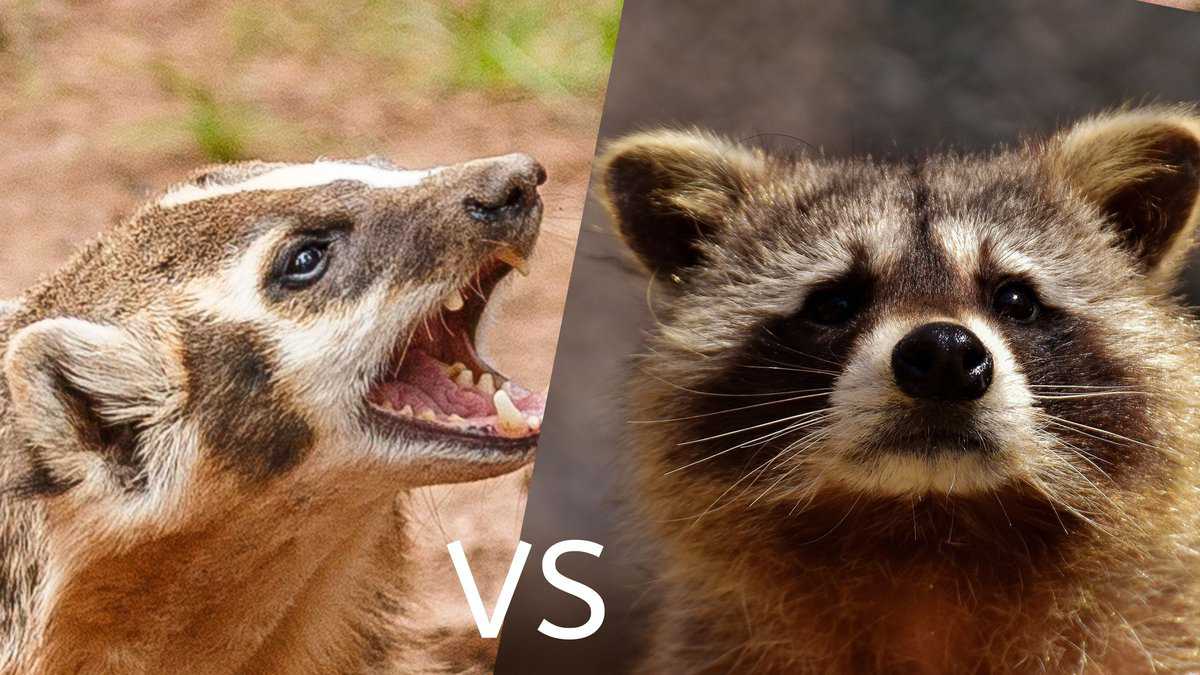 The American badger (Taxida taxus) and the raccoon (genus: Procyon) are two mammals that are unrelated to each other but they’re roughly the same size, eat many of the same things, and look somewhat similar, are active at night, and live in the same region. They have a lot of things in common but have some distinct differences as well.

So how do raccoons and American badgers compare? And who would win if they got into a fight? Let’s find out:

Where Do American Badgers And Raccoons Live?

Both badgers and raccoons are native to the North American continent. The American badger and its four subspecies can be found in 26 US states (the Great Plains, in particular), some central and western Canadian territories, and the mountainous range of Northern Mexico.

The raccoon is also widely distributed in North America, Central America, and South America. Through introduction and cases of escaping from captivity, raccoons can now be found in the wild in Europe and some parts of Asia. There are at least 22 known subspecies of raccoons found all over the world, even on remote islands.

While American badgers and raccoons don’t live in all the same places, they do overlap, and it’s very likely that they sometimes meet in the wild!

How Big Are Badgers Compared To Raccoons?

The American badger may look larger than a raccoon at the first glance but it may be due to the badger’s stocky build. In reality, there’s not much difference between a badger and a raccoon size-wise.

The American badger’s adult length is about 20-34 inches with the tail adding approximately 4-6 inches. An adult raccoon has a body length in the range of 24-38 inches, including the tail.

As you can see, the length of both animals is almost exactly the same. While the badger mostly walks around on all fours, close to the ground, the raccoon is known to sometimes stand upright, which might make it appear a little taller, if not bigger.

In extreme cases, both animal species can weigh as much as 60 pounds apiece.

Some people may find it difficult to distinguish a badger from a raccoon as both look alike at first glance. But if you look closely at both animals, there are easily-identifiable differences.

The badger has a short and stout body, short muscular legs, long, curved foreclaws and shovel-like hind claws. The badger’s limbs are best suited for digging.

The raccoon, on the other hand, has also a triangular face but is covered with gray to brown fur. It also has a white stripe that runs from the forehead to its nose. The nose has white fur around it as well. Another distinct characteristic of this fuzzy creature is its bushy tail with black-colored rings around it. The raccoon is known for the black mask of fur that covers its eye area.

Raccoons have a stocky torso with short limbs. Their back legs are longer compared to their front legs. They have black paws as if they’re wearing black gloves. They use their front legs to manipulate and grasp food and other items.

Differences in Appearance Between American Badger and Raccoon

To sum it up, here are the distinguishing physical features that separate the American badger from the raccoon:

How Fast Can Badgers And Raccoons Run?

Badgers are slightly faster runners than raccoons. Despite their looks, badgers are actually quite agile when running. They can run or gallop at speeds of 16-19 mph. The American badger uses its speed when hunting for prey or running away from predators.

Raccoons are not slow runners either. Their running speed can reach up to 15 mph if they want to. What takes the cake though, is the fact that raccoons rarely want to run. They prefer paced walking to running while casually finding their next meal. It seems like the raccoon will only run when threatened or when trying to get away from predators.

So while they’re both fast, they have different running styles. American badgers are not afraid to put in some effort, whereas raccoons are a bit lazier when moving around.

How Do Badgers’ And Raccoons’ Senses Compare?

This is a “touchy” topic so we’ll talk about the raccoons first. As nocturnal creatures, raccoons have excellent night vision and a very good sense of hearing. However, their extremely sensitive sense of touch sets them apart from other carnivores.

The raccoon’s front paws have highly developed nerve endings. They use their paws to rub and roll objects in their hands as if studying every detail of them. It is said that the raccoon’s forepaws are its second set of eyes which they use for identifying food.

The already very heightened sense of touch of the raccoon is accentuated by water or moisture. Biologists believe that raccoons have a habit in which they tend to “wash” their food before eating it. It is in fact, a way for raccoons to increase the sensitivity of their paws in distinguishing their food.

Now, let’s talk about the badger. These nocturnal critters have keen vision, an acute sense of hearing, and a very sensitive sense of smell. The American badger uses these senses primarily to find their prey. You could say that its senses compare to those of the raccoon, except for the sense of touch which isn’t nearly as developed in the badger.

What Are Badgers’ And Raccoons’ Main Prey?

Both the American badger and the raccoon have a wide variety in their diets. These animals will eat anything they can find. Both are omnivores and will consume meat, plants, insects, and fungi.

The badger is primarily a hunter while the raccoon is mostly a gatherer, which means that the badger might eat a bit more meat than the raccoon.

Nonetheless, each species has its favorite types of food. The American badger’s food of choice is small mammals like ground squirrels, prairie dogs, rodents, and other burrowing animals. The raccoon, on the other hand, loves to eat small animals that live in or near bodies of water like frogs, crayfish, clams, and snails.

Who Would Win In A Fight Between An American Badger And A Raccoon?

You’ll probably think that a fight between the American badger and raccoon will be a tough match and a toss-up. Both have similar sizes and are fierce creatures. They even look alike.

Despite the similarities, the clear advantage goes to the badger. The main difference between the two species is their behaviours which will also be the turning point if a badger and raccoon square off against each other.

The badger is an expert hunter and able to take down prey similar to its own size. Yes, the badger is looking at you, raccoon. Badgers are known to include raccoons and their kits on their menu.

The oftentimes friendly raccoon, very seldom hunt for mammals. It is not in any way, prepared for a fight with the badger and would just use every opportunity it gets to run away. That’s not a bad idea!