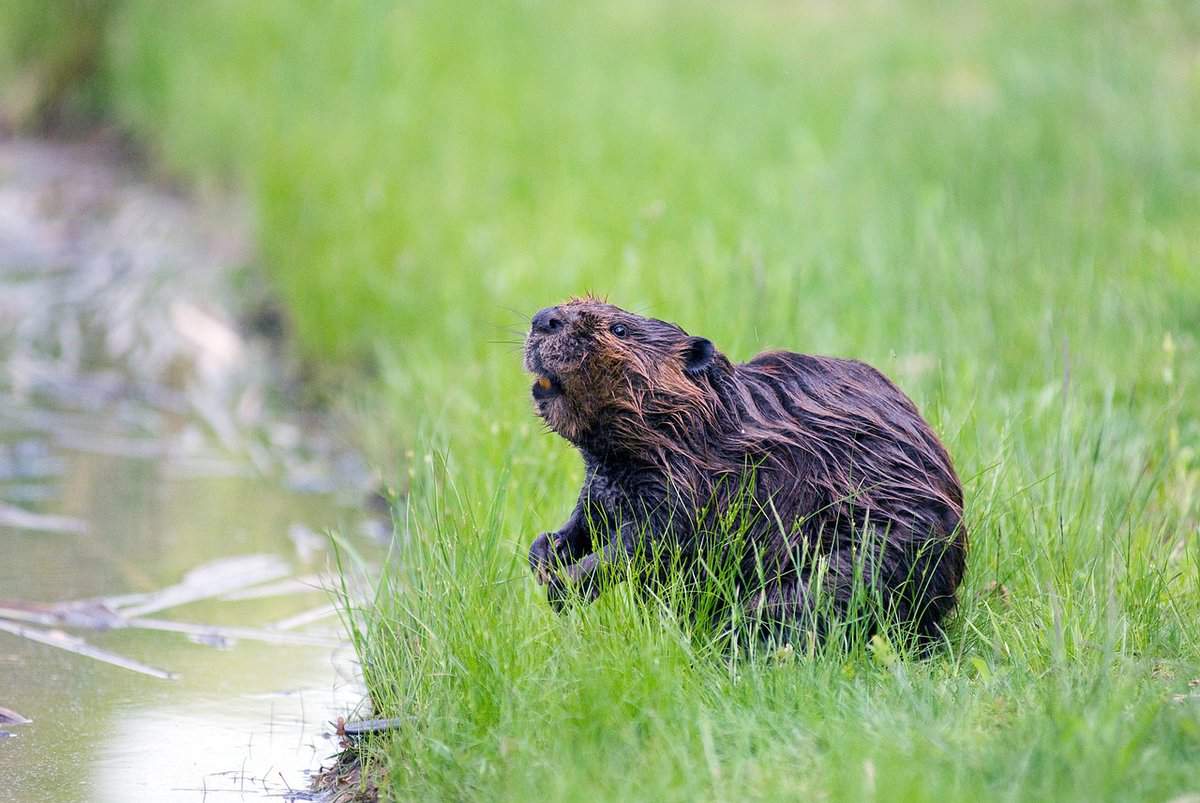 Talking about the beaver’s poop sounds somewhat stinky but it is a very interesting topic. The North American beaver (Castor Canadensis) is a pure herbivore. Its favorite foods are tree bark, roots, and leaves of plants found in the wetlands.

With all of these fibers and plants, you can probably already imagine what beaver droppings may look like – keep reading and we’ll teach you everything you didn’t know about beavers and their poop!

The beaver’s poop or scat looks like sawdust pellets and can – in rare instances – be found scattered across the water and the edges of their habitat. You can rarely find beaver scat inland. Take note, however, that finding beaver poop is generally not easy.

You can quickly identify beaver poop by looking for its distinct characteristics that you’ll find listed below.

The pellet-shaped beaver droppings are ¾ inch to 2.5 inches in length. They are either round or elongated. As beavers are the largest rodents living in North America, the size of their poop is larger than those you see in rats and mice.

What Color Is Beaver Poop?

Beaver poop has a light brown to dark tan color. The color hues of the droppings depend on the food the animal eats. If this semi-aquatic rodent eats light-colored bark and leaves, the poop color would be lighter.

The color of the poop is usually darker when fresh then turns pale and whitish as the droppings age and dry out.

The color also changes depending on the state of digestion. Dark-colored beaver scat has only been digested one time, and normally, beavers will eat this to digest it a second time! The second time around, the scat is lighter in color!

The beaver’s poop appears as a lump of plant parts and wood chips that are glued together. There’s a chance that the droppings you find are hardened and dry.

Soft poop is oftentimes reingested by the beaver, similar to what rabbits do so that it can digest it a little better and get as many nutrients from its food as possible.

How Do Beavers Poop?

Beavers poop when they need to go, just like any mammal. However, there are a few interesting things about the beaver and its pooping behavior.

Do Beavers Poop A Lot?

Beaver scat is not commonly seen. But like most herbivores, beavers need to eat a lot to get enough nutrients and energy out of the very fibrous food, so naturally, a lot of food passes through their digestive system.

In other words: Yes, they do poop a lot!

Will Beavers Always Poop In The Same Place?

Beavers don’t poop in the same spot. Like most rodents, beavers poop wherever and whenever they feel like doing it. They can do it in the very pond they swim and live. They poop while building their dams, lodges, and bank dens. Heck, beavers poop even inside their homes—in the same spot where they sleep!

Don’t be alarmed though as there’s a good reason why beavers poop indiscriminately. They don’t see their poop as waste. In fact, beavers are economical creatures and use every bit of material in their surroundings for their advantage and as means of survival—including their poop.

Even though it doesn’t sound very appetizing, beavers are known to eat their poop after it first passed through their digestive system in order to digest it a second time. The second time they poop, they’ll instead use the waste as a building material!

Do Beavers Poop In Their Lodges?

Lodges are structures that beavers build using sticks, wooden logs, and mud in the middle of ponds. Each lodge has a large interior chamber and is usually elevated above the water line. A whole family of beavers usually lives inside such a lodge. Lodges are important structures where beavers live, rear their young, and sometimes poop.

Beavers do indeed poop in their lodges, but since beavers are pure herbivores, their droppings aren’t as disgusting and bad smelling as the poop of many other animals, which is why beavers don’t mind hanging around where they poop.

If you think what you’ve read so far is weird, get ready to be surprised.

Coprophagia, or the practice of eating one’s poop, is quite common not only among rodents but all throughout the animal kingdom. Disgusting as it may sound, coprophagia is a very important practice and source of nutrition for the beaver.

The beaver will only eat the fermented undigested type of poop (cecotropes). Such undigested materials appear dark-colored, soft, and mushy.

Do Beavers Only Poop In The Water?

Beavers poop in the water most of the time although not exclusively and on purpose. These rodents don’t choose the places where they poop. The water is just where they usually hang out.

Are Beaver Droppings Bad For The Water?

The answer to this question depends upon the health of the beaver itself. If the beaver is healthy and isn’t sick or has parasites, then the droppings aren’t bad for the water.

On the other hand, parasites like Giardia lamblia can be found in animal droppings, including that of the beavers. These parasites can be harmful to humans as well as to other animals that ingest the contaminated water. The disease caused by Giardia lamblia infection is called Giardiasis or beaver fever.

It is a misnomer though to call the disease beaver fever as the poor rodent is also a victim in this case. Giardiasis is highly contagious and widespread among animal wildlife all across the world.

Do Beavers Mark Their Territory With Their Droppings?

Beavers are highly territorial but do not mark their territories with their droppings. They instead use castoreum, which is somewhat similar to urine, and secretions from their butt glands. Their poop can contain small amounts of castoreum but pooping is not a way of marking their territories.

Castoreum is a sticky, yellowish to grayish-colored, oily substance produced by the castor sacs of adult beavers. They spray this chemical on their surroundings as a form of territory marking. Both male and female beavers use castoreum. The color of the castoreum will vary according to the sex and beaver species.

Castoreum has a long and rich history of use for humans because it quite surprisingly smells like vanilla! That, however, is a story not related to poop. Perhaps a story for another day.

The scent of beaver poop is unique and pleasantly smelly. It doesn’t smell awful in any way. Beaver poop has a musky, leathery scent similar to those of expensive leather bags of your Aunt Hilda.

Due to the presence of castoreum and the exclusive plant diet of beavers, the scent of beaver poop is actually pleasing to the nose.

Do Beavers Leave Other Scents Than Poop?

How Do Beavers Urinate?

Beavers urinate through their cloaca. Their process of producing and excreting urine is similar to other animals. The characteristic that separates them is the beaver’s ability to mix castoreum with their urine to mark their territory.

This seems like a funny question. Why would one try and smell a beaver? Anyways, if you’re up to the task, beavers actually have a pleasant smell. And that is due to—you guessed it right—castoreum!

Beavers surely take pride in this unique oil of theirs. The animals use their forelimbs to wipe castoreum from their butts, and then massage it throughout their body. Humans may not be able to detect it but beavers have a superior sense of smell. They can distinguish friends or foes just by smelling each other.

So to answer the question— beavers smell like beaver butt and that’s actually a pleasant odor!