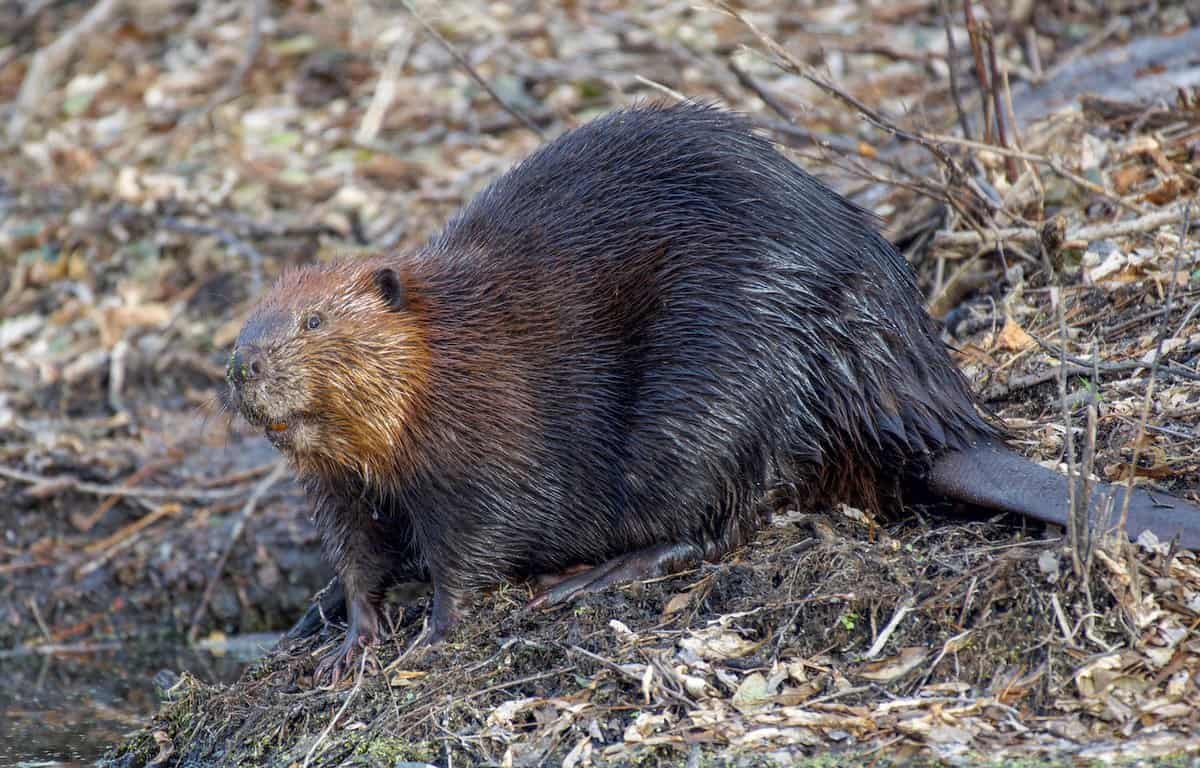 Beavers are some of North America’s most unique animals, not only because of their intelligence and behavior but also because of their appearance. What sets these little guys apart, aside from their large teeth, are their unusual-looking tails.

Beaver tails don’t just look cool; they are also handy tools critical for survival. Just as their teeth are for cutting down wood, their tails help them with essential functions. Keep reading, and we’ll explain the tale of these tales.

If you think of tails on a mammal, you would generally think of them as having the same fur as the rest of their bodies. But, in beavers, their tails look completely different from their bodies and seem like they came from another animal.

Their tails are broad and flat, like the paddle on a row boat, and look nothing like their bodies. While beavers’ bodies are usually coated in thick brown fur, their tails are black and covered in scales.

Although sizes vary between individuals, beaver tails are around 7-13 inches long and 2 inches thick at the base—however, the tail tapers to about 0.24 inches at the tip.

Do Beavers Have Furry Tails?

Probably the thing that makes these rodents’ tails unique is that their tails are covered in scales instead of hair. These scales have a dark, almost black color and a rubbery touch that would not be out of place on a snake.

Why Are Beaver Tails So Big?

Compared to other animals, the beaver’s tail is huge in proportion to its body. A beaver’s tail can make up around a quarter to a third of the little guy’s overall length. Although it might look odd, its design is brilliant since it serves multiple purposes.

One reason is because of balance. Unlike most mammals, beavers can stand upright but they need a counterweight to balance their bodies. Having their tail be that big can help prevent them from falling over.

Aside from that, beavers will also use their tails to speed up swimming, storing fat, and communicating in the water. All of these require a large tail to be as effective as possible.

Do Some Beavers Have Thin Tails?

No, all species of beavers have broad, flat tails. If you see a beaver with a long tail, it’s most likely a muskrat. People often mistake these two animals because of how similar they look. You should check their tails to tell them apart if you see one of them. Muskrats’ tails are very long and thin, like a rat’s.

Aside from length, these two mammals also differ in their appearance. Beavers’ tails are hairless and covered with scales, and Muskrat tails are covered in short black hair that runs along the entire length. It can be hard to tell from a distance, but muskrat tails have a furry texture if you touch them.

What’s The Function Of A Beaver’s Tail?

Although we often associate beavers with their teeth, their tails are their most important body part. The reason for that is beavers use them for various functions, from helping them move and balance to keeping them alive during winter. Without their tails, beavers would struggle to get by.

Do Beavers Use Their Tails For Swimming?

Yes, one thing that makes beavers such excellent swimmers is their tails. The overall shape of their tail allows them to act like rudders of a ship, propelling them forward as they swim. This works by having their flexible tails move up and down, pushing them forward in the water.

Their tails and webbed feet can cause beavers to reach speeds of up to 6 miles an hour. Aside from propelling them, the scales are more water resistant and less likely to get sodden and weigh them down, unlike a regular tail.

Can Beavers Regulate Their Body Heat With Their Tail?

Yes, one lesser-known function of these little fellas’ tails is the ability to regulate body heat. Research suggests that their tails play an important role in reducing the beaver’s body heat.

The reason for that is since the beaver’s tail is hairless, it can release its body heat whenever the beaver needs it. This significantly helps the beaver from getting overheated in the summer.

Beavers Make Noise By Slapping Their Tails Against The Water

Yes, beavers can use their tails to communicate with each other. That is why you often find beavers slapping their tails against the water. They raise their tails and slap them down, making a loud bang, and sending ripples across the water.

Because their tails are broad and heavy, it makes a louder sound than the tails of other mammals.

There are usually two reasons why beavers make these sounds: first is to warn their families if predators are nearby. When beavers hear this, they typically dive underwater to try and hide from the danger or flee inside their lodges.

The other reason they might do this is rival beavers nearby. Since these marine mammals are very territorial, they might try and intimidate challengers by making loud noises.

Although their tails are versatile, there are limits to what they can do, and using their tails as springs is not something they do. While swimming, beavers might use their tails to direct and give them a boost, though that is more like a rudder than a spring.

Their tails are even less helpful as a spring because beavers are clumsy on solid ground. They often move in a slow waddle and need their tails to maintain balance, so they won’t be able to use them to move forward.

Can Beavers Use Their Tail As A Weapon?

Not quite a weapon, but more of deterrence against predators. If a beaver senses danger, they use their tails to send signals to other beavers by banging them against the water, but the sound is also intended to startle predators and hopefully scare them off so the beavers can escape.

However, you won’t see them swatting their tails around and trying to slap predators with it. Using their tails as weapons is too impractical. If beavers are pushed to a fight, they will instead use their sharp teeth to protect themselves.

Why Do Beavers Sometimes Sit On Their Tails?

Many people often find beavers with their tails tucked between their legs. Aside from being adorable to look at, beavers do this to maintain balance. While graceful in the water, beavers are incredibly clumsy on land and need their tails to help keep them upright.

Their tail will act like a brace, keeping them in place, standing or sitting. Support like that is vital when chopping down wood because their tails keep them balanced for long periods.

Do Beavers Really Store Fat In Their Tails?

Some researchers have noticed that the size and appearance of a beaver’s tail correlate with the animal’s weight. For example, obese beavers have swollen tails while lean beavers have shrunken tails. They realized that this is because beavers use their tails to store excess fat.

If you look inside a beaver’s tail, you will find a layer of fat beside the muscle bed. Like other animals, beavers need to bulk up on fat before winter to survive. Since their tails are large, they make for ideal fat storage areas. The little guy’s tails can increase the amount of fat beavers can store by up to 60%.

Do Beavers Use Their Tails to Carry Mud?

Only in cartoons! No, it is a common misconception that beavers use their tails to carry the mud to their dams. How it’s supposed to work is that a beaver will use their tail like a shovel and scoop up dirt. They then carry it to their lodge or dam and rub the mud over the twigs to support the structure.

However, this is not something they do in real life, and their tails aren’t able to move like that.