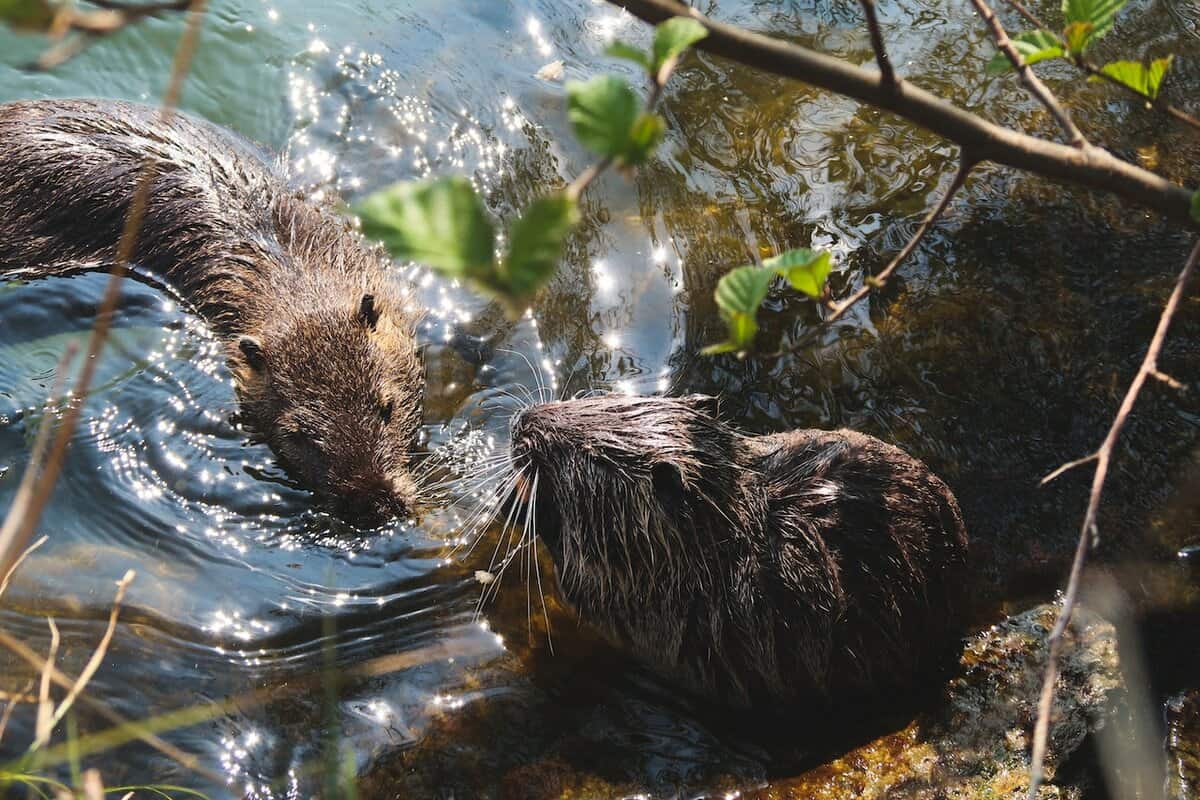 The American beaver (Castor canadensis) is a semi-aquatic animal that belongs to the Rodentia family. This mammal is an excellent swimmer and thrives in freshwater habitats with lots of vegetation at the water’s edge.

As common as the beaver’s types of habitats are, one might wonder if the rodent is as common a sight as its smaller relatives. Where can we find beavers?

Join Floofmania’s global tour in discovering the places where the beaver can be found today. Who knows, maybe beavers can be found close to where you live!

Are There Beavers All Over The World?

The North American beaver is endemic to the North American continent with a range and distribution covering three countries (Canada, the US, and Mexico). They inhabit ponds, slow-moving rivers and streams, marshes, and other forms of wetlands in North America.

There are only two living beaver species today. Aside from the American beaver, there’s the Eurasian beaver (Castor fiber). Both species were once abundant and widely distributed across several continents (North America, Europe, and Asia) but were driven to near extinction at the start of the 20th century.

Today, the numbers of these resilient rodents have fortunately started to rise.

Where In The US Can Beavers Be Found?

The American beaver can be found in almost all of the 50 US states. There are just a few areas where the beaver is rarely seen or totally absent. This is a very long list so let’s better get started.

US States With Beavers

US States With No Beavers

Although the beaver can be found in all but one US state, there are areas in these territories where the rodent cannot be found. The following are specific places without beavers living in them:

Are There Beavers In Canada?

The beaver is native to Canada. They live in rivers, creeks, and lakes of floodplain habitats all across the country. They can oftentimes be seen in creeks of urban and suburban cities as well.

It is estimated that there are 6-12 million beavers in Canada. The largest concentration of the beaver population is located in British Columbia.

Beavers love to build “beaver structures” and change their own environment to their liking. Using logs, twigs, leaves, and mud, the rodents build dams, canals, and lodges that greatly impact the ecosystem and all the species living with them.

An average beaver dam in Canada ranges from 32 to 328 feet long. However, in Alberta’s Wood Buffalo National Park, satellite imaging has discovered the largest and longest beaver dam measuring 2788 feet. Perhaps we can call it the “Great Beaver Wall of Alberta”.

Can Beavers Be Found In South and Latin America?

Beavers are not native to South and Central America. However, there was an incident in which 20 beavers from Canada were introduced to Argentina in 1946.

The fur trade never happened while the beaver’s population exploded at epic proportions. What made the situation worse was the miscalculation of the effects of the animals’ presence in Patagonia. The soldiers did not know much about the beaver’s behavior and its relationships with other species in their natural habitat.

Beavers do not have any natural predators in Argentina, and the rodents’ population cannot be controlled, so they quickly dispersed across the wide steppes and forests.

Moreover, the plants and trees in Argentina are far different from the fast-growing trees found in Canada. Willow, beech, and alder trees quickly resprout while the South American trees do not.

The Canadian trees’ saplings also produce chemicals to protect themselves from the beaver. That’s the reason why beavers leave the small trees alone. Their South American counterparts do not have such a defensive mechanism.

In the aftermath of the beaver’s destruction of the southern Argentinian plant life, all that was left were the 31,000 hectares of barren lands.

In addition, the beaver supported the proliferation of two other invasive species—the muskrat and the mink. What is happening in Argentina now is what scientists call an invasive meltdown process in which native species are getting wiped out by invasive species.

That’s not all! By the 1960s, the beaver invasion spread to the neighboring territories in Chile. Since the 1990s the beaver’s presence has been observed on the Chilean mainland.

Are There Beavers In Europe?

The Eurasian beaver once lived across several countries in Europe and Asia. Due to overhunting, their numbers plummeted to a mere thousand during the early 1900s.

Today, the rodents are living in small numbers across the following countries:

Since then, the Eurasian beaver has come back strong. Their numbers today are estimated to be over 30 million in Europe and some parts of Asia.

Beaver Reintroduction In The UK And Scotland

The Eurasian beaver went extinct in the UK in the 1600s. But through legal and illegal reintroduction, the beaver can now be seen in the areas of Cornwall, Kent, Devon, and several areas in Scotland.

There are also several beavers kept in a 60,000 square meter enclosure in Enfield. Plans are on the way for the release of the animals into various areas in the UK.

Due to the rapid decline of the Eurasian beaver population in the 1930s, several North American beavers were introduced into Finland, Sweden, Poland, France, and Russia.

In 1935, repopulation efforts in Finland reintroduced a number of Eurasian beavers in 5 locations in the north and southwest areas of the country. The beavers were coming from Norway which saved about 100 remaining individuals.

The number of Eurasian beavers sent was not enough for the repopulation program. The requested number of additional beavers could not be provided by the Norwegian government. As a substitute, American beavers from New York were used to repopulate some areas of Finland.

Ten years after the reintroduction program, live-trapped beavers were released in the north and eastern areas of Finland. The beavers released on the eastern side rapidly spread to the Russian town of Karelia.

In the succeeding years, more American beavers were released in Finland and Karelia. By 2003, the population of American beavers, in Karelia alone, had reached 8,000 individuals. For unknown reasons, the Eurasian beaver in the area was only 1,500.

One thing that has bothered scientists is: that the growth of the Eurasian beaver population is severely hindered whenever the American beaver is around. There seems to be competition between the two species. The conclusion was both species cannot coexist. One must be removed in order for another to thrive. Sorry, American beaver!

It was only several decades later that scientists discovered that each species has unique features the other doesn’t have. For starters, the Eurasian beaver has 48 chromosomes while the American beaver only has 40 chromosomes!

Are There Beavers In Australia?

There are no beavers or any related species in Australia. The rodents that can be found in the continent are all from the rats and mice family. The Australian continent geographically is separated from the rest of the world—and that has been going on for hundreds of millions of years.

Its plant and animal species and ecosystems are also quite unique. Through evolution and natural selection, the endemic animals have maintained the balance in the environment they’re in. So species similar to the beaver do not have a place in Australia.

Strict Australian laws also prevent the introduction of alien species into the country. One cannot bring any plant or animal to the country without extensive scrutiny. However, there are still animals that have been purposely brought in legally or otherwise. The beaver though is not one of them.

Can Beavers Be Found In Africa?

You cannot find any beavers in Africa. The African continent has a variety of rodent species but none of them look or behave like beavers.

Are There Places Where Beavers Are Considered An Invasive Species?

Invasive species are animals and plants that are not native to a given environment. The presence of invasive species can alter habitats and entire ecosystems. This is what happened in Tierra del Fuego in Argentina and in Chile when beavers were introduced in the 1940s. The same can also be said with the American beaver’s introduction in Russia, Finland, Poland, France, and Sweden.

American beavers are a resilient bunch. As invasive species, they are highly adaptive animals that can survive and thrive in non-native environments and make them their own. It’s just too bad that their world-renowned engineering skills have instead destroyed habitats and displaced other species.

Cute and cuddly they may be, beavers are animals you don’t want to invade places they don’t naturally belong.