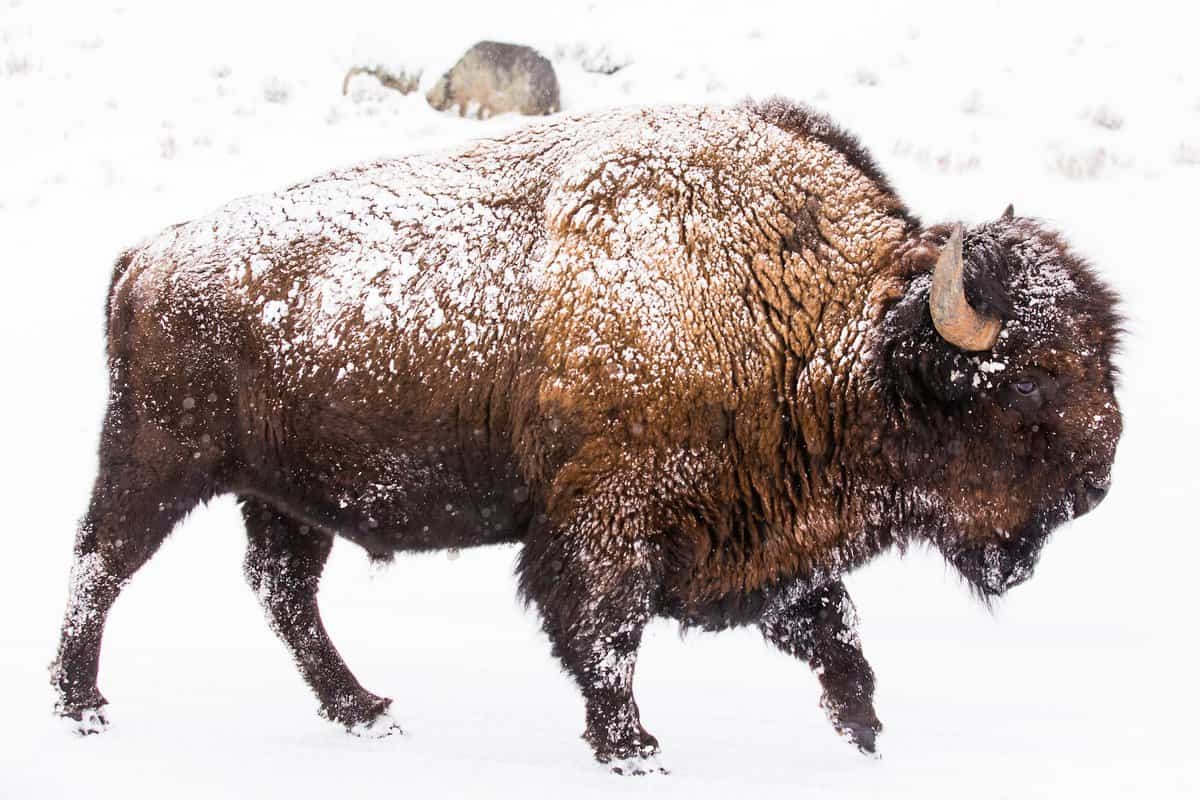 Bison are massive and imposing mammals, which populate the plains and grasslands of the US and Canada. They have stood the test of time since prehistory.

The bison is no doubt hardy, but how exactly do they cope with the chill of winter?

Do Bison Live In The Cold?

Bison are perfectly adapted for living in the frigid temperatures of winter and other harsh weather conditions. They can withstand temperatures well below the freezing point. In fact, bison are much better adapted to the cold than they are to the heat.

They are also known to do well with strong winds that could be devastating to other animals, hunkering down in the middle of storms until they pass. Bison are simply extremely well adapted to the cold, through their general lifestyle, fur, and of course, sheer physicality.

Ever since they arrived from Asia 195,000–135,000 years ago, they have made a home in North America, where at some point they numbered in the millions. It is safe to say that they are built for the cold of North American winters for them to have flourished as they did.

Although not as numerous as they once were due to hunting, bison are thriving well again due to conservation efforts together with their innate adaptability.

How Are Bison Adapted For The Cold?

Bison are very well-adapted to the cold. During winter when food is scarce, they use less energy by slowing their metabolism and minimizing their nutritional requirement.

You could say, in a way, that they are scrimping on food, not merely by eating less, but by changing how they convert their food into energy.

Another nifty strategy lies in their stomach; the mere fact of having to digest their food creates heat, which helps them stay warm.

Because the plants they eat are much more difficult to digest during winter (due to their own adaptive changes), food stays in the bison’s stomach longer, and this is taken advantage of by the bison’s system to keep itself warm.

How Cold Is Too Cold for A Bison?

Bison are able to withstand temperatures as low as -40 °F! The cold never bothers them it seems! It goes without saying that anything colder than this will start to become a problem.

Video on bison in the winter:

As a form of insulation from extreme cold, bison do grow thicker woolly coats in winter, which they shed in spring. This coat is so effective at keeping the cold out that you’ll see snow gathering on it without melting from the warmth of the bison’s skin.

This is why you may have seen bison with thick layers of frost on their shoulder bumps, going about their business without any signs of discomfort! It is no wonder why their pelts were a top choice for winter clothing and tent covering in ancient times, and apparently as part of luxury clothing in the present day.

Furthermore, their skin also thickens in the cold season, and with the aid of fat deposits, they further stay protected from the intense cold. This way, bison can keep warm and toasty from the outside as well as inside.

Are Bison Active During Winter?

Although their movements are much limited in winter, bison continue to forage and search for whatever grass may still be found under the snow.

However, they don’t spend as much time foraging as they do during warmer weather to help keep their energy reserves.

Because of the bigger bison’s massive size and ability to drive snow out of their way, their movements strategically make up trails for other smaller animals to move and reach areas that they otherwise may not without the bison’s help.

This is helpful for both juvenile bison in the herd, but also other wildlife in the general area. This is crucial in the height of winter when snow piles up several feet high, making movement doubly difficult.

How Do Bison Behave During Cold Climates?

Particularly in the Yellowstone National Park, bison will settle on a particular area in which to forage in herds (of about thirty or more) or bull groups of a dozen or less. They also prefer to stay close to areas that are naturally warm, like geysers and hot springs.

As you may have guessed from the above, bison do not have to hibernate in winter. Unlike other animals who need to be in an inactive or dormant state to conserve energy, typically during winter, bison continue to feed and move about. They still forage in herds as they do throughout the rest of the year.

Do Bison Migrate To Warmer Places In Winter?

Despite roaming and grazing vast distances, bison do not migrate to warmer areas or climates to avoid the bitter winter cold. What they do is move to more favorable areas where the snow is not too deep and the cold is not as unforgiving.

Do Bison Change Their Color In Winter?

Bison’s typical color of dark brown to almost black does not particularly change in winter, even though it does grow much thicker fur. However, hair prominently lightens as it ages.

The shedding of this old hair happens around spring when the extra insulation is not needed as much, although patches of winter fur may still be seen until mid-summer.

Calves, or baby bison, have a reddish tan/orange coloration, earning them the moniker ‘red dogs.’

What Do Bison Eat In Winter?

Bison mainly feed on different grasses and sedge in the winter, which is the same food they eat throughout the year.

With the aid of their large heads and powerful shoulder muscles, they graze under thick snow like a specialized snowplow to get to their prized grass for sustenance. They are known to dig in as deep as four feet of snow!

Will Bison Fatten Up Before The Cold Months?

Just like many other animals, bison do bulk up when the food supply is more abundant to prepare for the scarcity and the cold of winter.

Reaching a weight of up to 2000 pounds and a height of up to 6 feet by the shoulder, the bison can be formidably massive at its peak size. Males, called bulls, are significantly larger and have thicker fur compared to females (called cows).

With extra fat and substantial body weight as well as a thick coat of woolly fur, these huge creatures deal with winter like it was any other season.