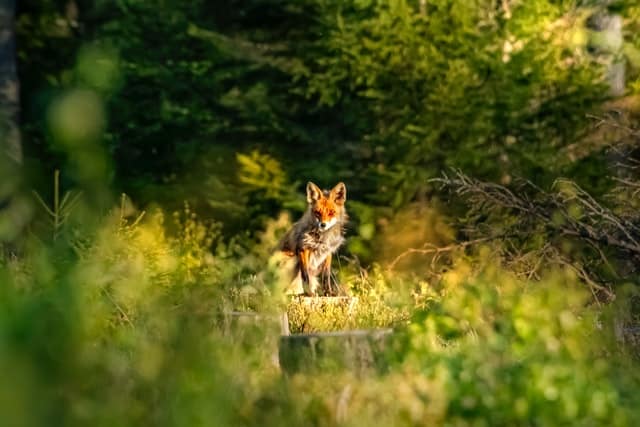 Foxes tend to get a bad reputation, but they’re mostly harmless and very angelic creatures. It is not their mythical cunningness that has allowed them to live beside humans, but rather their ability to adapt to changing conditions. This means that now you can sight foxes whether you’re in the peaceful countryside or the bustling city center.

First and foremost, foxes hunt. Therefore the best way to attract them is through food. Bait can be laid out at any time of year, but you’re more likely to spot foxes during the winter months when food sources are more sparse. Leading on from this, the smell of food will lure them in.

You can also provide shelter for foxes to rest or nurse their young. Since they are generally wary animals, they are not likely to get too close to humans, especially with cubs. It is important that the shelter is a good distance away from your house so that the foxes are not scared off.

Why It Might Be a Bad Idea to Attract Foxes

As with any mammal, foxes can theoretically pass diseases onto humans. However, there are very few reported cases of people becoming infected via foxes, and there is a much larger chance of picking something up from your dog or cat.

The two fox-borne zoonoses that are most important are rabies and alveolar echinococcosis, both of which have been eradicated in the UK, but not in the US. Rabies attacks the nerve cells of the brain and can be passed through a deep bite from an infected animal, whereas alveolar echinococcosis is a disease caused by tapeworms found in foxes.

Although foxes are susceptible to other viruses or parasites, they are generally only passed through urine or feces, therefore, can be avoided with proper hygiene.

Foxes Can Be A Danger to Some Livestock

It is very unlikely that foxes will harm larger pets such as cats or dogs. In fact, household cats will often encounter foxes when outside and the two tend to ignore each other. On the other hand, if you keep smaller animals or livestock outside, such as chickens, guinea pigs, or rabbits, then the fox will target them as food.

It is important to make sure your animals are in a secure area that foxes cannot gain entry to, for example, a high fence both above and below ground. Foxes can fit through spaces of 4″ or less and scale walls of over 6 feet, so fox-proofing your pen requires a lot of attention.

Trampled flowerbeds are most common during springtime as there are young cubs around that simply love to play in nice-smelling plants. Although harmless, this can be annoying for avid gardeners who put a lot of effort into their work. If this is happening, block off all entrances to your garden that foxes could access. Try to avoid using netting or garden lines as often cubs get entangled.

Preventing fouling or holes is more difficult. You could try a mammal repellent, but at the end of the day, foxes don’t know any better. They dig for food and defecate to mark their territory regardless of your lawn.

One of the most rewarding sights for wildlife lovers is young fox cubs appearing for the first time in your spring garden. Even an adult fox on its own is beautiful. Foxes are well-known for showing up in gardens or sleeping on sheds. With patience and care, you can have them in yours as well.

Although foxes have adapted to several environments and can now survive in both urban and rural areas, their lifespan has been greatly shortened by traffic collisions. A fox can live for up to 8 years, but in cities, its average lifespan is only 18 months. Because of this, it’s important not to domesticate them which could harm them further.

Foxes Keep Other Animals Away

Foxes are great for natural pest control. If you find that you have a rodent problem in your home, (rats), attracting foxes will help keep the population down. Whilst foxes are sometimes considered pests themselves, they serve their purposes. They also hunt raccoons, possums, and porcupines which can prevent the appearance of these critters around your home too.

Attract Foxes With Food and Drink

Leaving bait out will give you the best chance of attracting foxes, but it’s not likely to happen straight away. Unless the fox is really hungry they will take their time approaching the food. Although foxes are active during the day, they do most of their foraging at dusk or dawn.

For this reason, it is best to leave food out at night rather than during the day. This not only increases your chances of attracting foxes but also prevents other daytime animals from taking the food.

The stronger the bait smells, the more appealing it becomes to the fox. Foxes eat a range of things and can often be attracted simply by wet dog or cat food – but raw meat, fish, cheese, or eggs remain the favorite choice. In the wild, they will also feed on a mix of fruits or nuts, but due to the lack of odor, they don’t make for good bait.

It is also a good idea to leave out a water source. Some wildlife spotters will make a pond in their backyard to provide a permanent drinking spot, but you can also just place a bowl of water next to the bait if you don’t have the resources for a pond.

It is important to remember, that whilst feeding foxes is fine, you must not try to befriend them. Foxes are wary of humans for a reason, and if they become docile they will lose their instincts and ability to hunt.

You can create shelter for foxes in many ways. They will not only use this as a place to sleep but also a place to hide. Some ideas include planting shrubbery. Having thick bushes gives foxes the opportunity to sneak through your garden unnoticed.

In the wild, foxes will often make home underneath or amongst logs, so recreating this in your garden could help attract them. Make sure you build the structure in a dry place away from the wind and allow enough space for the fox to fit inside.

Lastly, you can make a compost pile. Whilst to humans the smell is rather unpleasant, it’s a dream come true for foxes. It mimics their natural habitat and lures live prey into the area.

Do Some Smells Attract Foxes?

Foxes are attracted to strong or sweet odors. As mentioned above, the smell of meat or fish will often lure them in. You can also coat vegetables in natural sugar, such as honey, to make the bait more enticing by the smell.

Bear in mind that there are also smells that foxes dislike, so if your home dominates any of these smells it will make it a lot harder to attract them. Most predominantly, foxes hate the smell of hot peppers. A mixture of peppers and water is often used as an effective fox repellant but isn’t helping the other way round.

They will also avoid your garden if there are strong smells of chemicals or humans. The smell of humans can be very hard to get rid of, so for this reason, it’s recommended to keep the bait and shelter a good distance from your home.