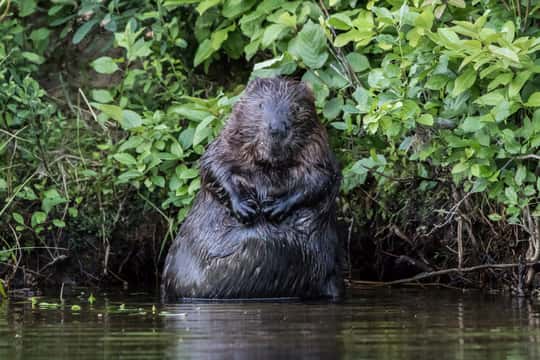 One of the most recognizable creatures in North America, the beaver has quite a distinctive coat that is famous all over the world. Its fur is specially adapted to allow it to stay warm and keep off the water as it swims, but it also has historically been quite a prize for hunters and traders.

There are many things that make the beaver a very special animal and its fur is just one of them. This article will go into detail about the fur that beavers have, including its characteristics and how beavers groom and maintain it, as well as some interesting information on the history of beavers in the fur trade.

North American beavers have yellowish-brown fur which is specially designed for warmth and water protection. Their coat consists of two main layers: a softer, dense underfur which is a light brown color, and longer, darker outer hairs that are stiff and protective.

Combined, these two layers act almost like a wetsuit for the beaver and are perfect for a life spent in and around the water.

Is A Beaver’s Fur Waterproof?

In order to keep their skin warm and dry when they are swimming, a beaver’s coat is very waterproof. The fur itself isn’t waterproof on its own, instead, beavers actually cover their hairs in a layer of oily “castoreum” which stops the water from passing through to the skin.

A beaver’s fur is, therefore, a bit oily, but not in a slimy way. As is the same for many mammals that spend a lot of time in the water, the oil on their hairs is a thin, protective covering rather than a thick layer. To the touch, beavers have very soft fur, which is why their coats have been worth so much money in the past.

Another fascinating aspect of a beaver’s coat, which provides extra protection against the water, is the shape of its hairs. The finer hairs in their undercoat actually have tiny hooks on them which can bind together, enmeshing and forming a barrier that is able to keep out even more water.

Can Beavers Get Wet?

Beavers do get a little wet, but their waterproofing is surprisingly effective. Beavers can keep their skin dry enough to spend a large percentage of their days underneath the water without becoming too cold.

A lot of water will simply be wicked away by the oily outer layer, but their fur will still soak up a bit of liquid. Very little water will ever actually pass through both layers of their fur and manage to reach their skin underneath.

When on dry land, beavers will often spend a lot of time grooming to make sure that their coats stay as dry and waterproof as possible.

Beavers’ coats are generally variations of the same color: a yellowish-brown which can appear almost as dark as black when it is wet. You can usually see more of a yellow color when they are dry or puffed up because that is when the lighter underlayer of their fur is more visible through the dark outer hairs.

Some beavers are a darker or lighter brown than others, even appearing a bit grayish, reddish, or blackish, but there is not a huge variety in the different coat colors that they have. In general, the North American beaver has slightly darker coloring than the Eurasian beaver, though they are very difficult to tell apart.

Do Beavers Change Their Fur Depending on The Season?

Although they live in temperate regions where the weather can vary dramatically throughout the year, beavers don’t have a winter or summer coat.

Their natural coats provide great protection against the cold and the wet, so they don’t need to change their fur when the temperature starts to fall. Their downy underlayer and waterproofing keep out the cold regardless of the weather.

In winter, beavers are still quite active, and they don’t need to hibernate. They can be just as comfortable in the snow as they are on a warm summer’s day.

The lodges that beavers build also provide them with additional warmth as they are very well insulated. When beavers build their lodges, they line the interior chambers with mud to keep out the cold when they are inside.

Beavers don’t need to shed their fur in the summer months either. Their lodges don’t get too hot and they live in quite moderate climates. If they are ever feeling the heat, they can simply jump into the water to cool off. Unlike many other mammals that live in seasonal environments, beavers’ coats remain pretty consistent all year round.

Why Do Beavers Have Whiskers?

Beavers have long and quite noticeable whiskers, which they use to help them navigate when it is harder to see. Though they might not look like it, beavers are actually very large rodents, like rats or mice. They are almost the biggest rodent species in the world – second only to the South American capybara.

Like most other rodent species, beavers have adaptations to help them navigate difficult situations. When the water is dark, or they are traveling through the narrow tunnels in their lodges, long whiskers help them to identify their surroundings and avoid obstacles.

If the ends of their whiskers touch against a surface, the beaver can tell how far away it is from that surface and move around accordingly, even when they are finding it difficult to see. Underwater this can be particularly useful as it is often quite dark or murky, and getting trapped or injured could be dangerous.

How Does the Beaver Groom Its Fur?

One of the most important pastimes for a beaver is regular grooming. You will often see them maintaining their fur while they are out of the water, and it is not just to stay clean and get rid of dirt.

In order to stay waterproof, beavers need to maintain the layer of oil which covers their outer hairs. This oil, known as a “castoreum”, is produced from glands on the underside of their abdomen. Usually, beavers will sit up on their hind legs and tuck their tails between their legs, then use their front feet to groom themselves.

When they are grooming, beavers use a specialized “split-nail” on the second toe of each of their front feet to comb the oil into the hairs all over their bodies. Beavers groom every day and often give themselves a scrub whenever they are out of the water. They like to groom inside of their lodges but will happily do a once-over any time they are on land.

Beavers will also groom each other, both as a way to reach difficult areas and bond with members of their colony. When they are engaged in mutual grooming, beavers will use their incisors as well as their hands to remove bits of debris from each other’s coats and help with waterproofing.

Are Beavers Hunted for Their Fur?

Historically, beavers have been hunted extensively, for several reasons. Because their coats are so warm and luxurious, beaver fur was a highly prised material that was used to make all kinds of different clothing items, including:

Originally, most of the beaver trade came from Eurasian beavers that were hunted in Russia, Northern Scandinavia, and Central Asia. Evidence for the trade of beaver furs can be dated back as far as Ancient Greece and there is still a market for these furs to this day.

Around the 17th century, the over-hunting of beavers in Europe led to a massive depletion of their numbers all over the continent. The vast majority of beaver furs in Europe were exported from Russia but, by 1600, the trade had nearly run dry. In the United Kingdom at this time, beavers were actually hunted to extinction and have only recently been reintroduced to the region.

Around this time, European colonies were being established in North America. In the early-to-mid 17th century, the North American species of beaver became a new source of furs for the European market. They were incredibly valuable to the new settlers as their coats were nearly indistinguishable from those of their nearly-extinct European cousins.

Beaver hats, in particular, were very fashionable and became an important symbol of social status. The shape and style that you wore could indicate what job you had, how much wealth you possessed, and your position in society.