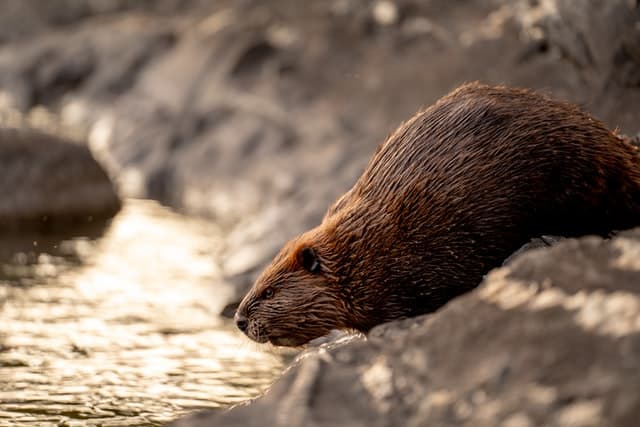 Beavers do have a strong smell but in a good way! For a rodent, beavers are pretty clean and do not have a foul odor. They actually smell good!

Beavers are semi-aquatic animals that love to swim and stay clean. They groom themselves daily with a substance called castoreum which they naturally produce. Surprisingly, this substance smells like musky vanilla!

Unlike humans, beavers do not use soap and shampoo, and they do have a sort of earthy or musky smell but it is not unpleasant. If there were such a thing as a list of nice-smelling animals, beavers would be right on top.

Can you think of other animals that naturally smell good? I know I can’t!

Beavers do not smell bad. They do not stink as most wild animals do.

When you spend half the time in the water, swimming, and building dams, you can’t smell bad. And did I mention that beavers have a built-in perfume in their tails?

Beavers have castor glands that secrete vanilla-smelling goo that keeps them and their homes smelling good.

Beavers smell like vanilla. Vanilla with a touch of earth and water. It is a unique scent that makes them very interesting animals.

Being in the water helps beavers to smell good, because swimming, quite simply, keeps them clean.

Their vegan diet also plays a big factor. Diet affects animal odor, and you’ll often see that herbivores are much less smelly than carnivores and scavengers. With the beaver’s diet of tree bark, grasses, and aquatic plants, their bodies do not emit a foul smell.

While many animals and their territories smell a little like urine and other unpleasant body secretions, beavers smell pleasantly of vanilla.

Beavers are indeed clean animals. They groom each other daily and use an oily substance from their castor glands, which are located at the root of their tails. They rub this substance on their fur to keep it clean and water-proof.

Beavers live in social groups. When they are not gathering food or building dams, they spend a lot of time grooming each other.

These semi-aquatic furballs love to swim too. Being in clean bodies of water a lot keeps them fresh and dirt-free.

Swimming and rubbing themselves with castoreum on their fur is the equivalent of humans taking showers. When you do that daily, there is no way you will stink. Beavers are clean animals.

Yes, as mentioned above, beavers smell like vanilla. They have castor glands under their tails that secrete a yellowish-brown goo-like substance that smells distinctly of vanilla.

Most species in the animal kingdom use unpleasant smells to repulse predators and attract mates. Beavers are one of the very few that use nice fragrances instead.

Come to think of it, I can’t name another animal right now that smells good.

Pleasantly surprising for a rodent. They are fluffy balls of vanilla!

Castoreum is a substance beavers secrete to keep their fur waterproof and clean and to mark their territories.

Castoreum is important for beavers’ survival. They use it for:

Castoreum Is Used For Grooming And Waterproofing The Beaver’s Fur

During grooming, beavers clean each other and rub themselves with castoreum so that water will slide off their fur and they don’t get soaking wet.

Beavers live by ponds and streams and are in the water most of the time. They still need to keep their fur dry, though, so they use castoreum to make it waterproof during their daily grooming.

Beavers Use Castoreum For Attracting Or Seducing New Mates

Beavers use their pleasant fragrance to attract the opposite sex so they can breed. They don’t use strong, foul odors like many mammals do.

That’s what makes them unique.

The vanilla musk plays an important role in their breeding success. They rub castoreum all over their bodies as part of their grooming process, and in turn, this makes them smell pleasantly of vanilla. It’s no surprise that it also helps the beaver attract mates!

Just like humans, beavers make an effort so that their homes and their bodies smell good to attract a partner they can reproduce with.

Beavers Use Castoreum For Marking Their Territories

Beavers use castoreum to mark the boundaries of their territories to let others know the space is occupied.

A good location is hard to find so there will always be competition.

Beavers mark their territories to keep other beaver families away from their dams and ponds, and to warn predators and other animals to stay away.

Is Castoreum Used By People?

Castoreum is used by people commercially in perfumes and cosmetics. It is also marked as a safe food additive by the FDA.

Castoreum As A Food Additive

Although castoreum is rated safe for food consumption, you are not likely to find it in your chocolates and other desserts.

Generally, however, the industry uses another kind of vanilla for that. Most commonly they use synthetic or real vanilla.

If people find out their dessert has something from a beaver’s butt in it, it might be a hard mouthful to swallow!

I wouldn’t mind it though. Talk about “natural flavoring!”

Castoreum Is Used In Perfumes And Cosmetics

Castoreum is extensively used in the commercial sector, especially in beauty products. There are plenty of products that we use daily that are made using this substance.

This is just one of the many reasons the beaver population should be protected.

Do Beavers Mark Their Territory With Smell?

Beavers do, indeed, use their vanilla musk to mark their territories.

First, they construct mounds of dirt to mark the boundaries of their homes. They then mark those mounds with their scent. These mounds are called castor mounds.

When it comes to mating and keeping away unwelcome visitors, the stronger the smell, the better. I wouldn’t mind visiting a vanilla-smelling home, though. Would you?

Beavers spread as much vanilla odor as they can throughout their homes. There is no part of their boundaries that is missed.

Marking territories is hard work. They have to do it over and over to keep the smell strong. It takes time and effort to seduce mates and maintain a home.