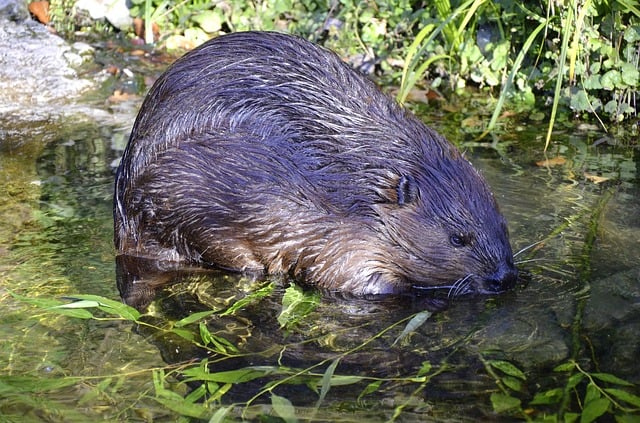 Beavers are naturally communicative animals, using a variety of vocalizations or other noises to communicate with each other, and other animals in their environments. The trick is figuring out what all their noises mean.

Beavers can make a variety of whistling, clicking, or crying sounds to communicate. On occasion, they will also make a loud slapping sound with their tails.

This article explores the sounds beavers make and the meanings behind them.

Do Beavers Use Sound To Communicate?

Beavers have a wide range of vocalizations they can use to communicate, as well as certain nonverbal sounds (Such as clapping their tail).

Most vocalizations are social in nature, requests for food, or invitations for playing and grooming. A few of them are warnings, to or about predators in the area.

What Sounds Do Beavers Make?

Beavers have been recorded making several different noises, including the following:

Meaning of The Sounds Beavers Make

Each sound has a specific meaning, whether it’s ‘I’m hungry’ or ‘let’s play’ or ‘Danger!’. So…which sound is which?

Whines are most often used by younger beavers as a request for food or attention.

Hissing is usually an indicator of distress, and a warning for other animals to leave them alone.

Whistling is an infrequent sound. According to researchers, it’s frequently a defensive sound, used when certain species of beavers are protecting the burrow.

Slapping sounds are a response to unfamiliar stimuli. It can be used to warn predators away, or tell other beavers to move toward deep water for safety.

Grunting, Snorting, Churring, and Barking are all sounds that beavers make to communicate among themselves.

Most of them are thought to be warning sounds or invitations. They can also be signs of contentment or associated with social behaviors such as grooming or playing.

Some of them may even be subconscious, like the noises we make when sleeping.

Beavers are very vocal, but how loud they are, often depends on the reasons they’re making noise.

The loudest noises beavers make are usually a result of fear or distress, made as warnings.

Beavers have been heard hissing in certain situations. Most experts say the hissing is one of two things.

The first reason is that they are warning other animals away from their territory.

The second is that they are frightened and the hissing is a sound of distress.

There are some people who say that beavers can make sounds that are similar to humans screaming or crying.

The sound is most often been associated with younger beavers seeking attention or care from the older members of their group.

Angry beavers make a number of noises. These noises are meant to make other animals leave them alone or to signify an imminent attack.

The most common sounds angry beavers make are hissing, clicking, and growling noises.

Beavers growl when they are angry or feeling aggressive.

Growling is a warning that they are about to attack, especially if it’s followed by taking a standing posture when the animal is on land.

What Does It Mean When Beavers Click or Grind Their Teeth?

Sometimes, a beaver grinding its teeth is just a part of the process of foraging for and chewing its food. Beavers grind their teeth while eating to pulp wood bark and break it down.

Other times, it’s a defense mechanism and a warning. Beavers will click or grind their teeth when they are defending their homes.

Clicking and grinding teeth is meant as a strong ‘Stay Away!’ indicator. If a beaver is making these noises toward you, it’s feeling threatened.

Why Do Beavers Whistle?

Not all beavers whistle. It’s a sound most associated with mountain beavers.

Mountain beavers are reported to be fairly quiet, for beavers, but they will emit a sharp whistle when they’re defending their homes.

They may also squeal, for the same reason.

Do Beavers Have Special Mating Calls?

Generally, beavers don’t actually have specific mating calls. They rely more on scent and visual cues for when they want to mate.

Beavers are generally actively mating in January and February. Physical signs such as swollen mammary and reproductive glands are the signs of being in season.

Baby beavers – called kits – make fewer of some noises and more of others than adult beavers do.

The noises kits make are their ways of attracting attention from their parents or asking for food.

They may also make whining- or other noises when interacting with their siblings. For example, they might grumble as a way of saying ‘That’s Mine’.

Baby beavers – kits – tend to whine. And according to some experts, this sounds remarkably like a human child crying or making noises.

Can Beavers Communicate Through Body Language?

In addition to sounds, beavers have physical signals gestures they use to communicate.

When they sense unusual or unfamiliar stimuli, beavers will swim in circles or float in deep water with their ears and noses out of the water to gather more information.

Affection can often be shown by mutual grooming and gestures.

When a beaver is frightened or trying to warn another animal away from its territory, it will sometimes stand on its hind legs.

This posture means they are getting ready to attack, so you should probably back away if a beaver is taking this stance in your presence.

Why Do Beavers Make Loud Noises By Slapping Their Tails Against The Water?

The loudest noises beavers make are slapping sounds, produced by smacking their large, flat tails against the water. This is a sound usually produced by adults, rather than young beavers.

Slapping the water is a response to an unexpected or unrecognized stimulus. It’s a signal for other beavers of the family to move toward deeper water.

Beavers also make this sound to get more information from whatever is producing the unexpected scents or sounds. Slapping the water is meant to cause a reaction they can understand.

They may also make this noise to warn away predators or other intruders to their territory.

What Prompts A Beaver to Slap Its Tail?

An overwhelming combination of sights, sounds, and scents can result in reaching this threshold and having a beaver sound the alert. The older a beaver is, the more likely it is to investigate and warn others about unexpected stimuli.

It’s also been observed that the older the beaver, the more likely other beavers are to respond to the alert.