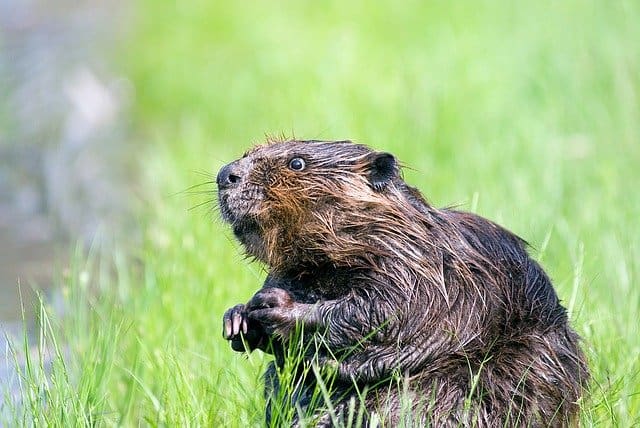 Of all of earth’s amazing creatures, beavers are one of the more curious. They are avid, hard workers that serve a delicate purpose in the ecosystem. Constantly building their dams and diverting water routes to food, one would think they also have excellent eyes and vision.

But, contrary to what some may think, beavers have terrible eyesight. While they can see things that are up close, they can’t see very well at a distance. However, because of a special eyelid, they do have slightly improved vision underwater. To compensate for this ocular handicap, the other senses beavers have are quite acute.

Due to the beaver’s fear of predators, specifically people, they are increasingly becoming more nocturnal or working at night. This is concerning because they already don’t see well; their eyes are better for daytime use. But, in order to adapt to their environment, working at nighttime provides optimal protection.

Unfortunately, beavers have very poor eyesight. They don’t see well at all!

What compounds the issue is that the more mature a beaver gets, the worse its eyesight becomes. In fact, many elderly beavers can contract glaucoma and cataracts, which present their own sets of issues for survival.

While beavers in captivity may receive eye surgery to improve such conditions, ones in the wild become more vulnerable to predators. Plus, you can tell a beaver is suffering from an eye disease by the appearance and build of their lodges, or dams.

No, beavers are not blind but they do have a very hard time seeing objects that are far away. They tend to be fuzzy and out of focus, which leaves them open to attack. Technically speaking, scientists consider beavers near-sighted.

Called myopia, near-sightedness means that light focuses in front of the retina instead of on it. Such a condition translates to blurry objects at a distance but objects closer will appear focused. Unless they are suffering from something like glaucoma or cataracts, then they may as well be blind.

Do Beavers See Better Under Water?

The beaver’s sight does seem to improve slightly underwater. This may be due to magnification from the translucent third eyelid they have when they dive underwater. That said, it’s difficult to study this aspect of beavers so it is still something of a mystery.

However, it’s important to note that they don’t have excellent eyesight underwater like an otter, for instance. It’s just that the objects they see aren’t nearly as blurry at a distance as when they’re on land.

Do Beavers Have See-Through Eyelids?

For the purposes of protecting the eyes underwater, beavers have a nictitating membrane. This is translucent and goes across the eye in a horizontal orientation. Not only does this provide protection, but some studies suggest that it actually helps improve beavers’ eyesight when diving to watery depths.

We don’t know if beavers can see color. There are some theories that suggest they can, but no one has yet been able to prove this. Researchers are still studying beavers’ eyes, so it’s difficult to say with any amount of certainty.

Are There Some Colors Beavers Can’t See?

While researchers have not yet determined whether beavers can see color, nighttime hunters have long known that they cannot see red or infrared. Using a red light is a long-time, well-known technique to render anyone or anything invisible to a beaver.

There is no evidence or proof to suggest that beavers have a difficult time seeing other colors such as orange, yellow or blue. However, some studies are underway that should give a better idea about this within the next few years.

Do Beavers Have Night Vision?

While beavers don’t have night vision, in fact, their vision worsens after dark, they have developed a nocturnal nature. They do not like humans and will develop a nighttime habit if too many people are around. However, in most remote areas, beavers will work during the day.

This is because their nocturnal work is a survival mechanism, not something naturally inherent. But since they don’t see that well, to begin with, they can probably get around fine due to their heightened sense of touch, smell, and hearing.

Do Beavers Blink Their Eyes?

Yes, beavers blink their eyes. In fact, the name of their third eyelid, the nictitating membrane, indicates it by the Latin root word. More specifically, it comes from the Medieval Latin word, nictitatus, derived from the past participle of the verb nictitare, which means “blink, signal with the eyes or wink.”

In order to activate its nictitating membrane, the beaver must blink or wink before going underwater. If they didn’t, it would allow water to enter.

Do Beaver Eyes Glow In The Dark?

Unlike other nocturnal animals, such as wolves, dogs, cats, or coyotes, beavers do not have the same reflective tissue to help them see at night. Therefore, they don’t glow in the dark or have a shine to them when light passes by their face.

This tissue called “tapetum lucidum,” isn’t part of a beaver’s ocular biology because they are diurnal, or daytime active. Even though some beavers are more active at night, they have not yet developed this tissue as a necessary step in their evolution.

What Color Are Beaver Eyes?

All beavers have black, tiny little eyes. They do not vary often; if so, they are slightly brown. Otherwise, you will never see a beaver with green, blue, or hazel eyes – they will always have a very deep hue. Actually, it’s difficult to specifically see the pupil of a beaver’s eye since it melds in with the iris color.

The only time you might be able to see the difference is if you are in bright sunlight and close enough to the beaver to see its eyes.

If Beavers’ Eyes Aren’t Excellent, What Senses Do They Rely On?

Because beavers can’t see very well, they rely on all the other senses they have. While this mostly focuses on scent, they also use hearing to get around every day. So, even though beavers have poor eyesight, other senses are more acute.

For instance, their highly developed cerebellums are what give beavers their 3D coordination. This, in turn, provides a dedicated neocortex to give them a keen sense of touch, smell, and hearing. However, their lips and hands provide a more advanced sense of touch than their tails or whiskers.

Is the Olfactory System Impressive?

Additionally, their sense of smell is quite impressive. They can smell predators several miles away and know the terrain of their immediate environment based on specific scents.

While no one knows for sure, beavers probably also have a heightened sense of taste.

Are their Other Senses Refined?

To illustrate the accuracy of a beaver’s sense of smell, touch, and hearing, they can detect even the most minute sounds from great distances.

Beavers can feel even the slightest change in the pattern of water due to disturbance from a falling branch. So, for what they lack in eyesight they more than makeup for in the other senses.