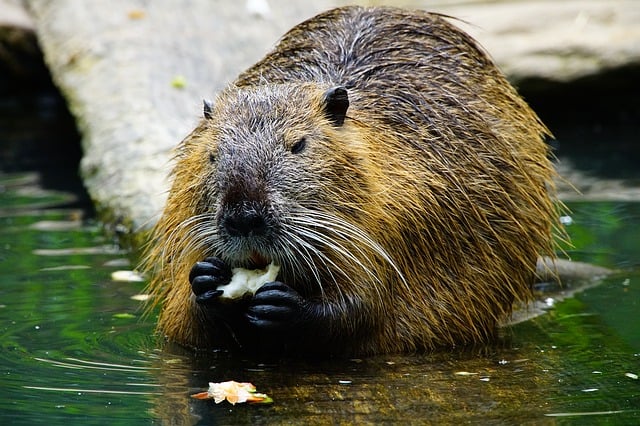 Beavers are known as the symbolic animal of Canada, but these adorable critters can be found in other regions of North and South America, as well as parts of Europe and Asia. Beavers are also incredible swimmers, though they are pretty docile while on land. Beavers are known to be able to create elaborate dams due to resourcefulness and intelligence.

Beavers are very important to our ecosystem despite their reputation for being destructive. A beaver also has a unique diet compared to other rodents. They are also pretty meticulous when it comes to how they source food and store it for safekeeping.

What Do Beavers Eat?

Beavers eat a variety of plant-based foods. They eat plant life that they can extract from trees, as well as various parts of trees, such as branches, bark, and leaves. They also source food from the water, where they live for most of the day, as there are many plants that can be found inside or on top of the water.

Since beavers prefer forested areas that are isolated from human activity, they will also wander the forest when it’s safe in search of other plant sources of food. Depending on where they live, they might be able to find a variety of fruits, vegetables, herbs, and plants.

Are Beavers Herbivores, Omnivores, Or Carnivores?

Beavers are herbivores, meaning that they do not eat any animals or seafood. They are able to sustain themselves by foraging for food.

Beavers prefer the food they get from trees. Trees are a very important part of a beaver’s survival in many ways. Their favorite part of the tree is the fresh bark, branches, and leaves.

In terms of their favorite kind of tree to eat, research would suggest that aspen trees are a beaver’s favorite.

Beavers tend to eat a lot during the day since they are very hard workers building elaborate dams with various structures within them.

At night, they tend to go out looking for food as it’s usually safer to do so. Most of their predators will be sleeping at this time.

They are not technically nocturnal animals; they tend to be more active at dusk or at dawn when they are less likely to have to interact with other animals or humans.

How Often Do Beavers Eat?

Do Beavers Eat Different Things Throughout The Year?

A beaver’s diet will vary throughout the year, as the food they can forage changes as the seasons change. In the Spring, beavers will gravitate towards bark and branches. In the Summer, they might still eat wood, but they will also forage for berries, plants, fruit, and herbs. In winter, at least half of their diet, if not more, will consist of food sourced from trees.

Beavers will store food that they collect throughout the warmer months to sustain them in winter when food sources are a little harder to come by. These piles of food are usually kept in their dens (or “lodges”) in deeper water so other animals can’t steal it.

Do Beavers Chew Their Food?

Technically speaking, beavers don’t chew their food. They do use their teeth to break down the food, however, but more in a “grinding” kind of way.

Their two front teeth constantly grow, so they will chew on wood to wear them down so they don’t get too big. If they do grow too big, they won’t be able to close their mouths. They do have smaller teeth at the back of their mouths that help them grind down their food so they can swallow it.

When eating parts of trees and bark, they will usually take small pieces and nibble on them. Watching a beaver eat a twig or stick of bark is actually quite fascinating. They will rotate the wood while nibbling on it, working from one end to the other.

They do source a lot of their food from nearby trees in their habitat, however. Beavers have very large, strong teeth, so they are able to work their way through strong wood with ease.

They will eat the bark and some twigs from the trees, and use dead parts or the rest of the tree to build their dams.

What Kind Of Wood Do Beavers Eat?

The types of trees that beavers prefer sourcing their food from include willow, poplar wood, and trembling aspen. Additionally, beavers like cottonwood trees, birch trees, and alder trees. These trees contain soft bark underneath their outer bark that beavers tend to really enjoy.

Are There Trees That Beavers Avoid?

Beavers aren’t big fans of spruce or pine trees. They can eat from them and be safe if need be, but they would rather have many other types of trees.

Most of the beaver’s favorite trees lose their leaves in winter, but spruce and pine are evergreen trees, (meaning that they carry leaves or “needles” in the winter, too).

So while these kinds of trees aren’t the beaver’s favorite, they do sometimes nibble on them in wintertime, if no other food-sources are available.

How Quickly Can Beavers Cut Down A Tree?

It’s estimated that beavers can cut down large trees in about five minutes, which is quite marvelous given that they are only using their teeth to do so. However, the size of the tree will determine whether or not it’ll take longer than a few minutes to chew a tree to the point that it tumbles to the ground.

Since beavers aren’t able to climb trees, they had to get creative in order to get their food down. Thus, they use their large teeth to cut down trees to give themselves ample food to chow down on or store.

Can Beavers Move Big Trees Around?

Beavers will usually break up big trees into smaller pieces that are easier for them to drag to their dams.

Beavers do not get splinters when they are pulling apart wood or eating it. Due to how they chew on parts of the tree, they avoid creating splinters that could potentially hurt them. The way their mouths are structured also helps them avoid splinters.

Do Beavers Eat Specific Parts Of The Tree?

Beavers eat a few different parts of a tree. They like to eat the twigs and leaves they can pull off of a tree, as well as the inner and outer bark of a tree. In the summertime, beavers will also go for smaller greenery sources such as shrubs and ferns to eat their leaves and branches.

Do Beavers Eat Anything Other Than Wood?

While beavers prefer to eat bark and other parts of a tree, they do enjoy eating other foods. They tend to eat a lot of plants that they find in the water, as well as berries, herbs, and fruits or vegetables that they can source from the area they live in.

Beavers will eat a lot of vegetation that they are able to source in their habitats. This will also include aquatic plants that they can find in the water or on the surface of the water.

Some examples of plants beavers eat include:

Beavers will even eat grass and leaves from trees!

Beavers will pull out pond lilies and cattails from the water or nearby the water and will munch on the roots and stems of many plants. They provide a lot of really great nutrients to sustain beavers.

Beavers will eat some vegetables if they are able to find them in their living space. One of the most common vegetables a beaver will eat is mushrooms. They will also eat legumes and corn if they can find some.

Since beavers are herbivores, they can and will eat foods that they find growing in the wild or on a farm near their living quarters. If there is a water source near a farm, they might end up wandering into the farm at night when farmers aren’t around to scare them off.

Beavers will sometimes eat nuts and acorns that they find in their habitat, especially during the fall when some of their other food sources are a little harder to find.

They don’t actively seek out nuts as part of their regular diet, but they will eat them when they stumble upon them.

Beavers are not known to eat a variety of fruits, but they do eat apples and berries when they can find them. Furthermore, if they stumble upon other types of fruits through their journeys, they will happily pluck them up and nibble on them.

Just like with vegetables, beavers won’t usually go out searching for fruits and vegetables to eat. They have more than enough options for food in their natural habitats.

For the beaver, fruit can be a nice treat to stumble upon, but it’s not a necessity for beaver survival.

Do Beavers Eat Fish, Crustaceans, And Other Sea Creatures?

Since beavers are herbivores, they won’t eat any fish or crustaceans like clams or crawfish. Because they prefer spending their time in the water as much as possible, they will eat the plant life that they can find in the water.

The only time a beaver might ever indulge in part of a fish is if it was already passed and they were starving, which would almost never happen. Instead, beavers would rather coexist with their fish friends.

Beavers don’t eat reptiles or small animals, as they don’t require any animal sources of food. Since beavers will be able to find more than enough food from plant sources near them, they won’t need to resort to eating any animals or small critters like bugs, lizards, frogs, or rats, for example.

Beavers are not hunters, as their digestive system is not adaptable to eating meat. Beavers probably wouldn’t become sick from eating a little bit of animal protein, however, but it’s really a last resort for a hungry beaver.

The only time beavers would eat anything sourced from animals is as infants when they drink from their mothers.

If a beaver lives near a human’s food source, such as a farm or field, they might potentially grab some of their crops if it’s safe for them to do so. They aren’t really known for being pests in this regard, however.

Beavers are known to be quite scared of humans, so you wouldn’t be able to feed one in the wild. They will most likely run away from you before you can get close. They also might attack you instead of taking food from your hands.

There’s also a good probability that beavers won’t be able to properly digest human foods like cheese or peanut butter.

It’s also not recommended to attempt to feed beavers when you stumble upon them. This can disrupt their ability to forage for food, as they will be under the assumption that they can be fed elsewhere.

Do Beavers Eat Their Own Poop?

It might sound gross, but beavers do eat their own poop sometimes. However, there is more to it than just them being hungry; they are coprophagic, meaning that they produce different types of poop, with one of them actually being good for them.

They produce waste like us, and this is not the type of poop they eat. Instead, they will eat what’s considered their soft feces, which contains food that has either been only partially digested or fermented. There is a different part of a beaver’s colon that produces this soft feces, so they aren’t at risk of eating any of their waste.

This particular type of poop contains a lot of extra nutrients within it that contribute to a beaver’s overall health. Other animals that do this include pigs, rabbits, mice, hamsters, and chinchillas.