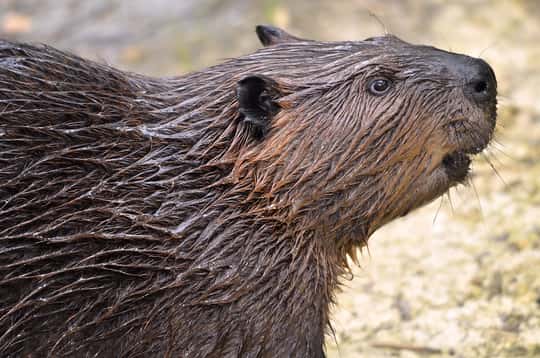 Beavers have an amazing sense of hearing and can hear sounds coming from over a mile away. Their tiny ears can pick up minute noises with great amplification. This is especially true underwater, where sound projects to a precise degree. In fact, when they go underwater, a flap or valve activates to protect the ears from water seeping in.

While a simple, run-of-the-mill rodent, the beaver has rather awesome capabilities; especially when it comes to its hearing. Because beavers have very poor eyesight, this ability is one of the many things to help them compensate for it.

Beavers hear incredibly well. In fact, they have large auditory organs that allow them to hear on both land and in water. They can identify many different sounds with a nuanced and refined auditory ability.

So, even though they may not see a predator, they can definitely hear it long before it approaches. Beavers can even judge the dimensions, orientation, and logistics of their surroundings based on the sound of water.

Can Beavers Hear Sounds From Far Away?

Do Beavers Have Ears?

Yes, beavers have ears, two of them in fact. They’re very small, so it’s difficult to see them, especially if they have a particularly big, bushy coat of fur. At a distance, they look like little nubs on top of their heads. But, the position of the ears high on the head allows them to swim in the water without submerging when necessary.

The ears of a beaver look like tiny skin flaps placed high up on the sides of the head and covered in fur. They’re difficult to locate since they sort of hide amid their thick fur. The small ear size helps keep water from seeping in with the help of a flap.

The entire ear canal measures around 1¼ inches long. At the end of the canal sits a flap that acts as a sort of valve that can the beaver automatically closes off once it dives underwater. This valve helps beavers keep water out of their ears.

How Do Beavers Keep Water Out Of Their Ears?

Because they spend a considerable amount of time underwater, a beaver’s inner ears are sensitive. Therefore, they have a valve of tissue that covers their ear when they go underwater.

The valve simply closes off when beavers dive underwater, so no water can enter the animal’s inner ear. Having its ear valves close doesn’t mean that beavers don’t hear well underwater, however, since beavers’ sense of hearing works slightly differently in water.

This gives the beaver all the protection it needs for the large organs inside its ears.

How Do Beavers Use Their Hearing?

Beavers mostly use their hearing to stay aware of potential predators, notice changes in the water flow patterns, and listen for others in their colony.

They also use their hearing to pay attention to when their young cry in the lodge, or den. As mentioned more below, they also listen for the sound of running water so as to understand how and where to build their dams.

What’s also interesting about a beaver’s audibility is that they feel their way through the water in 3D. Sound is a major component in doing this.

Are Beavers Easily Put Off By Noise?

Loud, high-pitched, and earth-shaking bass sounds bother beavers and it easily puts them off. The curvature of their ears amplifies sound and anything that’s off-putting will force them to hide. They particularly despise the sounds of creatures that bark such as dogs, coyotes, and wolves.

Is It True That Beavers Don’t Like The Sound Of Water?

No, it’s not true that beavers don’t like the sound of water. In fact, many researchers speculate that beavers may actually hear better underwater. This is because of the capacity of water to transmit sound frequencies with accuracy.

However, the sound of water does bother them when close to their lodge. A beaver prides itself on building a quality dam that prevents any amount of water from leaking through. Therefore, they tend to build their homes on still waters. So, they will build themselves a pond for this specific purpose.

In light of this, rangers and foresters have begun doing something pretty clever. They play the sound of loud rushing water to divert beavers from building their lodges in specific places.

Do Beavers Communicate With Each Other Using Sound?

Beavers do communicate with each other using sound. There are various ways they can create this and it’s not just with their mouths. For instance, when danger is approaching, a beaver will send an alarm noise to others in their family or colony by slapping its large, leathery tail on the water.

But they will make other vocalizations such as barks, growls, grumbles, and exasperations. Some people report them having an almost human quality to the sound. They do this to indicate to others that they need help with a tree, to express sorrow, or to display elation, depending on the situation.

Do Mother Beavers Communicate with Their Babies?

Yes, mother beavers communicate with their babies. Actually, most beaver communication occurs between a mother and her young. When babies are cold, hungry, or just want to be near their mothers, they will cry, whine and whimper.

Many people report how these sounds appear just like human babies. In response, the mother will make a gentle cooing or mooing vocalization.

Because babies can begin swimming within a few weeks of coming into the world, they will follow the sound to where she is. Likewise, if the mother knows danger is nearby and hears the babies in distress, she will go to them quickly so as to quiet them and protect them from the potential predator.

When young are happy with their mothers and siblings, they can produce a series of sounds that are clearly happy and positive. However, they are a little difficult to describe. If you do a search on social media video sites, you can find a host of these kinds of recordings, which are super cute and very endearing.