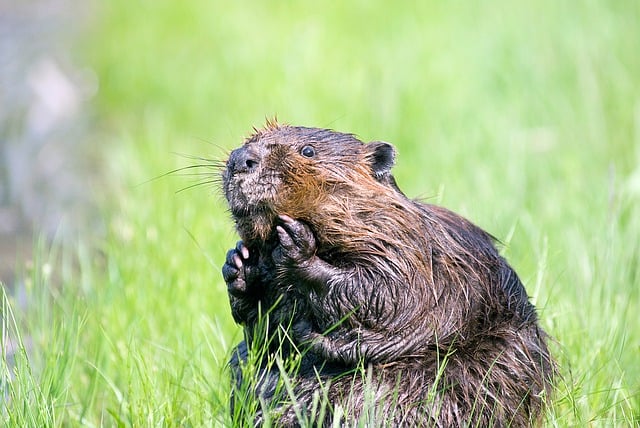 You can find beavers all across the United States and Europe, but you may not know a whole lot about their mating (and dating) life. Beavers form monogamous pairs and they mate for life. Their busy beaver babies are born in the spring and stay at home for 2 years, learning and growing.

Beavers are considered “nature’s engineers”, but are they considered good parents? And do they cheat? This article uncovers the truth about beaver babies, mating, reproduction, and more.

When Is The Beaver’s Mating Season?

The beaver’s mating season is typically during January and February. Sometimes, more rarely, the mating season can last into March. In the Northeast and Western United States, this is during the peak of winter.

Although it is cold during this season, the thick fur of the beaver helps keep them warm. Additionally, beavers store extra body fat during the winter that helps them to insulate. Even their tails get thicker and store fat during winter!

How Do Beavers Choose A Mate?

When the female beaver is ready to mate, she will excrete pheromones on nearby scent mounds in the woods. Male beavers coming into the area will smell them and look for her. Both the male and female beavers will exhibit physical changes that will make them ready to mate.

In general, the best male mate for a female beaver is one that is large and healthy. It is very rare that two males will fight over a female and they usually stay far away from one another because they are territorial. Once a male beaver smells that the single female is ready to mate, he will pursue her.

Do Beavers Mate For Life?

Beavers are one of only a few animal species that actually mate for life. The family unit of beavers consists of a male, a female, and their young (as known as kits). When the kits move out of the den, the parental pair will still stay together.

The “marital” pairing of beavers can last up to 20 years, well into beaver retirement. Only 3% of animals in the world are socially monogamous, and that includes beavers!

Why Are Beavers Monogamous?

Being monogamous is very beneficial to beavers. Since beavers are territorial, staying with the same mate provides them added safety. The entire family unit, including the older kits, are able to defend the territory from other beavers who may want to move into the area.

Beavers are very social and will be rarely found alone. Since they all live together in the same lodge, they all divide the work of building their home. This division of labor is a real family affair!

Do Beavers Cheat On Their Mate?

Beavers will sometimes mate with others who are not in their bonded pair. Both males and females can participate in what is called “extra-pair copulation”, or mating with more than one partner at a time. This is a reproductive strategy of many monogamous species.

Although this sounds like a bad thing, in the animal kingdom, it is actually beneficial for both the male and the female. The goal of any animal, evolutionarily, is to have as many offspring as possible. By mating with other individuals besides the monogamous mate, there are more chances for the parent to pass on their genes.

Even if “cheating” occurs, beavers don’t get divorced. They will stay with their mate and raise their offspring, even if the kit is not biologically theirs.

What Happens If A Beaver Loses Its Mate?

If a beaver loses its mate, it will likely only wait until the next breeding season to find another. Once they have a new mate, they will establish a new home range, have offspring, and be paired for life.

Although beavers do not display emotions in the same way that we do, a type of mourning has been exhibited by beavers after the loss of a mate, an offspring, or a parent. If a mate dies, the partner will wait some time before finding a new mate.

Orphaned newborn beavers cannot survive without their mothers (Unless they have the help of a wildlife rescue: If you suspect that a beaver has lost its family, contact your local wildlife rescue or animal control hotline).

When Do Beavers Know When It’s The Right Time For Mating?

Beavers mate during the winter, during the months of January through February. The male beaver can tell that the female is ready once she begins producing special scents, called excretions.

How Do Beavers Reproduce?

Beavers reproduce underwater. They are excellent swimmers and can hold their breath for over 15 minutes!

The pair will begin to mate by nuzzling one another and participating in mutual grooming. Since they mate during the winter, they may mate under the ice that is covering a pond or creek. Before they begin to reproduce, they will be around two and a half years old.

How Often Do Beavers Reproduce?

Female beavers will have one litter of kits per year. This means that there are usually two litters of offspring in the family lodge at one time. In one litter there can be anywhere from one to eight baby beavers.

How Long Are Beavers Pregnant For?

What Time Of Year Do Beavers Have Babies?

Beavers have babies during the spring. Typically, they are born during the month of May.

Where Do Beavers Give Birth?

Beavers give birth in their lodge. A lodge is a dwelling that the beavers create using mud, sticks, rocks, and tree branches. It is located in the middle of their pond and is surrounded by water. The beaver lodge is warm and dry and provides the colony protection from predators.

Although many people believe that beavers live in their dams, they actually use the dam as a construction tool. Beavers settle in a wetland area and flood the wetland by blocking streams. This creates a pool of water, which turns into a pond and a safe place to build a lodge. This is why beavers are called “Nature’s Engineers”!

How Are Baby Beavers Born?

Baby beavers are born alive and with fur. They will only weigh around 14 ounces. Like all mammals, they nurse (or drink milk) as kits in order to survive. Grasses, wood chips, and leaves are brought into the lodge to create bedding for the young beavers.

At around two to three weeks, the baby beavers will be weaned from the milk and begin to eat vegetation, like their parents. Once they are large enough, they will start to venture outside of the lodge.

No, beavers do not lay eggs. You might be thinking of a platypus, another flat-tailed mammal. Platypus are one of only two mammals in the world that lay eggs.

Beavers are mammals, which means, for the most part, that their babies are born alive, like us. They have warm blood, fur, and drink milk from their mothers.

How Many Babies Do Beavers Have In A Litter?

The size of a beaver litter can vary. The most common number of kits per litter is 4, but there can be as few as 1 and as high as 8.

What Do You Call A Baby Beaver?

A baby beaver is called a kit. For beavers, as well as many other animals, a yearling is an animal that is one year old or in its second year. Since beavers mature at 2 and a half years old, any age after that is considered adulthood.

How Do Beavers Care For Their Babies?

Beaver parents are very involved in the raising of their babies. The mother will nurse them and stay in the lodge with them for most of the day. After around two weeks, the parents will begin to bring their babies small branches and leaves for them to begin to chew on.

Beaver parents do not abandon their babies. Instead, they are very involved in raising them and will oversee everything, from their first swim to their first time felling a tree.

How Long Do Baby Beavers Nurse?

Baby beavers will nurse for around two to three weeks after birth. During this time, they will remain in the safe, warm, and protected lodge with their mother. Once they are able to eat vegetation, they will begin with small pieces of wood twigs, leaves, and shoots.

Their parents will show them foods like cattails, grasses, and mushrooms, as well as the soft inner wood of bark. Adult beavers are specially adapted to be able to eat the inner bark. They use the rest of the trunk of the tree to build their lodges and dams.

How Long Do Baby Beavers Stay With Their Parents?

Beavers stay with their parents for around two years. During this time the parents will have had another litter of kits, meaning the family unit of beavers, or colony consists of one male and female mated pair, one litter of yearlings, and one litter of newborns.

When the baby beavers are ready to leave their parents, they usually do not go too far. They will often settle nearby and claim territory downstream from their parents.

Beavers are great parents. For the first few weeks of their life, beaver kits stay in the lodge with their mother. They are groomed, nursed, nuzzled, and coddled. Once they grow a bit larger, they remain within eyesight of their parents at all times and begin to mimic the actions of the adults.

Beavers have been spotted giving their young piggyback rides and teaching them how to dive.

In addition to being good parents, beavers are good siblings. The older yearlings will take care of the younger newborns and show them the ropes. The young must very quickly learn all the busy beaver behaviors, like felling trees, swimming, and building lodges and dams.

How Involved Is The Dad Beaver In Raising His Young?

Although male beavers cannot nurse the babies, they are very active in raising their young. It has been noted that if the mother beaver dies, the father will take over and remain with the colony.

Generally, the male will build and maintain the lodge and dam, including any repairs like filling in leaks with mud. He will also gather food and act as a defender of the territory.

How Independent Are Baby Beavers?

Beavers are very independent at birth. For the most part, they are born ready for action, but they need to nurse for two weeks. Additionally, they remain in the lodge for a full week, even though they can begin to swim at just four days old. By six weeks old, they can be fully weaned and begin to forage for food themselves.

Even though they may be able to physically survive on their own, they stay with the family group, or colony, for around two years. This allows them ample time to learn vital social behaviors like dam building.