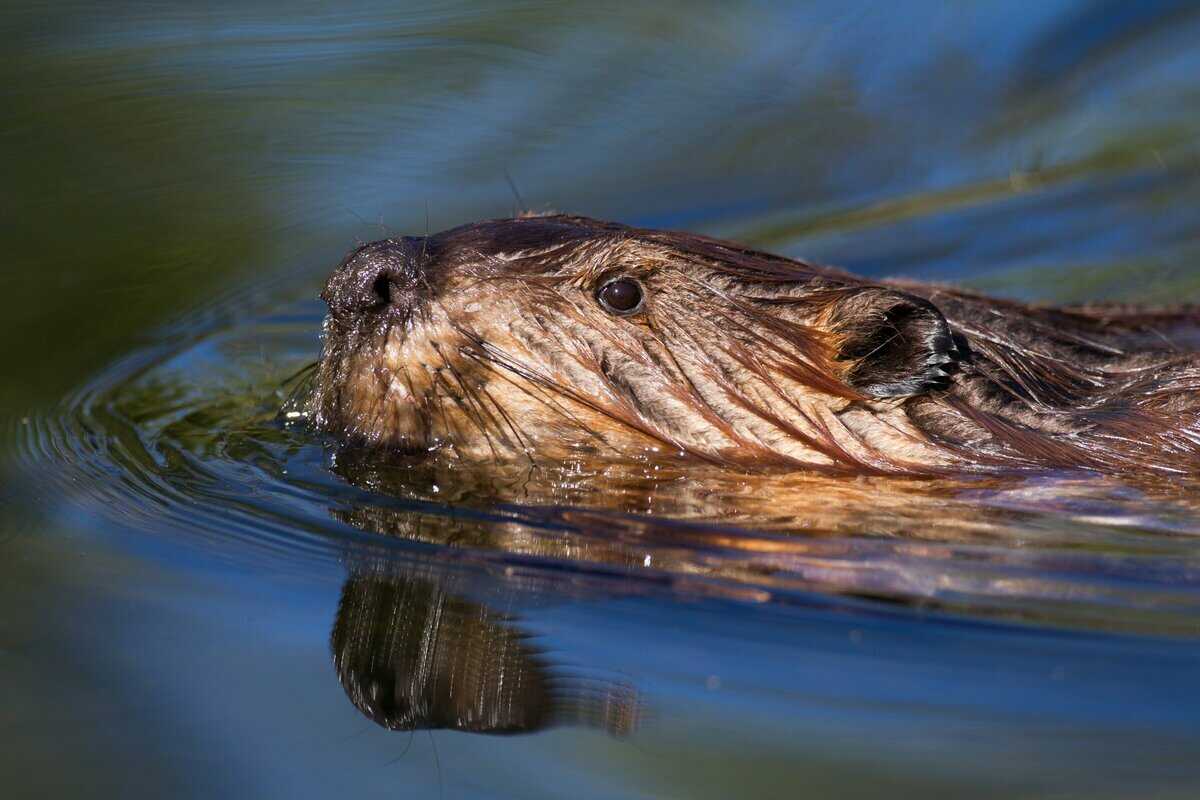 One of North America’s most iconic mammals, the North American beaver (a slightly different species than the Eurasian beaver) is famously a semi-aquatic large rodent that spends a significant amount of its time in and around the water. These beautiful animals have a close and fascinating relationship with the waterways that they call home.

The lives of beavers are inextricably linked with the water as they depend upon it for housing, obtaining food, protection, and much more. To make the most of their environment, the bodies of these wonderful creatures are highly adapted to a water-based lifestyle in a number of very interesting ways.

This article will go into detail about the swimming, bathing, and grooming habits of beavers to answer any and all questions you might have about how these mammals interact with the waters in which they live, and how they have evolved to become an integral part of America’s freshwater ecosystems.

Beavers are fantastic swimmers, though you might not think it to look at them. If you’ve ever seen a beaver walking around on land you’ve probably noticed how awkward and clumsy they seem to be.

They have stout little bodies and large, scaly tails which flop behind them as they waddle about. When they get into the water, however, they suddenly become surprisingly elegant and graceful.

In many ways, the beaver’s body is more suited to swimming than it is to walking on land. They are still mammals, which means that they have lungs with which they breathe and need to spend the majority of their time above the surface, but they have many different adaptations which make them excellent swimmers.

How Are Beavers’ Bodies Adapted for Swimming?

Some of the different ways that beavers’ bodies have adapted to make them better swimmers include:

In fact, almost everything about a beaver’s body seems perfectly designed for a life spent navigating the waterways of North America, so it is no surprise that they are such fantastic swimmers.

They are so naturally prepared for the water, in fact, that beaver babies (known as kits) can actually start swimming just 24 hours after they have been born!

How Do Beavers Swim?

When they get into the water, beavers become little swimming machines. They propel themselves along by kicking with their larger, webbed hind feet which act as flippers. Their smaller front paws are more hand-like, designed for manipulating objects rather than for swimming, so they hold them close to their chests and out of the way.

Though their large tails may look like oars, they actually act more like a rudder, helping to steer them in the right direction while they swim. When they are under the water, beavers usually swim at speeds of around 2 mph (3.2km/h) but they can go as fast as 6mph (10 km/h).

While they do usually spend a lot of their days in the water, beavers generally stick to their own territories. Beavers’ territories generally run along a shore or a riverbank and they can be as small as 0.5km and as large as 20km.

How Are Beavers Adapted for Being Underwater?

When they are swimming, beavers will spend a lot of time at the surface, with the top of their heads poking out so that they can see and breathe easily. They do also dive below the surface as well, and they are very adept at swimming underwater.

As mammals, beavers can’t actually breathe underwater, but they stay submerged for so long that it almost seems like they can.

Due to the large size of their lungs and their ability to tightly close their ears and noses, beavers can hold their breath underwater for up to 15 minutes. They also have specialized, large livers that store extra oxidized blood, and a slow circulatory system so that they don’t need to replenish their oxygen supply as often as most mammals do.

The amazing clear eyelids that beavers possess act like swimming goggles so that they can see surprisingly clearly when they are underwater. This allows them to navigate their native waterways with ease, even when they are beneath the surface.

Can a Beaver Breathe Under Water?

Beavers are very much aquatic creatures; they need water to survive. That is why they live and work around freshwater lakes, rivers, and swamps. They are not fish and they don’t have gills, so they can’t breathe underwater like a fish. However, they can hold their breath well enough to stay underwater for up to 15 minutes at a time.

The natural habitats of North American beavers are relatively slow-moving sources of freshwater. They live in ponds, lakes, rivers, and streams all across North America, apart from in areas that are too hot and dry, like the deserts of the Southwestern United States.

So that they can swim without difficulty and build effective dams, beavers prefer water that doesn’t move too quickly and as such, they like a gradient of around 1-2%. This is so that they don’t have to fight against too strong of a current when they are in the water and the dams that they build are less likely to be damaged or washed away.

Do Beavers Sleep and Live in The Water?

Although they spend a large portion of their lives actually in the water, they need to sleep above the surface so that they can breathe freely and remain warm throughout the night. The famous dams that beavers construct provide them with an area of still, deep water where they can feed, but they also incorporate lodges in which the beavers can sleep.

Beaver lodges usually have at least two water-filled tunnels which act as underwater entrances, so they are protected from potential predators. The interior chambers of a beaver’s lodge are small pockets inside that are actually above the surface of the water. Safe and warm, beavers can rest and sleep in the dry while still remaining surrounded by freshwater.

Beavers build their dams and lodges by felling trees with their huge teeth and cutting them into smaller branches that they can then drag into place. They also use mud to stick the branches together and provide a layer of insulation.

A chamber inside of a beaver lodge acts as more than just a bedroom, it is also living quarters, a grooming space, and a nursery for the whole family. Beavers live in colonies of between 2 and 8 individuals who are all related. Younger siblings will generally stay with their parents for around 2 years before setting off to form a colony of their own.

Although they are incredible swimmers that live much of their lives in or under the water, beavers are still mammals at the end of the day. If they get trapped beneath the surface and are unable to come up for air, it is possible for a beaver to drown.

Although they do have waterproof fur and large, flat feet and tails, beavers are still quite heavy animals, so they need to expend a bit of energy in order to stay afloat. When they are in the water, beavers are generally on the move, so you won’t see them floating around on their backs as sea otters do.

Can You Swim with Beavers?

You can swim around beavers as long as you stay at a safe distance and avoid ingesting any of the water that they live in. If you leave them alone, beavers are not dangerous animals, and they will very rarely go out of their way to attack a human.

Beavers will, however, defend themselves if they feel trapped or cornered. When they are feeling vulnerable, they will often send a warning by growling or hissing and might stand up on their hind legs to appear bigger.

If you are keeping your distance, a beaver is very unlikely to attack you, but their sharp teeth can cause serious injury if they do feel threatened.

A more significant risk when swimming near beavers is swallowing contaminated water. You should be very careful to not ingest any water that mammals may have relieved themselves in because it could contain waterborne diseases and parasites.

Do Beavers Bathe or Wash Themselves in Water?

All of that time in the water might seem like bathing by itself, but beavers actually go out of their way to give themselves a good scrub on a regular basis. They can often be seen grooming themselves or each other by dipping their front feet into the water and rubbing themselves down.

This grooming doesn’t just get rid of unwanted dirt, it actually makes sure that their fur remains waterproof by keeping it covered in a layer of oily “castor” that they produce from glands on the underside of their abdomen.

Usually, beavers will sit upright in order to groom and tuck their tails between their legs. Then, they will rub their little paws over their bodies, reaching as many areas as they can. To distribute the castor evenly, they have a special “split nail” on the second toe of each of their front feet which acts almost like a small comb.