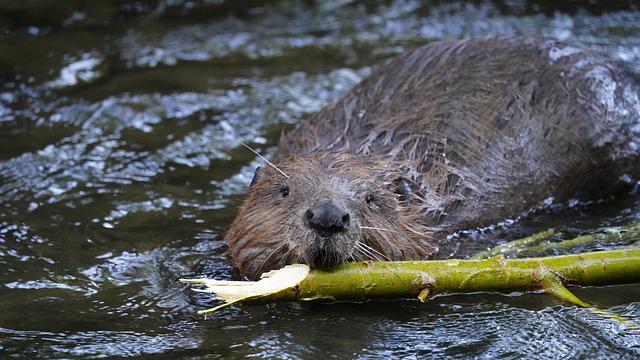 Beavers are fascinating animals. Aside from being cute and cuddly, they are highly intelligent. They can perform amazing feats like dam building to create a home for themselves. But just as they are smart enough to build a home, they are also smart enough to protect it.

Beavers are highly territorial, and the last thing you want to do when you see a beaver is to let it think you’re a threat.

How Do Beavers First Establish Their Territory?

Once beavers find a place they like, they will establish it as their territory by making it more habitable. Aside from humans, beavers are among the only animals to change the environment they live in to suit their needs.

We often associate beavers with dam building, and that’s one way they change the environment to suit their own needs. A colony needs food and shelter, which a dam provides, to survive. A dam also creates a pond of stagnant water where beavers can build lodges. These lodges serve as their home.

If they can’t create a lodge, beavers are also known to dig burrows around river banks. Around this new area, beavers will create dirt mounds as a border for their territory.

How Big Is A Beaver Territory?

The territory the beaver claims can range from 1-15 miles in length. For a single beaver-family, that is a reasonable amount of space, even larger than many of our houses. This is because beavers need many resources to survive, such as food.

This means that food availability will affect how big a beaver’s territory needs to be. If food is less plentiful in an area, beavers might need to claim more land in order to have enough food available.

On the other hand, the number of beavers in a given area can also affect beaver territory sizes. If plenty of beavers already live in the area, a colony won’t have the opportunity to lay their little paws on much land.

Although cute and cuddly, beavers are highly territorial mammals and can become aggressive if they feel their territory is threatened. Beavers will do everything to defend their territory area and will not leave unless they’re forced to.

Once they find a place to settle, they will make it their own, establishing a lodge and one or several dams. With all that work, you can be sure they won’t just let anyone near it.

Do Beavers Fight For Territory?

The leading cause for beaver attacks is self-defense because they feel their territory is threatened. If a stray beaver wanders into an existing colony’s territory, the local beavers will do everything to drive them away.

These attacks are not limited to just fellow beavers either. Beavers are willing to fight other animals and even humans to protect their territory.

How Do Beavers Defend Their Territories?

Although not ordinarily aggressive, when defending their homes, beavers can be vicious.

At first, they will try to chase intruders to scare them off. If that doesn’t work, they can make use of their teeth and claws. Although their claws are used mainly for digging, they can be used for self-defense, and their teeth are very sharp!

Beavers can use their claws to scratch anyone who gets too close to their homes. The same is true with their strong teeth. Their teeth are made for cutting down wood, so they should have no problem seriously injuring people and animals.

Are Beavers Aggressive Towards Humans?

Generally speaking, beavers will avoid contact with humans whenever possible. However, if they feel threatened or if you are too close to their territory, they can become aggressive.

Don’t let their small size fool you; beavers will protect their homes just like any of us. There have been 11 reported beaver attacks in the last ten years, one being fatal.

If you ever find a beaver, keep your distance, especially if it’s near its home, because it might consider you an intruder and attack you!

Do Beavers Mind Other Animals In Their Territory?

It depends on the animal and whether or not beavers see them as a threat to their territory. There are some animals that beavers don’t mind around their territory, like birds, turtles, and frogs. That is because these animals are small and don’t pose any threat to the beaver, their family, or their habitat.

On the other hand, you won’t see animals like other beavers or large rodents come too close to a beaver dam or lodge because beavers might see them as a threat and make efforts to chase them away. Even humans won’t be a welcome sight to a territorial beaver.

It’s like how many of us don’t mind birds or butterflies near our home, but we might take issue with rats or cockroaches.

Do Beavers Mark Their Territory?

One way beavers protect their territory is by marking it with their scent. They will use various means to mark their territory and let other animals know who owns this land.

One theory called the scent-fence hypothesis theorizes that beavers rub their scent along the territory’s borders to let everyone know who owns this part, acting as a fence. Another theory is the scent-matching hypothesis: Beavers leave their mark to warn potential rivals that they are nearby.

The main reason beavers and other animals do this is to send a message. When they do their business in an area, it says, “Hey, I’m here, so you better stay away.”

Beavers Mark Their Territories With Scented Mounds Of Dirt

Beavers mark their territory by creating small mounds with dirt and infusing them with their scent. These mounds are made from mud, debris, and wood and vary in height depending on location and available resources. Regardless of how they look, the purpose is clear.

Marking the dirt mounds with castorium is a physical and pheromonal marker. Beavers can create several mounds around their territory to mark their territories. Meanwhile, the scent warns potential rivals, but interestingly enough, it’s also used by the beaver to attract mates!

So if you see a few mounds around a pond, you should know you’re most likely entering beaver country!

How Do Beavers Leave Their Scent?

Castorium is liquid and appears similar to urine when they secrete it. Its robust, musk-like quality allows other animals to smell it easily. Interestingly, castorium is known for smelling similarly to vanilla!

How Many Beavers Live In A Territory?

A beaver colony can vary in size but consists of a single-family unit. Typically, beaver colonies number six individuals on average but can consist of as many as eight or as low as two beavers. You won’t see colonies get any bigger than this because most offspring leave once they reach adulthood.

The average beaver colony will consist of the parents and the current and last year’s offspring. If the beavers are particularly active, they can also have a couple of six-month-old offspring.

Juvenile beavers older than that are rare to see in their parent’s colony and will generally leave the lodge to start their own colonies after a while.

When do Do Juvenile Beavers need To Leave Their Parents’ Territory?

Like many animals, younger beavers must leave the nest once the time is right. Usually, juvenile beavers will leave their parent’s colony after two years. By this point, young beavers are sexually and physically mature and can care for themselves and find a mate.

However, they will need to establish their own territory where they can support their mate and offspring. So young beavers will venture out and find new places to raise their family.

Do Beavers Ever Venture Out Of Their Territory?

Once a beaver settles in its territory, it certainly isn’t going to abandon it. However, there are some situations where a beaver will leave its territory.

The most common reason is food. If a beaver colony eats all the available food in the area, male beavers might forage for food outside their area. On the other hand, female beavers rarely leave their territory because they’re occupied with raising their young and protecting them from predators and intruders.

The most likely to leave the territory, though, are the offspring. Once they reach sexual maturity, most beavers will leave the lodge and look to establish their own territory. Their search can take a long time, and they can end up miles away from the original colony.