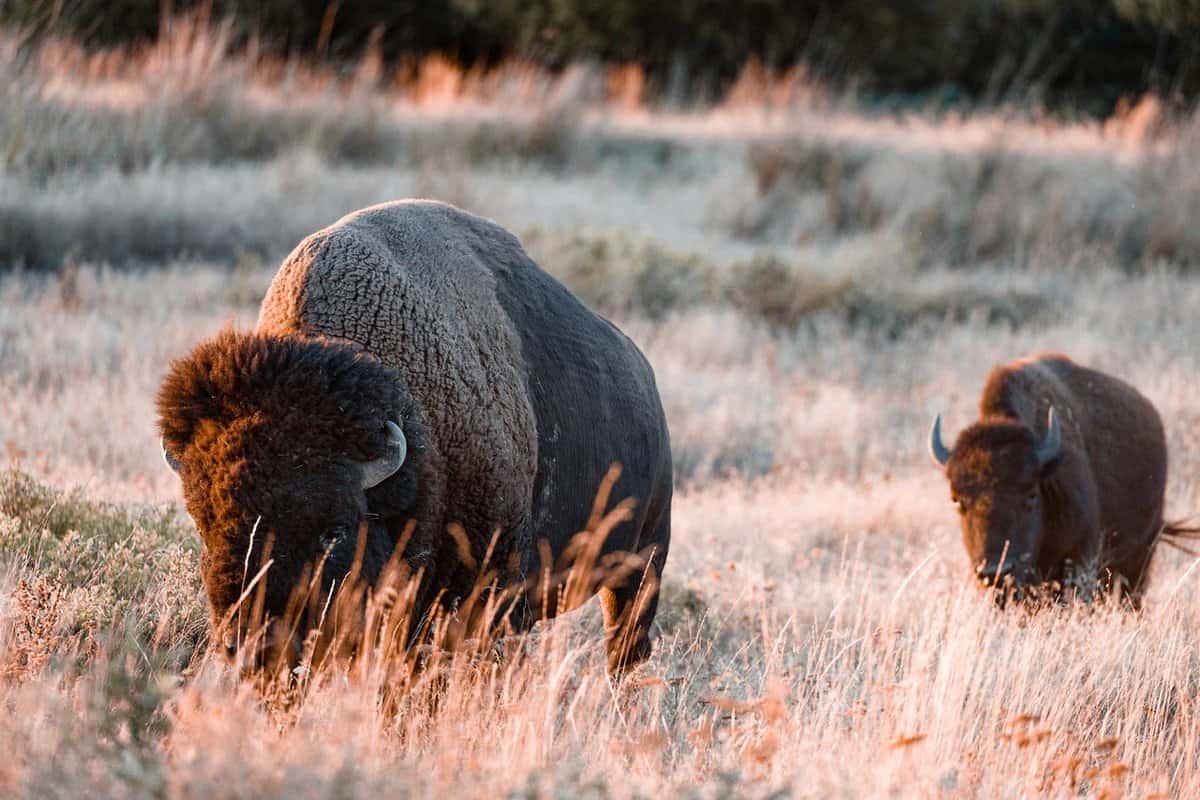 Did you know that ancient American tribes used to believe that thunders are associated with a herd of bison running on the prairies?

Because of a bison’s huge size of 930 to 2,200 pounds and height of 7 to 11.5 feet, we can’t blame these tribes for thinking that the sound of thunder originated from a bison herd running – especially with a bison’s running speed of around 40 miles per hour.

Now, speaking of running, do you want to know more about these so-called lords of the prairies? Continue scrolling as I discuss everything you need to learn about bison and their running behavior!

How Fast Can A Bison Run?

According to National Geographic, a bison can run up to 40 miles per hour. In addition, since bison are considered the largest mammal in North America, that means that they have both powerful speed and size.

Fortunately, bison’s neighboring wild animals shouldn’t worry about being chased at 40 miles per hour since bison are herbivores. Thus, they only consume herbaceous grasses and sedges.

Moreover, aside from using their sharp and curved horns extending from the sides of their heads against predators, bison’s primary defense also includes their astonishing speed.

Why Do Bison Run?

Bison run because of many factors such as migrating, attacking, and defending themselves against predators. When migrating as herds, bison stampedes are common. This refers to a herd of bison running in the same direction after being frightened or excited.

Meanwhile, a bison also sprints to its target when charging. And lastly, bison run to escape from their predators or dangerous situations.

Check this video of a bison stampede in Yellowstone National Park:

Do Bison Really Run Towards Storms?

Bison don’t actually run towards storms. Instead, they travel face first into the storm, if they’re going in that direction. Unlike other wild animals, bison have a thicker coat on the front (head, shoulders, and front legs). So, when there are blizzards, strong winds, or storms, they face it with the more wooly parts of their body.

How Do Bison Run?

Since bison prefer to live and travel in groups, you can also spot them running in herds and in one direction (usually towards the direction where they are migrating to). In addition, when bison run, their long tongues roll in and out – providing them with an incredible amount of air.

Do Bison Keep Running Fast, Or Do They Run In Sprints?

Depending on the situation, bison can sometimes keep running fast or sprint. A bison typically continuously runs fast when escaping from a predator, or simply migrating. Meanwhile, they run in sprints to move towards their target when charging or attacking.

The difference between running and sprinting is the latter is more powerful and faster but can only be done in short bursts.

How Long Can Bison Keep Running?

Since bison are extremely agile, they can run 35 to 40 miles per hour for around 4-5 hours straight! In addition, after running for a long time, you won’t notice any tiredness in their physique, and their breathing goes back to normal easily.

How Far Do Bison Move Every Day?

As mentioned in the San Diego Zoo Wildlife Alliance Library, bison herds often travel for around 2 miles per day.

This is nothing, however, compared to the bison’s yearly migration between their summer and winter ranges, bison can travel as long as 150 miles in a single day.

With this, bison travel far more compared to other ungulates in the Greater Yellowstone Ecosystem.

There are also some cases where a bison herd remains in one area for days. Their travel movements vary depending on the availability of water, the quality of plants, and the presence of biting insects.

Why Bison Are So Good At Running

A bison’s heart and windpipe are larger than other animals such as ordinary milking cows. This characteristic allows them to run for a long amount of time without getting tired easily.

Furthermore, the small rump on their back gives them the ability to turn around quickly – which is beneficial in defending themselves against predators and running fast. Bison can also horizontally jump for more than 7 feet. Their jumping skills give them a good running head start!

Are Bison Faster Than…

Given that bison also have incredible speed, how fast are they compared to other animals? Especially to their common predators such as grizzly bears and wolves. Are they faster, slower, or the same?

Horses have a maximum speed of around 35 miles per hour. With this, a bison and a horse can run at the same speed or faster than one another.

Despite not being known for their speed, wolves can run up to 36 to 38 miles per hour. It means that they have almost similar speeds to a bison, but wolves definitely will not be able to keep up with the bison’s top speed for long.

Compared to horses and wolves, coyotes have higher chances of outrunning a bison with a maximum speed of 43 miles per hour.

The North American brown bears or grizzly bears, like horses and wolves, can run up to 35 miles per hour – this means that their speed is not that far from a bison’s.

Can A Person Outrun A Bison?

Now, moving forward to one of the most awaited questions, can a person outrun a bison? Well, the basic answer is no. A person can’t outrun a bison.

What To Do If A Bison Chases You?

Since running away from a bison may not be your top choice when they are chasing or attacking you, you need to have other options.

Rob Nelson, a biologist, and wildlife educator mention the following ways you can survive a bison attack:

First, instead of running away, back away slowly from the bison. Running can do more harm than good in your situation. Moreover, shouting can also make them more aggressive.

Secondly, find a barrier between you and the bison. The barrier can be a vehicle, a boulder, and even a huge bush or group of trees. This will help you if they try to charge you with their horns.

Lastly, try to climb on trees or any high infrastructures. Since bison can’t climb trees, you will be safer on them.

How To Prevent Bison Attacks

Bison attacks are not uncommon. According to the Washington Post, there have been 25 injuries related to bison attacks between 2000 and 2015. Thus, here are the following ways how you can prevent bison attacks:

First, keep your distance. Maintain a distance of at least 25 yards away. A bison can get pretty aggressive once you invade its personal space.

Secondly, be aware of the bison’s body cues. If a bison looks in your direction or makes eye contact, that’s one of the signs that it’s getting irritated. Bison usually don’t pay attention to humans at all. Also, if a bison raises its tail, it’s a clear sign that they’re planning to charge.

Thirdly, be extra careful during summertime. Male bison are more aggressive during summer because it is their mating season. So, their testosterone level is higher than usual.

And lastly, this one’s self-explanatory,  never try to feed or take a selfie with a bison.