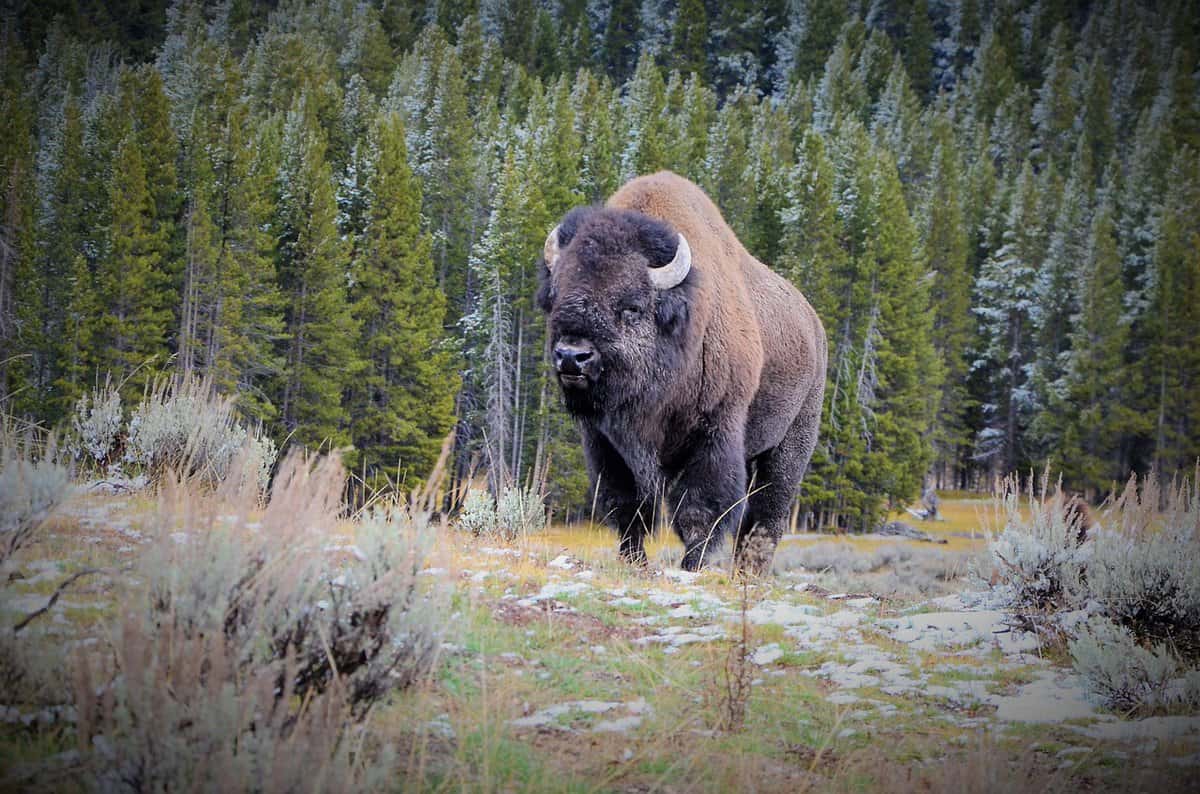 The bison: big, fast, strong, floofy – and often called by the wrong name.

Why are bison referred to as “American buffalo,” where did they come from, and who are their cousins? Floofmania gives you the 411 on everything you need to know about the American bison.

What Kind Of Animal Is A Bison?

Bison are part of the Bovidae family of cloven-hoofed mammals, including cattle, sheep, antelope, and bison. It is one of the largest species within this family.

Bison have long, shaggy brown fur that covers their entire bodies and have beards under their chins. They have big heads with short black horns and a distinct hump on their shoulders.

The American bison is found only in North America, almost exclusively within national parks and wildlife reserves, where its population size is constantly monitored and protected.

The American bison’s scientific name may be one of the easiest to remember in the animal kingdom: Bison bison. Its European cousin is known as the Bison bonasus.

While bison have their genus, tests have shown that they are genetically very close to the genus Bos, which includes cattle (ox, cows, bulls) and yaks.

Are There Subspecies of Bison?

Are Bison Herbivores, Omnivores, or Carnivores?

Despite their size, bison are herbivores! They enjoy low-growing grasses and weeds.

Unlike their cousins, the cow, who likes to consume an entire area before moving on to their next plot of grass, bison are constantly on the move. They graze lightly in an area and then quickly move on. Sometimes they even eat while walking. Bison can cover an area of up to 23,0000 hectares to satiate their hunger and desire to munch.

What Animals Are Bison The Closest Related To?

Of all the animals in the Bovidae family, bison are closest to yaks.

However, they are generally exceptionally genetically similar to all bovids. Cattle (collective term for cows, bulls, and oxen) are sometimes jokingly referred to as “domesticated bison.”

What Did The Bison Evolve From?

Bison (Bison bison) and cattle (Bos taurus) both evolved from the Leptobos, an animal that lived during the Pliocene era (2.5-5 million years ago). Early bison looked very similar to cattle, including horns that pointed forward and no hump.

Bison, as we know them, first appeared in Asia about 2.5 million years ago (Pleistocene era). They somehow made their way to North America about 195,000 to 135,000 years ago.

Once there, several subspecies quickly evolved, including:

Are Bison and Buffalo The Same Animal?

Despite being scientifically named Bison bison bison, many people still refer to bison as “buffalo“!

Though both are from the Bovidae family, they are different animals that are not closely related. They also live on entirely different continents: Bison are found in North America and Europe, while buffalo live in Asia and Africa.

Why Do People Sometimes Call The Bison “Buffalo”?

Why the mix-up in names?

One theory points to the French explorers in the 1600s. In their travels across North America, they came across a bison and called it a “bœuf.” But they were only referring to another “bœuf” – that is, buffalo living in Africa and Asia.

Another theory involves the English. Also, during the 1600s, English military men wore a protective jacket called a “buff” coat. When they arrived in North America, they described all animals with thick, furry, leathery skin as “buff.” Of all the animals they referred to with that moniker, it was the bison that ended up keeping it.

Some theories are a mix of the two.

Whatever the real origin of the story is, until today, many still refer to the bison as the “American buffalo.”

What’s The Difference Between A Bison, A Cow, and A Buffalo?

The short answer is that they are three different animals! You can tell them apart based on their body shape, size, horns, hair, location, and speed. Here is a quick guide for all three:

Click here to read more about bison vs cows!

They can! The most predominant crossbreed produced today is the beefalo or a bison/cattle mix.

While researchers noticed the first accidental hybrid way back in 1749, intentional, scientifically-backed breeding didn’t begin until the mid-19th century. Scientists created the breed to combine the best characteristics of both animals to produce a “superior” type of beef.

Other bovine cross breeds include:

Keystone species are animals that hold together an ecosystem. They can be animals, plants, or even microorganisms.

Bison are a keystone species of the plains because of their tremendous impact on the environment and animals around them.

How Do Bison Contribute To The Ecosystem?

After a bison passes through a grazing area, the grass is left at varying heights creating a perfect habitat for nesting birds. As the bison roll and stomp around the area, they make holes in the ground known as wallows. These wallows fill with water after rain showers and morph into breeding pools for amphibians and drinking troughs for wildlife who live in the area.

And as we know, bison like to walk – acres and acres of plains get the “bison treatment,” benefiting dozens if not hundreds of other animals in the ecosystem.

Did Bison Use To Be More Widespread?

Until the late 18th century, over 60 million bison freely roamed North America. Unfortunately, only about a hundred years later, their numbers were down to 541. European settlers hunted bison almost to extinction for their meat and fur, and the species was also greatly affected by the destruction of their natural habitats.

Today, there are about 500,000 bison because of conservation efforts, and they are no longer considered endangered. They are, however, “ecologically extinct.” This means they are no longer found roaming freely in the wild but can only live in national parks and other wildlife reserves. Also, only 2 of the six bison subspecies remain.