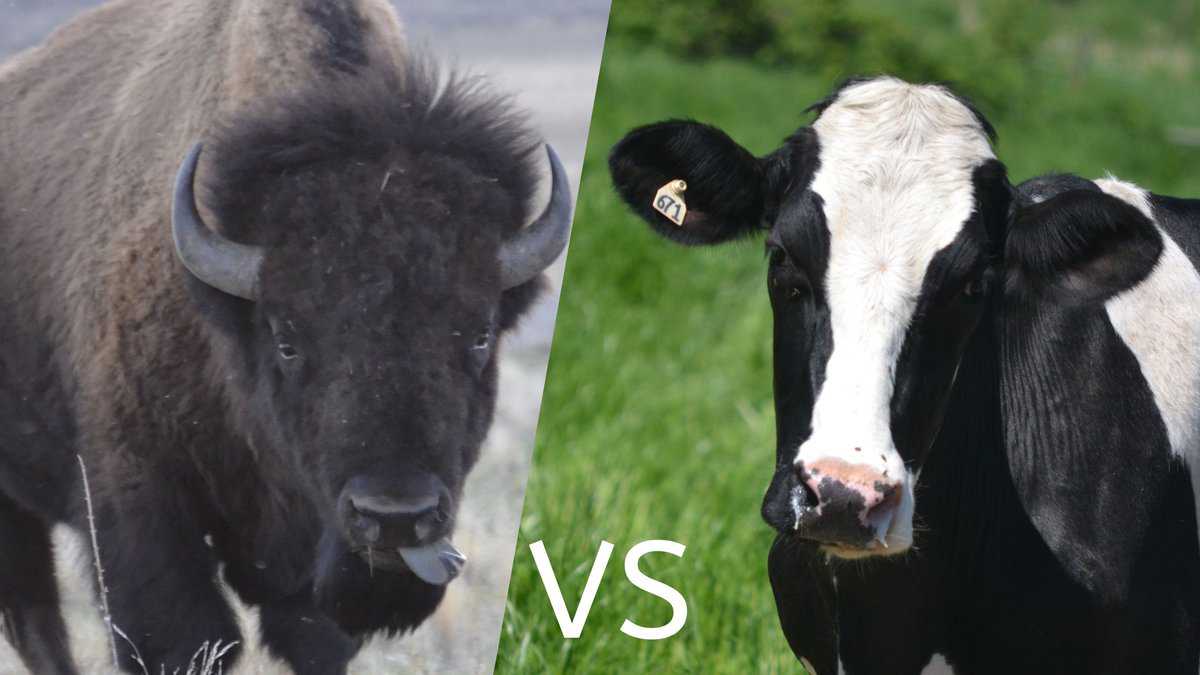 There are a wide variety of cows, but only two living species of bison: the American bison and the European bison. While some kinds of cows are obviously not bison, others can cause you to stop and wonder for a minute.

Floofmania gets into each of these features below to help you determine which animal you see the next time you come across either or maybe even both!

Are Bison And Cows Related?

But first, let’s address the question: why do they look so similar in the first place?

Bison and cows are often confused with each other because they are related! Both animals come from the Bovidae family, along with sheep, buffalo, antelopes, and other cloven-hoofed animals. For centuries, they have provided humans with meat, dairy, leather, and wool.

What’s The Difference Between A Bison And A Cow?

For starters, bison can be both male and female while cows are only female – male “cows” are called bulls, while the word cattle refers to cows of both genders.

Thankfully, there are many other visual differences you can easily spot from a distance.

What’s the Difference Between Bison and Cow Body Shape?

We’re all generally familiar with what cows look like: they have large heads, distinct necks higher than their back, and a wide midsection from calving.

Bison have huge, furry heads, usually with beards, for both males and females. Their necks are not as observable as cows’ because of their musculature. But the most prominent distinguishing feature is the bison’s big, unique hump on its back, which is higher than the animal’s head.

Which Is Bigger: Bison Or Cows?

Bison are much bigger than cows, sometimes even twice as large!

(As a clarification, the specified weights above are not for cows raised on farms for their meat – those are usually unnaturally bigger than average!)

How Are Bison’s and Cows’ Horns Different?

Both male and female bison have small, black horns that curve upwards. These can grow up to 2 feet long, and bison are not afraid to use them when they fight each other!

Some cow species have horns that begin to grow at about two months of age, while others naturally don’t have horns. Certain cow species, particularly dairy cows, are either specifically bred without horns or have their horns cut off, typically when they are young. The “no horns” policy keeps dairy farmers and other visitors safe when handling the cows and saves space in the barn!

For the cows that do grow horns, however, they are usually less prominent than those of bison. They are small and might point upright or curve forward slightly, depending on the species. There are exceptions, however like the “Highland Cattle” and the “Longhorn” breeds of cattle, which both have impressive, long horns.

What’s With The Hair – of Bison and Cows?

Across the board, all bison have long, shaggy, brown hair covering their bodies.

Cows come in many colors, including white, black, brown, tan, and various combinations. Usually, they have short hair, but some species, such as the Highland Cattle, have hair similar to bison that keeps them warm in the winter. In the summer, the Highland Cattle shed this extra layer off and look like “regular” cows again.

Can You Tell Bison And Cows Apart From Their Tails?

Tails are used by most animals for communication and also to swat flies away.

A cow’s tail is made up of vertebrae and is an extension of its spine. It contains almost 10% of all the cow’s bones in its body!

Cows’ tails are usually between 7-8 inches long, while bison’s tails are between 11.8-35.8 inches. Their tail lengths are more or less proportional to their overall body sizes. Both also end in fringed tufts.

Overall, it would be difficult to tell the animals apart solely by looking at their tails.

Do Bison And Cows Move Differently?

In the wild, cows tend to hang out near bodies of water and trees more than bison do.

They also have differing grazing preferences: cows (cattle) tend to stay in one area and completely use it up before moving on, while bison graze lightly and then move on to the next area.

Who’s Faster: The Bison Or The Cow?

Bison are faster than cows, by far. While some cows can reach speeds of 25mph when running from or towards a threatening enemy, bison can easily reach 40mph.

Bison, in general, are incredibly athletic: they are agile and can make sharp turns, jump over high fences, and are also strong swimmers.

The bison’s combination of speed, athleticism, and large size simultaneously make them terrifying but strikingly beautiful.

How Can You Tell The Difference Between Bison And Cow Calves?

Despite bison being the larger animal, cows are usually born bigger! Cow calves usually weigh between 60-100lbs, while bison calves are between 30-70lbs.

Both species can usually open their eyes and begin to walk within a few hours, if not minutes, after being born.

One distinguishing factor is probably fur color: baby bison are always reddish-brown, gaining them the nickname “red dog.” As they age, their fur darkens and becomes more obviously brown.

Cow calves’ fur depends on their parents. Like adult cows, baby cows can be either white, black, brown, tan, or any two colors in combination, but usually a mix of light and dark colors.

The best way to use a calf to identify its species is to look at its mother!

Do Bison And Cows Ever Meet In The Wild?

Bison are considered “ecologically extinct” as wild species in the US. They generally live only in national parks and other small wildlife areas.

That being said, though, bison and cows – or cattle, at least – meet each other within Yellowstone National Park, for example.

Do Bison And Cows Get Along?

Floofmania found no evidence to suggest bison and cows don’t get along!

Bison and wild cows seem to generally mind their own business, staying at their specific favorite spots and grazing according to their preferences.

Can Bison And Cows Interbreed?

We are unsure if they would do it on their own, but there is a bison/cow mix called the “beefalo.” Scientists wanted to make a “superior” species that had the best qualities of both animals. They succeeded in doing so in the 1960s but only “perfected” the recipe in the ’90s.

Most beefalo are sterile, making the species unable to sustain itself without human intervention.

The strange animal has many odd stories surrounding it as well: There are many stories online of beefalo herds and animals escaping confinement.

In 2015, a herd of beefalo got lost and began leaving a trail of environmental chaos behind them in the Grand Canyon. In 2021, a beefalo escaped a slaughterhouse in Connecticut and was missing for eight months before finally being recaptured!

Who Would Win In A Fight Between A Bison And A Cow?

Being the larger, more athletic animal, it is highly likely that a bison would win against a cow in a fight.

However, among others in the cow or bovine family, it is speculated that the Spanish fighting bull would have a chance against a bison – but it still would not be a guaranteed win.

Bison VS Cows In A Storm

There is a famous story about the difference in how bison versus cows would act in a storm. As the tale goes, when a storm comes, cows will run away from the storm and, in effect, stay wetter longer. On the other hand, bison run toward the shower and simply exits it from the other side.

There is some truth to the story. We cannot know if bison know running into the storm is more effective than running alongside it. But we do know that bison face the storm because the heaviest part of their coat is on their neck and shoulders. It’s probably simply more comfortable for them because their front ends are more protected than their back ends.