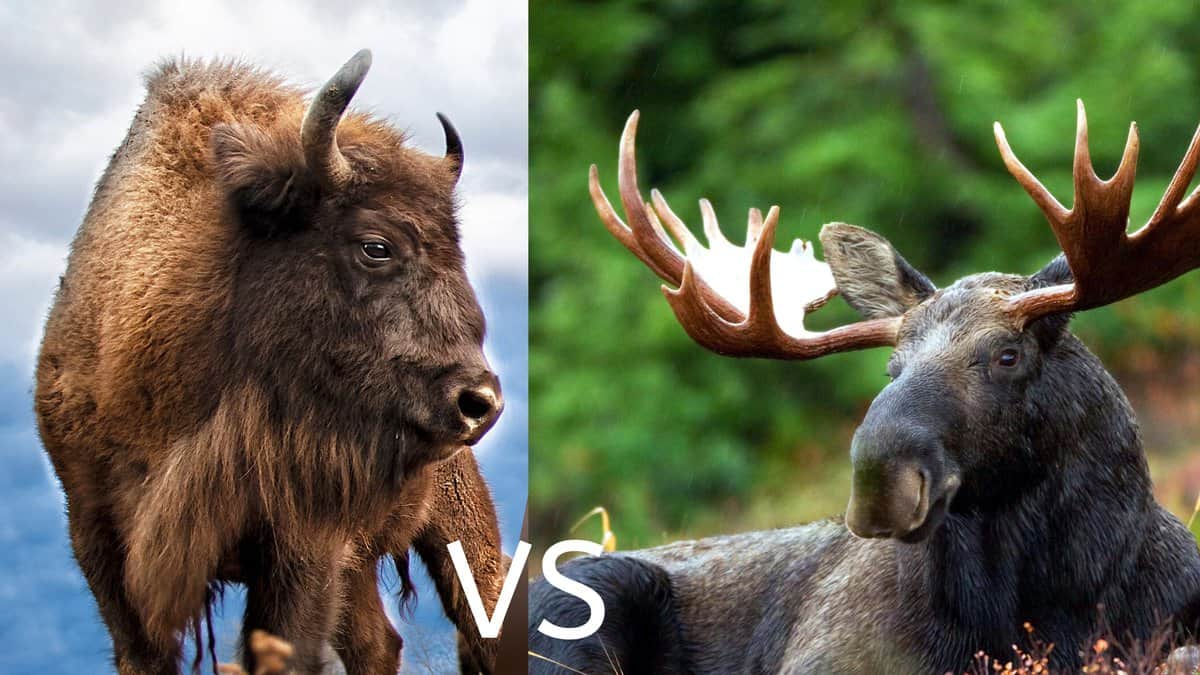 In North America, you can find many fascinating creatures in the wilderness, but few of them are as iconic as the bison and moose. Bison are some of the unique animals here, and the moose is one of the continent’s largest and most prominent creatures.

But while they might seem different, both animals also have a few similarities, which many people notice. Let’s compare the two animals in order to learn more about their differences and similarities!

What’s The Difference Between A Bison And A Moose?

A glance reveals that bison and moose aren’t exactly alike and have major differences in appearance, location, and behavior.

The most basic is their location. Although both big mammals are found in the US, the moose is not exclusively here, and you can find moose in parts of Europe and Asia that have a similar environment.

On the other hand, bison are 100% exclusive to America. While there are similar-looking animals in parts of Europe, none of them are real bison.

Another big difference is their appearance. First of all, moose and bison have very different body shapes, the moose being tall and slender, and the bison being much more stocky. In terms of fur, moose have a coat that is pretty even across their body in terms of color and thickness.

Meanwhile, bison fur can vary depending on the body part. It tends to be short around the animal’s back and mid-section but longer along the humps and legs, where it tends to be shaggy. That’s why, when you see a bison, their fur looks clumpy and uneven, but don’t worry because that’s natural.

Lastly, you have their behavior. Moose are solitary animals and prefer to live alone. They’re also quite territorial. You’ll rarely see more than one moose in a single place unless it’s a mother with calves. Bison are closer to their bovine cousins and live in large herds, and you can see dozens if not hundreds of them together in a single herd.

These are just some crucial differences, and many, that make these beautiful animals unique.

Which Is Bigger: Bison Or Moose?

Both of these big fellas are larger than humans, but the bison is the largest land mammal in North America, with bulls standing at over 6 feet at the shoulder and cows at 4-5 feet. That means most of us might be unable to look over the average bull’s shoulder.

In terms of weight, bison can weigh a whopping 1000-2000 pounds, which means the largest bison is comparable to a small car.

Although not quite as big, moose are nothing to sniff at and are the largest member of the deer family.

The average male or buck can reach up to 6 feet and weigh roughly 1400 pounds. However, that applies to moose on the mainland. A subspecies of moose known as the Alaskan moose can grow even bigger, with some bucks reaching as large as 7 feet, although that is mostly an exception.

Do Bison And Buffalo Move Differently?

Although bison and moose look pretty different, they both move similarly by trotting. Both moose and bison can reach speeds of 35 miles an hour which they typically maintain with a steady trot. However, if they need to go faster, both animals are also capable of going at a quick canter.

In particular, bison are surprisingly agile and can spin, roll, and even jump. Meanwhile, moose are relatively fast and can trot at steady speeds for long periods. Both are strong swimmers, allowing them to cross rivers and streams.

Who’s Faster: The Bison Or The Buffalo?

In terms of speed, these two big beasts are pretty close, so there is no clear winner. Both animals can reach speeds of 35 miles an hour which is over the speed limit in many places!

However, the bison has an advantage in being able to sustain that speed. Thanks to its powerful lungs, it can maintain speeds of 35 miles for around 4 hours before needing to rest. Moose, on the other hand, can only keep that speed for a short period.

The difference in how these two animals move is because of their way of life.

Bison are constantly on the move, so they sometimes walk while eating. They travel in huge herds, so they can’t stay in the same place for too long without eating it dry. That fact is especially true during winter when they travel vast distances in search of greener pastures. With such long distances, they need more stamina to keep up with the herd.

Then you have moose, who tend to stay in one place. Once a moose finds territory it likes, you can be sure it won’t leave it. They will stay there and protect it from intruders. That is why moose aren’t as well adapted for long-distance running.  Additionally, moose mostly live in forest areas, so they don’t have much room to run.

Are Bison And Moose Related?

Yes, in the way that distant cousins are related, only in the vaguest sense possible. These forest creatures are both mammals. They are also even-toed ungulates which means they are hoofed animals that put their weight on two of their toes, the third and fourth one, to be exact.

However, that is where the similarities end as these two animals diverge into different families. The bison fall under the ​​Bovidae family, where we get the term bovine, consisting of cows, buffalos, and bison.

On the other hand, moose fall under the Cervidae family, which is where most deer species belong. So you will find elk, deer, and moose under this family.

How Are Bison’s and Moose’s Horns or Antlers Different?

The most prominent feature of these great beasts is their horns or antlers. But while both sets of horns look impressive, they do so differently. Moose antlers are large, ivory colored, and uniquely shaped; some compare the shape to open hands.

Unlike other animals, a mighty moose’s antlers can grow up to six feet long and extend outward from their heads. However, they have to shed these antlers every year.

On the other hand, bison horns are much shorter but don’t let that fool you; they are no less useful. These horns are black and curve back on their heads. The shape is not as intricate as a moose; they only grow to about 2 feet, but bison do not shed them as moose do with their antlers. Although small, they are sharp, and bison can use them to protect themselves.

Do Bison And Moose Ever Meet In The Wild?

Not in the wild. Although both bison and moose share the same range, they live in different environments, so it’s rare for them to run into each other.

Bison prefer flatlands with plenty of grass; they can gather in their vast herds and roam around together. For their part, moose prefer to stay in the forests where they have plenty of food and don’t need to travel as much.

However, bison and moose can interact. In many nature reserves, there are populations of both animals in them since these places aren’t as large as the wilderness, some instances of them running into each other do happen.

Do Moose And Buffalo Get Along?

When bison and moose run into each other, they generally get along fine. Since they aren’t predators, neither will actively attack the other. However, that doesn’t mean they’re friendly, as the two prefer to avoid each other.

When they interact, it is usually because one wants something the other has, such as food. In cases like this, one usually just backs down and allows the other to have it, and there are few cases leading to violence.

Can Bison And Buffalo Interbreed?

No, that’s simply not a thing they can do. Although interbreeding between different animals does happen from time to time, such as with the liger (a mix of a lion and a tiger), they are incredibly rare. For something like interbreeding to happen, both animals must share common genes.

Bison and moose are just not that close genetically. Sure they’re both ungulates, but they take different branches on the family tree. In the case of the moose, even deer, which are very closely related to them, aren’t genetically close enough to interbreed, much less a bison.

Who Would Win In A Fight Between A Bison And A Moose?

Again, these animals are not the aggressive type, so the chances of them fighting are rare, but let’s discuss it for the sake of argument. With everything discussed, both animals have some advantages over the other.

The moose has more prominent horns, which give it a longer reach. If they butted heads, the moose would be able to keep the bison horns from its body while knocking it aside.

However, the bison is heavier and larger, so their blows have more force and can knock a moose over. Despite that, the bison has more stamina. Although the moose can trot pretty quickly, a bison can match that and maintain that speed for longer.

This is not even mentioning that bison travel in massive herds, so if a moose were to challenge one, it would have to deal with the whole herd. But even alone, a single bison is more than capable of holding its own and even winning against a moose.