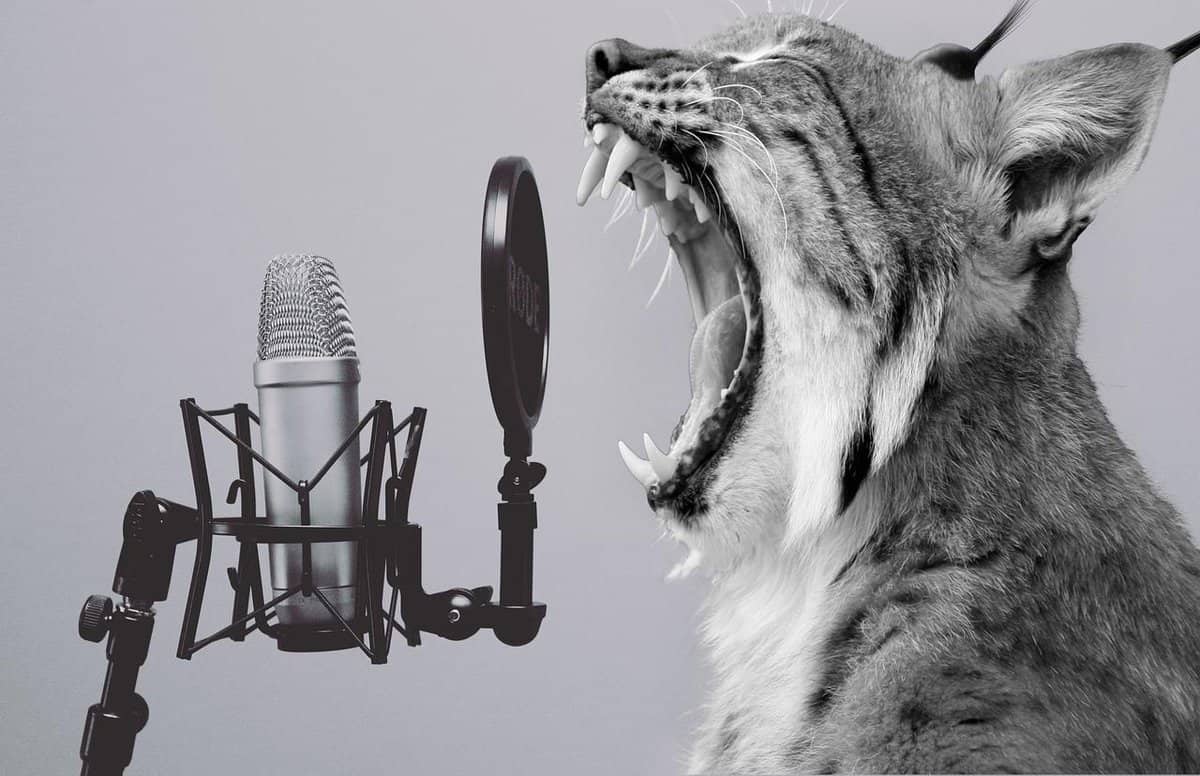 Bobcats are beautiful and dangerous animals. While they are quite scared of humans, they can attack if they feel threatened. Whether you live in a climate where bobcats are present or you are going on a trip where you may see them in the wild, you should know a little more about the sounds that bobcats make and what they mean!

Bobcats are known for making several different kinds of sounds such as meowing, growling, hissing, and even screaming. While sometimes bobcats can be quite loud, they are generally silent and stealthy hunters.

In this article, we are going to discuss the many sounds that bobcats make, including what the noises sound like, how to tell if the sound you are hearing is a bobcat, why they are making these intense noises, and how to differentiate a bobcat noise from other cats! So keep reading! You are going to be a bobcat sound expert in no time!

Sounds That Bobcats Make And What They Mean

As you now know, bobcats can make several different sounds including meowing, growling, howling, hissing, and even screaming. But what do these sounds mean?

The most common sound a bobcat will make is a loud growling. While you are hiking, you may hear these growls, and it can either mean that the bobcat is feeling defensive from you or another predator and they want to make themselves known.

When bobcats are mating, you may hear howling and an incredibly intense screaming noise, but once again, although it may sound aggressive, it does not indicate that they are on the hunt, it is strictly a communication between themselves. However, if it is mating season, it is best to stay out of their way.

If a bobcat feels as though it is in danger from a predator, they often hiss, growl, scream, or even bark. This usually means they are reacting defensively and once again does not mean danger unless you are very close to them.

Unfortunately, if a bobcat is actually on the hunt, they will most likely make no noise at all as they are looking to surprise their prey with an attack. But luckily, bobcats are fairly afraid of humans and are not a danger unless they are within reach and are threatened by you.

Now that you understand what the many bobcat sounds indicate, you may be wondering how common it is to hear bobcats make noise.

While bobcats are mostly silent hunters, they are actually quite noisy animals. With the various noises they make such as meowing, growling, screaming, and hissing in everyday situations, if there is a bobcat nearby, you will most likely be able to hear it.

What Should You Do If You Hear A Bobcat?

If you do hear a bobcat making some kind of noise, there are certain safety precautions you should take.

The best option is to create as much distance as possible between you and the bobcat. If you cannot see it but can hear it in the distance, quickly walk in the other direction.

You do not want to run, even if you cannot see the bobcat, as it may be able to see you and running could trigger their predatory nature.

If you are extremely close to the bobcat, freeze and slowly walk away. If you are within a few feet and have a water bottle handy, spraying them with water will confuse and deter them from attacking.

Do Bobcats Communicate In Other Ways Than Making Sounds?

Just as humans do, bobcats sometimes use noise to convey their location and current situation. However, they mostly use other forms of communication to contact each other.

During mating season, the bobcat will let out a loud scream or screech as their mating call. This most often happens at night and can lead to fights among the male bobcats. There is no doubt that you will hear these screams if they are happening nearby as they are incredibly loud and unpleasant.

Other than during the mating season, the noises that bobcats make are not often signs of internal communication.

In fact, they usually use scents from urination and fecal matter to let other bobcats know where they are going and which territory is already claimed.

When it comes to warding off predators, bobcats do use noises such as hissing or even little chirp-like barks, but they also use facial expressions at close range to deter an attack.

In general, while bobcats are quite noisy creatures, their sounds are not their main form of communication amongst their own.

What Are The Primary Sounds That Bobcats Make?

Understanding what a bobcat is trying to communicate with their sounds is important, but you first need to understand the various sounds they will make and how to identify them.

Yes, bobcats do growl. Most often they will growl when they feel threatened and the sound will become especially loud during mating season or when they are trying to protect their young or their food.

A bobcat growl sounds menacing and deeply guttural. As opposed to a bobcat’s scream, which we will discuss shortly, the growl is not often extremely loud so if you hear one, you are most likely close by and should plan your retreat.

While a bobcat can technically howl, it does not sound anything like a typical wolf’s howl and sounds much more like a cross between a scream and a growl.

They will only howl when looking for a mate, mating, or if they are feeling protective. The howl sounds quite terrifying and if you hear it, you will know to get out of there!

Bobcats absolutely bark, in fact, they will often let out several little barks that sound like bird-like chirps. When threatened, their barks can sound quite cough-like and it is a sound you most likely have never heard before.

If you hear an extremely loud bird or what sounds like an animal coughing out in the wild with a deep vocalization, it very well might be a bobcat.

Often, bobcats will hiss when they are feeling defensive. It can sound a great deal like a domesticated cat’s hiss and is not nearly as loud as their other noises.

You need to be up close and personal with a bobcat to hear their hiss, and it usually means they are scared and may attack if provoked.

Interestingly, a bobcat will meow, and it will sound extremely similar to the meow of an average house cat.

It is not one of the more common noises they make and unless you have a wilderness camera set up, you will likely never hear it yourself.

If a bobcat is meowing, it is most likely making itself known to its surroundings, it is not typically used as a mating call or as a threat.

Bobcats certainly can purr like a cat would, however, unless you have a bobcat that knows and loves you, you will never hear one.

In order for a bobcat to purr, just like a domesticated cat, they need to be calm and happy, and any bobcat you see in the wild will likely be on the prowl or acting defensively.

Of course, you also have to be extremely close to a bobcat to hear them purr, which can really only happen in close quarters.

Bobcats will make moaning noises and they are actually the most common noise a human will hear from this intense and dangerous animal.

In the night, especially during mating season, you are likely to hear a bobcat moaning or screaming and it is almost impossible to miss.

Reports all agree that it often sounds like a woman moaning or screaming who is suffering and it is quite horrible to hear.

What’s A “Yowl” And Why Do Bobcats Make Them?

A “yowl” is defined as a loud screaming or crying sound of pain or distress. Bobcats will make a yowling sound during the breeding season.

Males will yowl to alert other males of their presence and ward off a fight, whereas females often yowl before mating and when protecting their young.

Why Do Bobcats Scream?

If you have heard one of the many ways that a bobcat screams, you won’t quickly forget it. It often sounds like a woman in complete turmoil, and it can be both alarming and incredibly terrifying.

It is important to understand that bobcats do not scream when they are ready to attack, in fact, they really only scream during mating season to communicate with other bobcats.

However, if you do hear a bobcat scream, the best protocol is to slowly walk away in the opposite direction so as not to attract their attention.

Do Bobcats Have Specific Mating Calls And Sounds?

As you now know, bobcats vocalize the most during mating season. They have very specific moans, screams, barks, and yowls that can express to other bobcats in the area exactly where they are, what they are looking for, and even what they are doing.

Because bobcats are usually solitary creatures, mating season is one of the only times when they actually communicate with each other, so their mating calls are necessary and informative and will let each other know their location and actions.

An angry bobcat is impossible to miss. If they have been cornered by a human, predator, or another bobcat, they will make intense noises and even facial expressions that express their anger.

Angry bobcats sound similar to an angry cat, but on a whole other level. Mostly they will growl a guttural sound that is both deep and horrifying. They may also hiss or howl, but the growl is certainly the most common response.

What Sounds Does A Bobcat Make When Scared?

When a bobcat is scared, it will likely hiss, bark, growl, or even scream. While a scared bobcat may sound similar to an angry bobcat, it is their body language that will actually portray their emotion.

A scared bobcat will often retreat slowly while making intense noises, whereas an angry bobcat may slowly inch forward.

If you come in close contact with a bobcat, whether it is scared or angry, it is still best to slowly back away and put as much space between you and the animal as possible.

How Do Bobcats Sound Differently Than Mountain Lions?

To the untrained here, a bobcat does not sound much different than a mountain lion. In fact, just like bobcats, mountain lions also hiss, chirp, bark, growl, and scream.

Mountain lion screams have also been compared to a woman crying or screaming, and the sound is extremely unpleasant to human ears.

The good news is, if you hear a loud cat-like growl or woman-like scream in the wild, you don’t need to immediately differentiate if it is a bobcat or a mountain lion making the terrifying noise as the safety reactions are the same.

Slowly proceed in the direction away from the noise. As an extra precaution, you can start singing or playing music! Luckily. Both bobcats and mountain lions are quite afraid of humans and are unlikely to pursue if they hear human voices.

How Can You Tell If You’re Hearing A Bobcat Or A House Cat?

While some house cat sounds may be similar to a bobcat such as hissing, meowing, or even screaming, a bobcat vocalizes at a far more intense volume.

House cats are quieter and far less aggressive with their sounds, and a bobcat sound is almost impossible to miss, even from a distance.

Once again, if you are in a location in which bobcats are prevalent and you hear a hissing, growling, barking, chirping, howling, or screaming sound at a loud volume, the best thing to do is assume it is a bobcat and turn the other direction from the sound and slowly walk away.