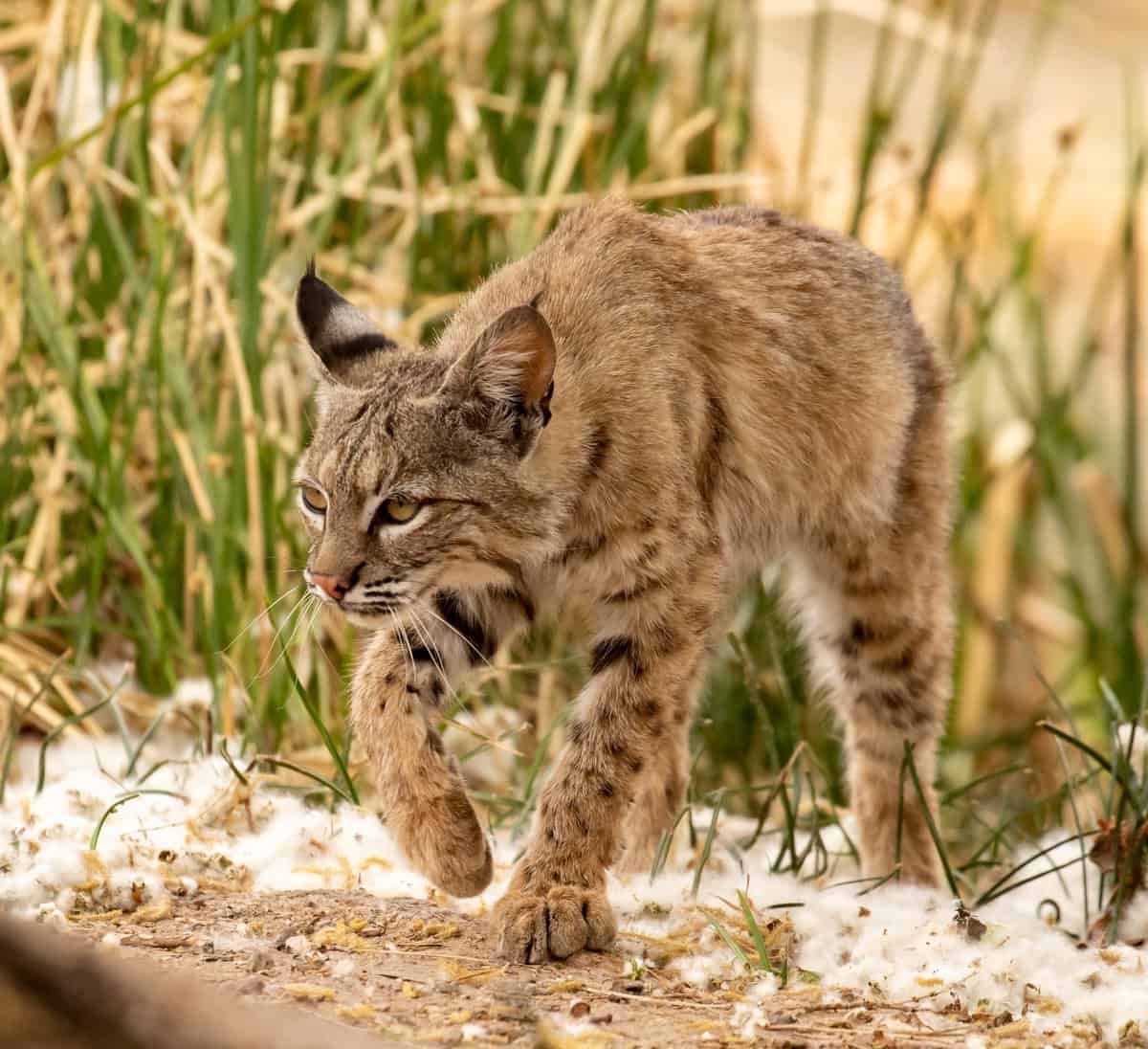 Bobcats are solitary mottle-furred animals that heavily guard their territories. They choose far-ranging wildlands as their home and require a ton of personal space far from their own kind and even predators.

The behavior and nature of these cats make them seem immune to imminent danger. Yet as any member of the animal kingdom, these bobcats are vulnerable to wildlife threats.

What threats might endanger these beautiful cats? Are bobcats really that elusive to predators and humans? Stick around as we answer these questions and go through each possible threat.

What Are The Primary Dangers To Bobcats?

Although only a few predators target bobcats, humans and diseases pose the biggest threats to the species.

Their food chain dominance helps in fending off predators, but it also exposes them to a lot of diseases that they can get from their prey.

Harmful microorganisms such as bacteria, protozoa, and viruses pose the second largest threat to the species.

Furthermore, they can also pass these pathogens to human beings as zoonotic diseases.

And it doesn’t end there…

Ever heard of “Bobcat Fever?” Well, you better keep your household cat from acquiring this potentially fatal disease.

Keeping this vital information in mind will help you to steer clear of the wildcat if you encounter one.

Meeting one is not a distant possibility as human beings, unfortunately, pose the biggest threat to the species.

Hunters seek out bobcats for sport and their fur. Disastrously, they also lose their wildlands to humans and are forced to cross highways and interstates dangerously. These cats are not picky eaters, yet human settlements encroaching their hunting ground limit their meal sources.

What Animals Prey On Bobcats?

Bobcats are preyed on by two major groups of predators depending on their age.

Bobcats are almost twice the size of a household cat. They can measure up to 2 to 3 ft. in length.

In addition, adults are known to prey on bigger animals such as deer during winter using their strength, stealth, and keen senses of sight, smell, and hearing.

However, their size and bite force are no match to someone at the very top of the food chain or an apex predator – the mountain lion.

The cougar weighs thrice as much as the bobcat, with its longer canines having twice the bobcat’s bite power.

The same scenarios apply to a timber wolf and the slightly larger coyote.

Other mammals such as wolves and foxes particularly prey on bobcat kittens.

Food scarcity and competition, especially during harsh weather conditions, are the major causes of this predation.

Juvenile bobcats are also small enough to be preyed on by opportunistic predators. These kittens only weigh 10 to 12 oz. or half a block of butter when born!

Hawks, eagles, and large owls can quickly snatch a kitten from its nesting den while the mother is out for a hunt.

It’s sad, but that’s just how the circle of life and survival of the species in the wild goes.

How Do Humans Pose A Threat To Bobcats?

Unsurprisingly, most experts consider humans as major predators to the species.

They came up with this conclusion because of these three significant factors:

In the early 1900s, bobcats were mainly trapped and hunted for their beautiful, soft fur. The value of their pelts increased together with the demand.

In areas with the densest bobcat population, prizes and bragging rights await trophy and sport hunters. They aim to win categories for “the biggest female” caught or the cat with the “smallest ears.”

Bobcats are only one of the few species hunted for the thrill and not to put food on the table.

Fortunately, the near extinction of the species led to the establishment of international protection for bobcats in the 70s.

Many states also now regulate these hunting activities with strict limits and seasons.

Since 2003, numerous studies have used bobcats as model organisms in determining how public roads affect carnivores.

For example, a research paper from 2019 showed that interstates 70 and 77 in Ohio were particularly dangerous to bobcats.

The cats of the Felidae family risk their lives while crossing these busy lanes of heavy traffic. But they are just trying to get across the highways built adjacent to forests and their natural habitats!

Road engineering options are understandably limited, but posting warning signs might be the simplest yet most effective measure.

Habitat Loss is a Major Threat To Bobcats

However, human settlements and land developments are pushing these cats into thinner, isolated regions, and even suburban areas.

Furthermore, their shy and human-evasive nature makes them want to avoid highly populated and developed areas as much as possible.

But left with no choice, they are highly adaptable individuals capable of catering to altered habitats.

For example, bobcats have learned to prefer to hunt during dusk and dawn or live a crepuscular lifestyle to avoid human interactions, although they can still be active during the day.

Bobcats also prey on over 50 species and prefer whichever is most abundant in an area.

Some of these prey are:

This food chain dominance is the main reason why farmers treat these cats as dangerous to their livestock.

Moreover, researchers have found that most of their agricultural prey are pests like mice, rats, and even insects.

So better ease up on the traps and poisons, perhaps?

Are Bobcats Prone To Catching Diseases?

Yes, the bobcats’ chances of survival in the wild can be greatly affected by diseases and parasites.

A 2012 study in California has revealed that feline scabies was a significant mortality factor for bobcats. In addition, feline immunodeficiency virus (FIV), leukemia, and distemper can also infect these bob-tailed cats.

Aside from being infected and acting as carriers, bobcats can transmit pathogens to humans.

Zoonotic diseases such as giardiasis and cryptosporidiosis can cause diarrhea to the unfortunate victims.

In contrast, bartonellosis and toxoplasmosis can affect the nervous system and cause mind-altering effects.

Remember the reclusive nature of bobcats towards humans? All of that goes away when they’re rabid.

Rabies causes them to act erratically and go out of their usual ways of living to search for the virus’ next victim.

In addition, the “Bobcat Fever” targets domestic cats. While the namesake, bobcats, appear unaffected by the parasite as its host, the infection could be fatal to your beloved pet.

Are Bobcats Endangered Or Threatened In Any Way?

Fortunately, bobcats are currently not threatened or endangered due to conservation efforts through the years.

The IUCN or the International Union for Conservation of Nature accordingly classifies these North American cats of the Lynx genus as the least of concern among other species.

These cats are also under the protection of appendix I of the Convention on International Trade in Endangered Species (CITES).