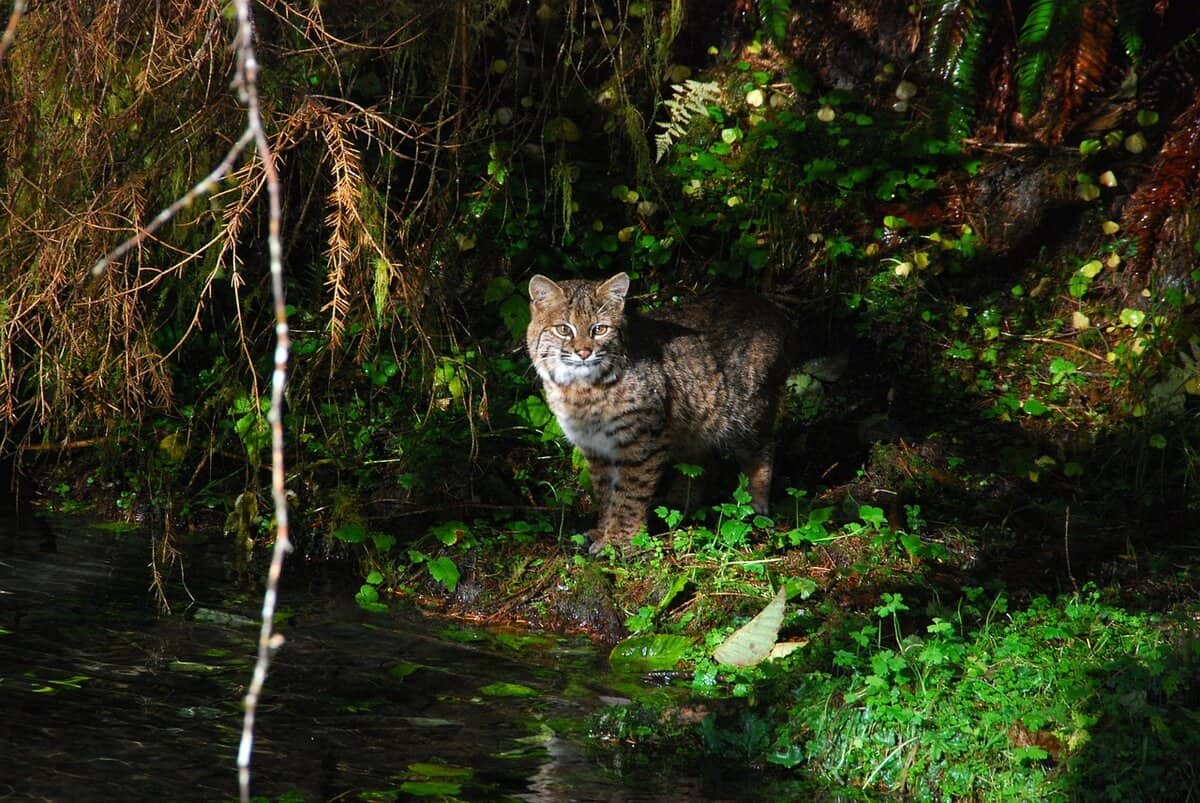 Bobcats, like most cats, are not big fans of water and swimming but they do frequent bodies of water like streams, lakes, ponds, and rivers to hydrate.

Water is part of their daily interaction with nature so it is never far away, bobcats are always around water.

Bobcats drink water at least once a day, more if they are in close vicinity of water.

What Do Bobcats Drink?

Bobcats drink water, to be specific, they drink clean fresh water from natural sources although they will drink from unnatural sources if they stumble upon one.

Water is a necessity for a bobcat’s survival, they will drink water wherever and whenever they can find it.

You could also argue that bobcats drink the blood of their prey animals although this is unintentional since they get to ingest the blood when eating the meat. The quantities also aren’t very big, since the animals they prey on are small, and most blood probably goes to waste.

Aside from that, bobcats do not drink any other forms of liquid, only water!

How And Where Do Bobcats Find Water?

Have you noticed that bobcats, like most wild animals, tend to hang out where the good water sources are? Do you want to know their secret?

Bobcats have different ways to track water sources and find new ones if they have to.

Food and water are two of the major necessities of bobcats for survival because, without them, they won’t last to see another sunrise.

Bobcats Can Smell And Feel Moisture In The Air

Bobcats and other wild animals have specialized senses that allow them to smell and feel the moisture in the air with a greater sensitivity compared to humans.

It means they can smell and feel the water from far away and can lead them to the exact spot of the source like a lake, pond, stream, river, and other watering hole.

It is like having a GPS for finding water, how convenient is that?

Bobcat Kittens Learn About Water Sources From Their Mothers

Bobcats learn all about survival from their mothers in their first 6 months of life, and experience right after that.

They remember the location of water sources when they go to the watering hole with their mothers, and they’ll return to the same place throughout their lives.

This is basic information that is implanted in their minds and they will not forget it because it is vital for their survival.

Bobcats Learn About Good Water Sources Through Travel And Exploration

Bobcats get to know their territory by heart through travel and exploration because they are always on the go and on the hunt.

When, in their everyday lives, they stumble upon watering holes and clean drinking water, they’ll take note, and keep returning to the same place if they’re close by as they navigate forest edges and other hunting areas near water.

For bobcats, food tends to concentrate near water because just like bobcats, other animals are looking for good water sources too!

Bobcats Learn About Water Through Other Bobcats And Other Animals

Bobcats learn about water sources through:

Oftentimes, bobcats discover water by accident or as a result of another activity, usually hunting and finding mates. These activities require traveling and exploration which the bobcats do all the time throughout their life, especially the make bobcats.

Bobcats only drink unclean water if they have no other choice, otherwise, they only drink clean water. They don’t drink salt water just like us because saltwater is not healthy and it does not taste good.

Only a handful of land animals have adapted to drinking seawater but even then, they still need to drink fresh water to supplement their hydration needs.

But why would a bobcat drink dirty water?

Bobcats Only Drink Unclean Water Out Of Necessity

First, let us define what clean and unclean water is for bobcats: Stream water or river water may be unclean for us humans but they are often perfectly fine for bobcats and other wild animals.

Most water in streams, lakes, rivers, ponds, and other natural water sources is clean enough for wild animals. Animals develop resistance against bacteria and their immune system adapts and builds endurance.

The only times bobcats may drink murky, stagnant, dirty water is if they have no other option and they have to drink to avoid dehydration.

Bobcats Do Not Drink Salt Water

Bobcats, like most land animals, and even humans do not drink salt water because its sodium content will only make them even thirstier.

Saltwater can cause severe kidney damage if drunk regularly or in great amounts. Who likes salt water anyway?

The salt in salt water draws out water from the blood into the intestines which leads to diarrhea, vomiting, and dehydration. Not exactly what you’re after when drinking water?

Can Bobcats Get Hydrated Through Their Food?

Yes, bobcats and other predators get hydrated from the smaller animals they eat although it is not enough to survive on. They still need a lot of water from natural sources.

Bobcats prey on the following animals:

Their list of prey has high water content in their bodies so they are a good source of water and hydration.

Bobcats do not waste their food, they eat everything including drinking their blood. They get well hydrated from their food but water is still their main preference for hydration. Nothing beats fresh water in the wild!

How Long Can Bobcats Go Without Water?

Bobcats can go for days, even weeks without food but they cannot survive more than a few days without water. Water is more important than food as is for most animals, even humans.

Bobcats can go for 3 to 7 days without water depending on the bobcat’s health and vitality, if they are sick, or have recently been fed. There are many factors that can affect their chances of surviving a few days without drinking water.