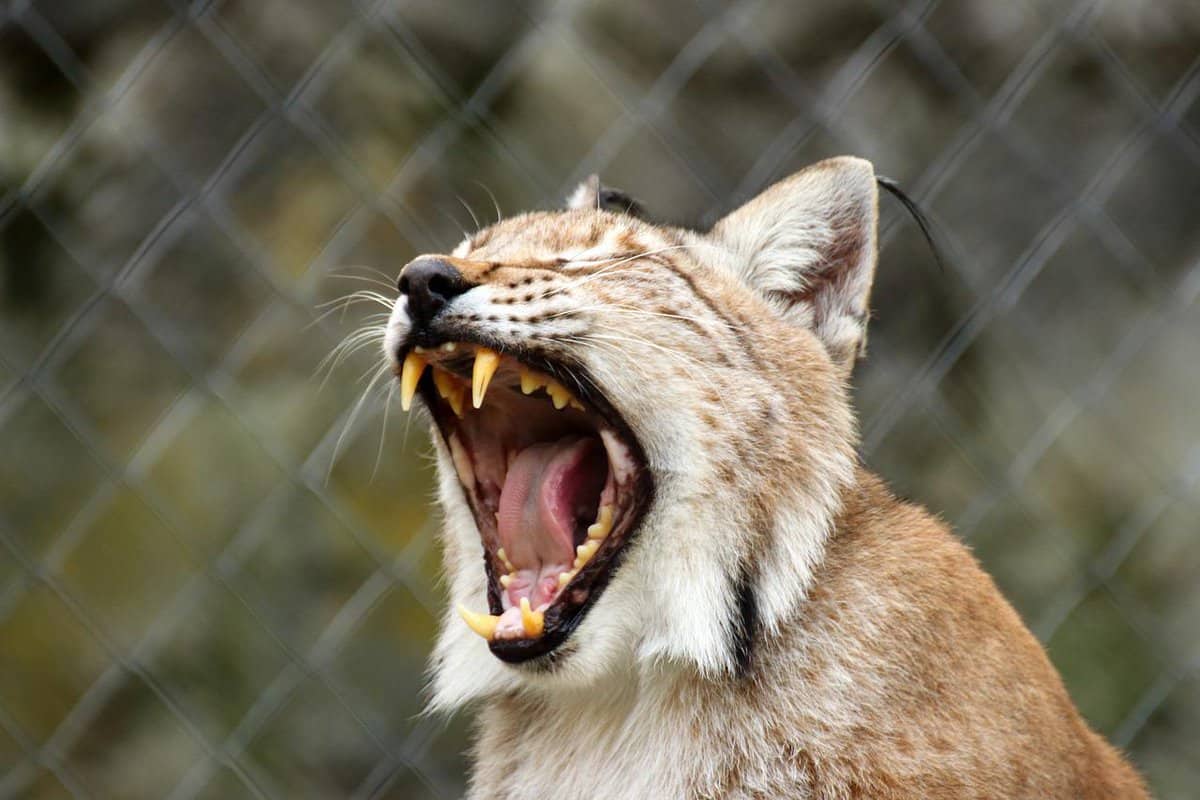 Fighting is a natural instinct for survival for all wild animals, it is necessary because their life depends on it.

Bobcats have a lot on their plate, they need to constantly hunt for food to stay healthy, they need to keep a shelter, compete with others for mates to reproduce with, and they have to ward off, dodge, or fight predators all the time to survive.

How Do Bobcats Fight And Protect Themselves And Their Young?

Bobcats fight fiercely when cornered or threatened by other animals including humans. They bite, scratch, kick, push, pounce, and make loud noises when fighting.

They use their retractable claws that are as sharp as razors and large sharp teeth with powerful jaws, they can pack a very painful bite.

A bobcat can accelerate in a burst of 25 to 30 miles per hour which means it can attack in an instant, you won’t see it coming!

Bobcats are usually not aggressive because they are shy and stay away from other animals and humans. They love being alone, just minding their own business.

They are only aggressive when they are hunting or pursuing prey or when they feel threatened especially if they have young kittens.

Female bobcats are extremely protective of their young and will defend them with their lives. There is no one fiercer than a protective mother! This trait transcends all species, don’t you agree?

Do Bobcats Fight Each Other and Why?

Bobcats usually leave each other alone except during mating season in early January and February when male bobcats compete for a receptive female.

Their fights are very intense and aggressive, they usually end up bloody with missing patches of fur and big cuts.

During mating, the male can become very angry and aggressive because sometimes the female changes her mind. The male bobcat bites the female in the back in an attempt to keep her still so they can continue mating, but most of the time, the female will retaliate and bite back.

It usually becomes an intense fight until one prevails and the mating can commence. They usually end up with split ears and bloody fur.

Do Only Male Bobcats Fight?

Most of the time, it is the male bobcats that get into fights with other bobcats and other animals but when provoked, female bobcats fight too.

Female bobcats are very protective of their young and their homes and they will not hesitate to pounce if they feel that their offspring are in danger.

Just like most wild animals, bobcats fight only when they have to, regardless of their gender.

Are Bobcats Noisy When They Fight?

Bobcats scream in a very loud, high-pitched voice to frighten their enemies, they are very noisy when they fight!

They snarl, hiss, squall, scream, and spit and it is the male bobcats that make louder noise.

Male bobcats are loudest when they are fighting over a female during mating season.

How Does The Bobcat Defend Itself?

Bobcats defend themselves by marking their territory with urine and their smell. This is their way of warning predators and other animals to stay away and keep off their territory.

They also camouflage themselves by changing their fur colors to blend in with the colors of the season.

Their last line of defense is aggression when all else fails. They fight to protect themselves, their offspring, and their territories.

Will Bobcats First Warn An Aggressor?

Bobcats use their smell and urine as an initial warning to predators and aggressors. It is their version of a “Keep out. Private Property” sign.

If that does not work, they make loud screams, snarls, and hissing sounds as spitting to intimidate and warn their enemies.

When push comes to shove, bobcats will fight and defend themselves otherwise they won’t survive.

Do Bobcats Tend To Flee When Confronted?

Bobcats are usually not aggressive, especially against people, choosing to flee when seen and approached. However, there are exceptions:

You should always keep a good distance, if you see a bobcat in the wild, because even though they’ll usually try to run away, they may become aggressive in some situations.

Do Bobcats “Let Go” or Do They Keep Fighting?

Most of the time, bobcats keep fighting and keep their sharp teeth and powerful jaws locked in their enemy’s neck until it stops moving.

There are very rare instances though, that they let go of their enemies and let them escape.

Bobcats fight for survival, that is part of their natural instinct so they will keep fighting until the battle is won.

Besides Other Bobcats, Which Other Animals Do Bobcats Fight?

Bobcats are solitary animals so they keep to themselves and stay away from other animals, especially those that are bigger than them.

In the wild, this is hard to do because bigger animals and other aggressors are always on the hunt. Bobcats are always on alert from predators like mountain lions, coyotes, foxes, wolves, owls, etc.

When faced with a predator and fleeing is not an option, bobcats fight for their lives!

How Do Bobcat Moms Protect Their Young From Attackers?

They have multiple dens in one area and they tend to move dens as often as once a day to keep their cubs safe. Female bobcats fight other females and other animals until their enemies back away using their razor-sharp claws and teeth.

Mother bobcats feed and protect their young for at least one year after they are born. They teach their cubs survival skills so they have a better chance of survival when they do leave their mother’s side.