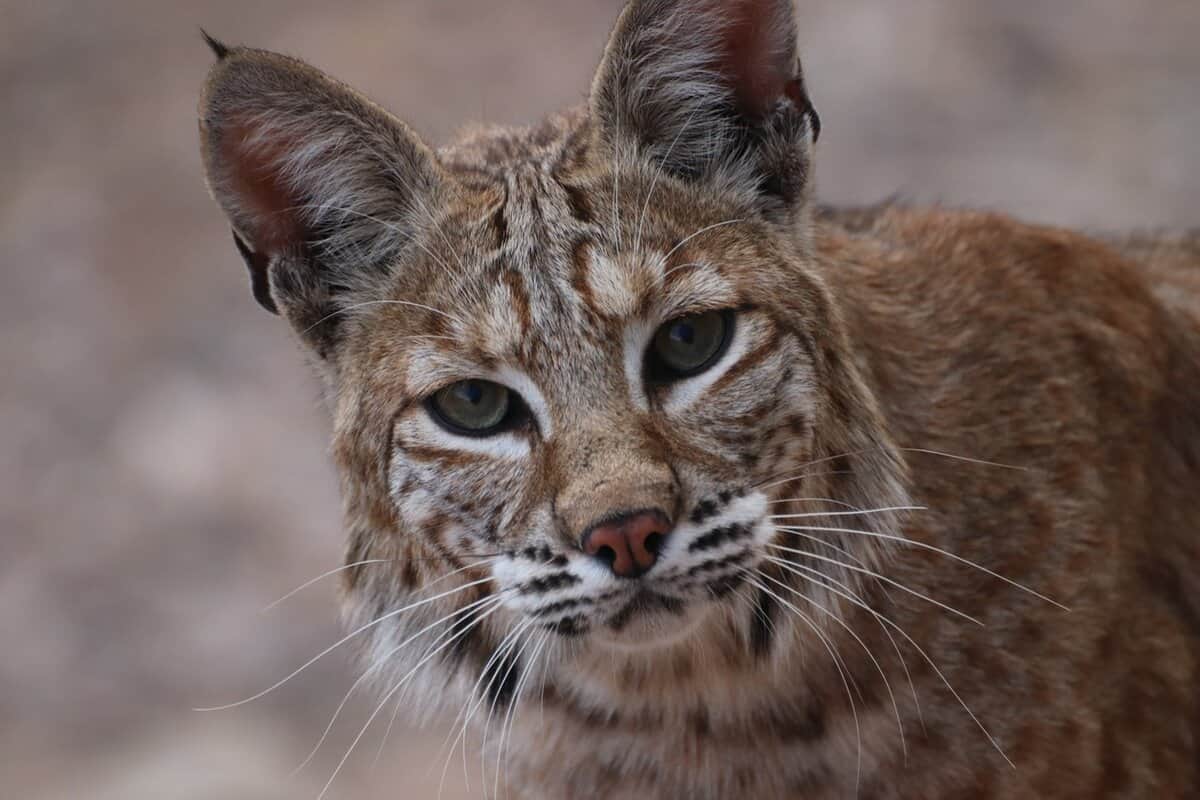 One of the most distinct characteristics of a bobcat is its physical appearance. Their appearance makes them easily distinguishable as a member of the Felidae family.

Aside from that, the bobcat’s fluffy coat makes it feel warm in cold seasons and protected during the scorching summer heat. Meanwhile, its whiskers guide the bobcat through the dark. And lastly, its tail helps it hunt its prey.

Now, would you like to know all of the hairy details about bobcats? Keep reading this article as we explore everything worth knowing about a bobcat’s fur, whiskers, and tail!

Do Bobcats Have Soft Fur?

According to an article from Montana Field Guide, bobcats have extremely soft fur that makes them look more majestic. The bobcat’s soft and dense coats also help them stay warm even in cold weather. The outer layer of the coat is composed of long guard hairs, which protect the softer undercoat from dirt and rain.

Aside from that, a bobcat’s fur also allows them to camouflage! This skill is very crucial to surviving in the wild, and for sneaking up on its prey.

Check out this short Youtube video to see a bobcat being a master at camouflaging:

Do Bobcats Have Winter and Summer Coats?

Yes, bobcats have both winter and summer coats! Their coats in the winter are thicker and longer which helps protect them from the cold weather. As the weather gets warmer, the bobcat sheds much of its winter fur and its coat gets thinner and the hairs shorter. This helps them stay cool in the heat.

Aside from the length of the hairs and the thickness of the fur, bobcats’ coat colors can also change depending on the season. In the cold months, bobcats are grayer in color, which helps them blend in with the snow and grime of the season.

In the warm months, bobcats are more reddish in color.

So, next time you see a bobcat, take a closer look at its coat. You might be able to tell if the summer or winter season is approaching just by looking at their fur!

Do Bobcats Look Differently Depending On The Season?

Since a bobcat’s coat thickness, length, and color change according to the season, they might look slightly different depending on the time of year. If you’re not a wildlife expert, however, it’s not guaranteed that you’d be able to tell the difference, because they’re not that different.

For example, according to the Feline Conservation Foundation, their fur looks reddish-brown during summer and grayish in winter.

However, you should note that not all bobcats undergo significant color changes. Some bobcats might look grayish-brown during the summer months as well, which means that effectively, the change in color is not that noticeable.

Compared to domestic cats, bobcats do not shed that much. Bobcats only shed their coats twice a year to adjust to the changing seasons. As previously mentioned, bobcats have thinner coats during summer. Thus, they usually shed around springtime to prepare for the warm season.

What Color Is A Bobcat’s Fur?

Bobcats have a grayish to reddish brown coat that is spotted and striped with black. Bobcats can range from buff-colored, yellowish, or white with black spots. Bobcats may also have an extra-fluffy ruff of fur around the neck.

The color of a bobcat’s fur can also vary depending on the geographical location. For example, bobcats in eastern Washington are typically lighter in color than those found in western Washington.

In addition, there are rare instances where a bobcat is completely black. According to experts, this is due to melanism. Melanism refers to an increase or unusual amount of black pigmentation in any person or organism. It’s sort of the opposite of albinism, which also is a thing with bobcats.

Melanistic bobcats are so rare that there are fewer than 20 confirmed sightings. Albino bobcats aren’t common either, but they do happen once in a while. Albino bobcats have completely white fur, and the animal often has red eyes.

Can Bobcats Have Different Colors and Patterns?

Yes, bobcats have various colors and patterns! As mentioned, a bobcat’s coat colors can range from shades of brown, red, white, and yellow.

As for the patterns, bobcats have prominent black or brown spots and stripes on their bodies. The back of their heads and necks have a dark brown or black “mantle,” and the rest of the body is lighter with dark spots. The belly and undersides are usually white with black spots.

In addition, did you know that a bobcat’s coat pattern is like a fingerprint? Since all bobcats have different sets of coat patterns, it is used to identify a bobcat from another bobcat.

Also, bobcats’ coat patterns never change, which means that their pattern will be the same from birth to adulthood.

Why Do Bobcats Have Tufts On Their Ears?

First, what are ear tufts? The hair that stands from the tops of the bobcat’s ears is referred to as cat ear tufts or lynx tips. Now, what are these for? According to the Smithsonian National Zoo,  bobcats have tufts on their ears to improve their sense of hearing.

Moreover, ear tufts in general are thought to help in transmitting the sounds directly to the animal’s ears, making their senses and hunting skills more acute. Lastly, the tufts also help in keeping the bobcat’s ears free from dirt or debris.

What Does A Bobcat Use Its Whiskers For?

A bobcat’s whiskers are actually very sensitive and play an important role in the animal’s daily life. The long, stiff hairs that make up the whiskers help the bobcat feel its way around in the dark and detect prey that may be hiding in tall grass.

While whiskers may seem like a small feature, they are actually essential to a bobcat’s survival.  Since bobcats’ whiskers are very sensitive, it allows them to detect objects and movements above their head. Whiskers also help bobcats navigate tight spaces and identify the best place to hunt their prey.

Next time you see one of these beautiful creatures, take a moment to appreciate all the way their whiskers help them thrive in the wild!

A bobcat’s tail is black-tipped with white on the underside. It is also quite short, compared to the tails of other cats. The tip of the tail is often hard to see because it blends in with the animal’s fur.

Moreover, their tails help in distinguishing them from lynxes. Since bobcats and lynxes look very much alike, people use their tails as a basis for figuring out which is which. The bobcat’s tail looks almost like it’s painted with a black top and a white bottom. Meanwhile, a lynx’s tail is fully covered in black.

How Long Is A Bobcat’s Tail?

Unlike other wild animals, the bobcat’s short “bob-tail” is only about 2 to 8 inches long. This length is quite a bit shorter compared to their closest cousins, the lynxes.

Why Do Bobcats Have So Short Tails?

Bobcats have not developed a long tail because they hunt for rodents and hares that mostly move along the ground. A longer tail that twitches and moves around might end up giving away the bobcat when it’s hunting ground-dwelling animals, or even tipping off one of the bobcat’s own predators.

Another interesting fact is that the name “bobcat” is derived from their most distinct characteristic – having a short, bobbed tail.

What Does The Bobcat Use Its Tail For?

Despite their tail being short compared to other animals’, it still has a significant role in a bobcat’s life. So, what’s the purpose of a bobcat’s tail?

The bobcat uses its tail for balance when climbing trees and jumping. It also wraps its tail around itself when sleeping. And as mentioned before, a bobcat’s short tail is less eye-catching and helps them be a little more stealthy when hunting.

Are Bobcats Sometimes Hunted For Their Fur?

Unfortunately, bobcats are extensively exploited for their pelts, particularly to supply the global market for spotted furs.

Historically, the 48 contiguous United States, Canada, and Mexico were home to bobcats. But, because of the hunting for their fur, bobcats’ population in the Midwest of the United States and Central Mexico drastically decreased in recent years.

In addition, based on the article from National Geographic, fur trappers perceive a bobcat’s fur as the “biggest prize”. This is because the selling prices for a fine bobcat fur coat can reach $150,000, which is why bobcats are often targeted by poachers.

What Are The Laws That Protect Bobcats Against Illegal Poaches?

In January 2022, Colorado legislators introduced Senate Bill 31 – a law made to put an end to trophy hunting of several wild animals such as bobcats, mountain lions, and lynxes.

Thousands of bobcats per year are currently being hunted for bragging rights or to sell their pelts on the international market.

Moreover, there is also the Bobcat Protection Act of 2013 that bans commercial hunting and trapping of bobcats in California. Lastly, according to the International Society for Endangered Cats, bobcats are completely protected in ten American states.