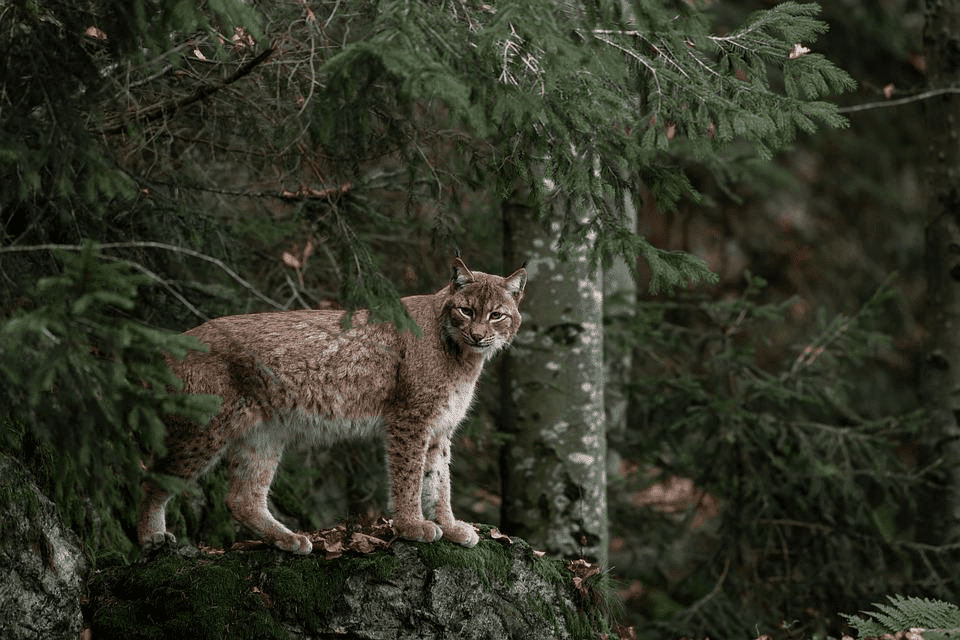 The bobcat (Lynx rufus) is a wild cat found in North America, from southern Canada to northern Mexico. The species’ “bob” isn’t referring to its haircut – it refers to its short and stubby tail that looks cut or “bobbed” at the end and also to its bobbing gait. Additionally, because of its brown to reddish brown, floofy fur, the animal is also referred to as a red lynx.

Cats’ long tails give them agility and balance, especially when running and jumping. Since bobcats have shorter tails than most felines, how does this affect their ability to jump? Can bobcats still jump, and are they good at it? Floofmania jumps in!

Are Bobcats Good At Jumping?

Like most wild cats, bobcats are expert jumpers. Mostly they do so for hunting purposes. But exactly how good are they, and why are they that good?

How Far Can A Bobcat Leap?

Bobcats can cover distances of up to twelve feet in a single leap. They will fearlessly leap over waterways, rocky slopes, snowy banks, and even trees to get to their destination or to hunt.

How Tall An Obstacle Can Bobcats Jump?

There are many, many reports of bobcats easily jumping over fences and walls six feet high, while some speculate that bobcats may be able to jump up to ten feet straight up into the air.

Onlookers have reported bobcats leaping to catch birds in the air, reaching rooftops of houses to chase a squirrel, and running and jumping on cliffs chasing wild prey.

It’s a good thing bobcats don’t have a fear of heights!

How Are Bobcats’ Bodies Built For Jumping?

Bobcats are expert jumpers because they were born for it – their physique is perfect for the skill despite their shorter tail, and jumping is a natural part of each bobcat’s instincts.

Cats are one of the most flexible mammals, and the bobcat is no exception – it has an extremely flexible backbone that can practically bend into a U-shape when the animal is stretching or arching its back. This allows them to easily twist and move into positions that best prepare them for big leaps, like a sprinter getting into a starting position.

Additionally, bobcats’ hind legs are longer and stronger than their front legs. This feature enables them to make longer strides and gives them the ability to stretch their bodies further, especially while jumping.

Together, their physical features make them efficient ambush predators to the unsuspecting prey and fierce opponents to their challengers.

Do Bobcats Naturally Know How To Jump And Hunt?

Bobcats are also such good jumpers because they are trained for it when they are very young.

Baby bobcats live with their mothers in their den until they are nine or twelve months old. Before that time, however, their mother does her best to prepare them properly by giving them hunting lessons.

Baby bobcat hunting lessons usually begin when they are five months old and include climbing on trees and jumping to ambush their prey. Though it looks a lot like play and pouncing on siblings, the kittens are developing crucial skills they will need to survive in the wild.

As the kittens grow and continue honing their skills through the years, they will eventually become experts at hunting on rocky terrains and heavily wooded areas, seemingly effortlessly jumping, pouncing, and sprinting.

Watch a mother bobcat teaching its kitten to hunt:

Why Do Bobcats Jump?

Why Do Bobcats Jump To Hunt Or Find Food?

Bobcats use a similar strategy to mountain lions when ambushing prey in the wild: They quietly lie in wait on a tree or some other elevated, hidden area for prey to approach. When their target is within range, they use the tree as a jumping board for extra power when pouncing on and attacking their chosen animal.

Sometimes, they chase their prey by jumping from tree to tree instead of in a ground race. This is because even though bobcats are swift runners, they do not have much endurance.

Bobcats are known for their willingness to take on prey bigger than themselves, such as deer. They will also happily feed on animals in trees, such as birds in their nest or young squirrels.

Urban residents report seeing bobcats jumping over fences 6 feet tall, railings, and wooden posts. They jump over these obstacles whenever they sense the possibility of food on the other side, whether leftovers, pets, or small farm animals.

How Do Bobcats Jump To Escape Danger Or Protect Themselves?

Bobcats are experts at survival in different habitats. They can jump up to six feet into the safety of tree branches when a predator threatens them.

When a bobcat can’t get its way out of a fight, whether with a predator or with another bobcat, it will use whatever means are necessary to win, including jumping on its opponent.

What Kind Of Obstacles Do Bobcats Jump Over?

Bobcats are solitary animals that travel a regular route each evening between 2 to 7 miles (3 to 11 kilometers) long. They go out to hunt, stalk prey, and patrol their territory.

In their meanderings, it is not unusual for them to have to cross streams or rivers to get their fill. They are known to leap over narrow waterways, rocky slopes, snowy banks, and even across trees to get to their destination.

They have no fear of falling into the water mid-leap because they are good swimmers. They are also known to jump into the water, sometimes to hunt beavers.

Do Bobcats Hop When They Run?

Aside from their short tails and beautiful fur, bobcats have another distinguishing feature: their “bobbing” gait while running.

Because the species’ hind legs are longer than its front legs, they put both pairs of legs in the same place when moving quickly, making them appear to be hopping or bobbing. This gait is similar to that of rabbits.