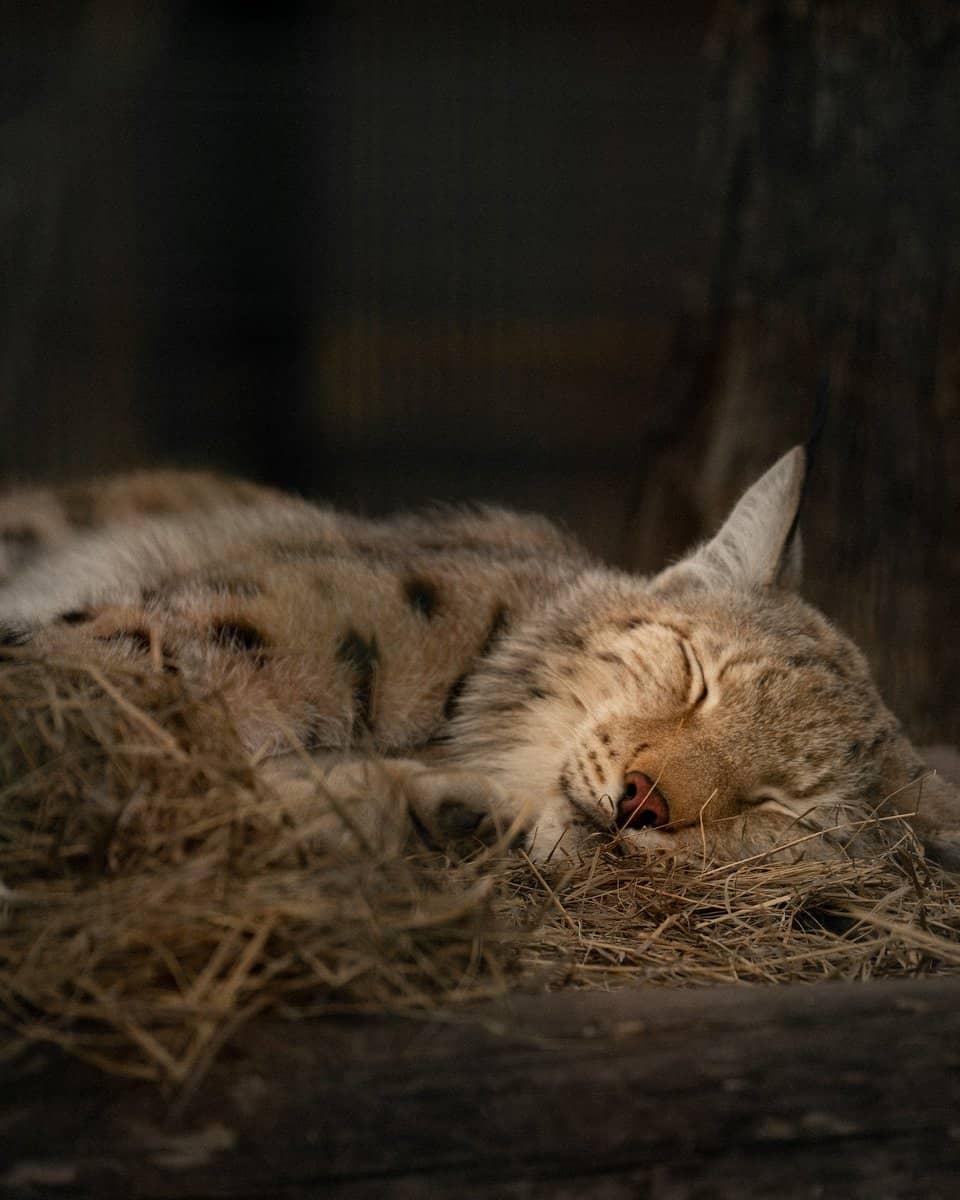 Bobcats are solitary and territorial animals that normally sleep alone in their dens, separate from others of their species. As resilient and adaptable creatures, they are able to align their sleeping patterns with their hunting strategies and the changing seasons, maximizing their survivability in harsh conditions.

But, like most cat species, bobcats highly value their sleep. In fact, sleeping appears to be among their favorite activities. How do they make the most out of it without jeopardizing their safety and need to hunt? Keep scrolling and learn all about their sleeping behavior!

How Much Do Bobcats Sleep?

Bobcats tend to sleep around 2-3 hours at a time, spread over a series of naps and light dozes. Their sleep cycles are broken up by hunting, periodic grooming, and patrols around their home range and territory.

Bobcat activity is usually highest three hours before sunset until midnight when they go to sleep, and peaks again one hour before and four hours after sunrise.

Do Bobcats Mostly Sleep During The Night or The Day?

Bobcats are considered to be nocturnal animals and are more likely to be found sleeping during daylight hours. However, they are remarkably adaptable creatures and can alter their sleeping patterns to a more crepuscular pattern in response to changing conditions during different times of the year. Winter, for instance, may find bobcats more active during the daytime.

Moreover, bobcat sleeping patterns may vary depending on when their prey is more active, and hares, rabbits, and other rodents tend to be active during the twilight of dawn and dusk.

Your chances of encountering a bobcat are relatively higher during the low-light periods of early morning and evening when they exhibit the most activity and lower during midday and midnight when they are resting or sleeping in their dens.

Just like a domestic tabby, bobcats love their cat naps! In fact, they would go through several short sleep cycles throughout the day and are only driven out of their slumber by sudden movements or sounds or when their hunger demands them to hunt.

Even on the prowl, bobcats tend to employ a more passive hunting strategy and are generally “sit-and-wait” predators. After selecting a spot with plentiful game, usually, somewhere near a swamp or thicket, they would crouch and wait in hunting beds or “lookouts” and spend long hours napping and dozing while watching for a possible meal.

Where Do Bobcats Sleep?

Bobcats sleep in their den. They occupy several den sites interspersed throughout their home range but have one primary den called the natal den. These locations offer great privacy and protection as they not only serve as resting and sleeping sites for bobcats but also where females would keep their vulnerable kittens.

If you ever find yourself near a possible bobcat den, do not expect a warm welcome as they are largely territorial creatures! You can usually identify these locations from the strong odor of urine and fecal deposits, evidence of a bobcat’s scent marking.

Where Do Bobcats Make Their Dens?

Bobcats are quite particular in selecting their den sites, requiring them to have dense cover, protection from harsh weather, and freedom from disturbances.

Generally, they prefer terrain that allows them to be out of sight, so they can sleep without worries of predators like cougars and coyotes.

Areas with thick vegetation and logged oaks, brushy fields, and bluffs are ideal for bobcat dens. Bobcats may also make their dens in caves, near ledges, and under rocky outcrops and often favor denning areas that have close access to water sources.

A female bobcat may also prepare a more elaborate den to ensure maximum protection of her kittens and would seek refuge in hollow logs, upturned roots of fallen trees, or rock shelters. She may increase the comfort of her den by adding mosses and dry leaves, so her bobkittens may sleep soundly!

Do Bobcats Dig Their Own Dens?

While bobcats may select underground dens in rocky terrains as their natal den, they do not dig them themselves and rely on other species that have abandoned their lodgings to make them. If this is unavailable, bobcats would opt to make their dens in thickets or rock piles instead of digging a burrow.

Do Bobcats Ever Sleep In Trees?

Yes, bobcats occasionally sleep in trees, especially ones they are familiar with, and can provide them with adequate cover and concealment.

They would, however, much rather sleep in their dens where they would feel safest but are not opposed to taking short naps in trees as the vertical cover provides them protection from extreme temperatures and wind and allows them to escape the notice of predators or unwanted attention.

If you catch sight of a bobcat napping on a tree, it is best to not disturb their peace as they likely want to be left alone!

Do Bobcats Sometimes Sleep In The Open?

No, bobcats already tend to skirt past open areas when roaming, sleeping without decent cover and protection is nearly unthinkable.

Furthermore, given bobcats’ tendency to snap awake over the slightest of sounds and movements and are immensely vigilant of any lurking predators in their vicinity, it is unlikely that they would get even a wink of sleep.

Even when dozing, bobcats’ keen senses are attuned to any shifts in their surroundings, assuming a semi-alert position with their whiskers spread wide and their ears erect. Open areas increase the disturbance of their sleep by triggering this acute sensitivity more frequently, making it an unsuitable location for resting.

Cover such as vegetation and hills and ridges is essential to a bobcat’s stealthy and solitary lifestyle, and as creatures who dwell in the shadows, they mostly stay within the safety of dense brush thickets or rocky formations whether stalking for prey or sleeping.

Do Bobcats Always Sleep In The Same Place?

Bobcats do not stick to a single den as they regularly roam in search of prey and to scent-mark their territories. They sleep in any of the auxiliary dens dotted across their home range, navigating through them in a zigzag course using travel routes.

A female bobcat with young kittens will sleep primarily in her natal den to keep watch over them but will eventually traverse to other dens with her kittens accompanying her on hunts.