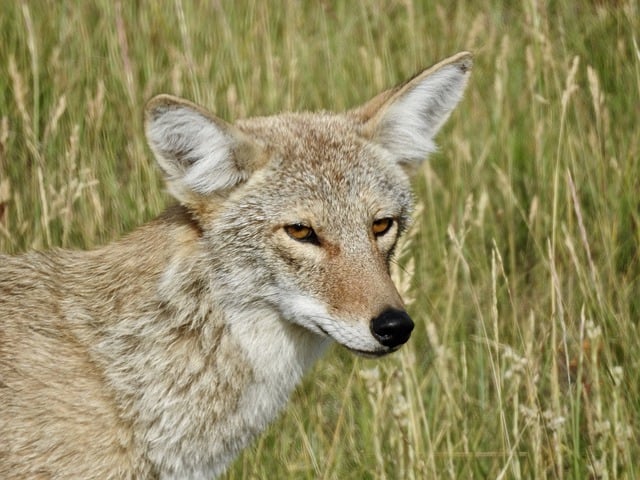 Coyotes do not possess the ability to hypnotize humans or any other species of animal, though they do have a whole host of unique skills to ensure their survival.

They are extremely resourceful. While a coyote can build a den from scratch, they will often take over the abandoned home of animals such as the badger.

A coyote can run at speeds of up to 69km per hour and jump distances of up to four meters! Furthering their athletic abilities, coyotes also have excellent swimming skills. Though they most commonly use this skill to escape from predators, a coyote will swim medium distances to find a new home or hunting ground.

Coyotes also possess some pretty incredible senses! While a human has around 5 million olfactory receptors in their nose, a coyote is estimated to have up to 300 million.

Will A Coyote Fake Injuries?

Selective limping is a behavior that has led observers to believe that coyotes fake their injuries. For example, you may witness a coyote limping around on an injured leg, but when prey comes into sight, the injury ‘vanishes,’ and the coyote regains full leg strength to pursue the creature.

While this may appear to be a faked injury, that’s not quite the whole story.

If a coyote is injured, they will do all they can to alleviate stress to that part of the body as it heals. Limping doesn’t mean that the coyote can’t use that body part (such as a leg) when needed. Coyotes aren’t ‘faking’ their injuries, but they are selecting when to put pressure onto an injured limb.

It’s an urban myth that coyotes lure dogs to hunt them, but what sparked this tall tale?

Quite simply, if you observe a dog with a coyote, you will see the dog chase the coyote only to find itself confronted by many other coyotes. Therefore, it often looks like the coyote has lured the dog into a trap.

Though it’s a convenient story our brains create to fill in the gaps, it does not represent the truth of what happens during a face-off between a coyote and a dog. To begin with, dogs love to chase coyotes. If a coyote is wandering around and spotted by a dog, the latter will chase the coyote for fun.

However, this is not so much fun for the coyote, and they will attempt to get rid of the dog by retreating to a hiding place or simply wearing it out.

Either way, coyotes are generally pack animals, so where there is one, you will often find more. And as the dog approaches, the coyotes will treat it like any other intruder to the pack.

If they perceive the chase as an attack, the coyotes will jump to the defense of their companion. These are behaviors designed to protect the pack, not to lure the dog.

The only time a coyote will lead an animal (including humans) is if they want to get them away from sensitive pupping areas. Again, they engage in this behavior to protect their own. Leading and luring are two separate behaviors.

Coyotes do not mimic humans, though they frequently yip, bark, and howl alongside their companions.

Coyotes would choose to avoid humans altogether if they could, but due to habitat displacement, they have to adapt to human and urbanized environments.

They share some similarities with humans in that they often live alone or in a mating pair; they can also co-habitat with the larger pack (or extended family). Additionally, they can adapt to almost any living environment, from the wild to urban areas.

Do Coyotes Tiptoe Around When They Need To Be Really Quiet?

Coyotes do walk on their tiptoes if they need to be quiet.

In areas where they’re taking particular care to go undetected, a coyote will walk on its toes to make as little noise as possible, in a process called digit-grading.

In several vertebrates, digit-grading or digitigrade locomotion is used to describe an animal walking or running on its toes. In doing this, they can move faster and more quietly than other animals.

Given the label of ‘wily’ by humans, coyotes are intelligent and versatile creatures though they do not possess the ability to read.

While characterized as cunning and sneaky, coyotes are just plain smart. As one of the most adaptable and skilled species in the animal kingdom, the coyote has managed to survive adverse conditions through its intelligence and resilience.

Where Do All Of These Questions Come From?

In one episode, we see Wile. E. Coyote is reading the book “Hypnotism For Beginners,” after which black rings emanate outwards from the pupils of his eyes.

Retrieving a pocket watch, Wile. E. Coyote then attempts to hypnotize the roadrunner. Though unsuccessful, the coyote himself becomes hypnotized as the roadrunner leads him to walk straight into a gorge.

This cartoon representation also mimics several elements of human behavior, such as knocking on a door and introducing himself to Bugs Bunny as “Wile E Coyote. Genius,” presenting Bugs Bunny with his business card.

Additionally, we often see Wile. E Coyote is drawing up plans and diagrams of how he will catch the creatures.

While these representations are not accurate to real-life coyotes, there are some similarities. Coyotes can not mimic humans, read or hypnotize you. But they are incredibly resourceful creatures that use an intelligent mind to thrive in a variety of environments.