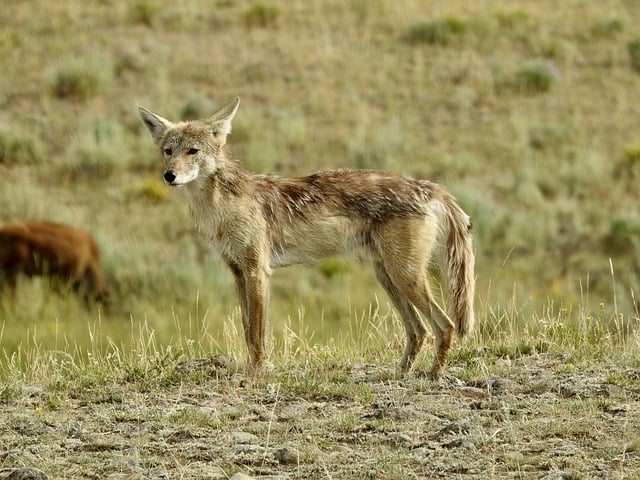 Despite its iron stomach, the coyote is prone to developing many types of disease. These common diseases include mange, rabies, distemper, and much more. The type of diseases that coyote get vary based on their diet and genetics.

Humans should never approach a wild coyote because you never know if they are carrying a disease. Never allow pets to approach coyotes either. Physically touching a coyote is enough to spread disease and cause a potentially dangerous outcome for your furry friend.

What Kind Of Diseases Do Coyotes Carry?

The possibility of developing a disease as a coyote varies depending on what they eat and their genetics. Living in the wilderness means that the coyote is prone to inheriting airborne diseases.

Can Coyotes Have Rabies?

It is not likely for a coyote to have rabies. However, coyotes can inherit this fatal illness if they ingest a piece of meat or carrion with the contagious disease inside it.

Coyotes are a mammal, and similar to any other mammal, they can develop rabies. Fortunately, few coyotes have rabies or, let alone, entire coyote packs. According to For Fox Sake Wildlife Rescue, coyotes do not live long enough after becoming infected to spread the disease.

What Percentage Of Coyotes Have Rabies?

The percentage of coyotes that have rabies varies for each state across the United States. The average is very low. For instance, according to the Atlanta Coyote Project, less than 0.01% of coyotes in Georgia are rabid. The numbers vary in each state, with some not offering any direct data.

How Do Coyotes Become Rabid?

The most common way a coyote becomes rabid is by being bit by other rabies-infected animals such as a raccoon, fox, or another coyote. Any animal with rabies is prone to infecting a coyote with rabies.

A coyote may also become rabid by sharing a food or water source with an animal infected with rabies. Typically, the disease does not last long airborne, but it can be transmitted through sneezes and saliva.

Are Coyote Pups Born With Rabies?

A coyote pup cannot be born with rabies. However, coyote pups can develop rabies by nursing on their mother’s disease-ridden milk.

Can Coyotes Be Cured Of Rabies? Is There A Vaccine?

Coyotes cannot be cured of rabies. However, there have been vaccines made for humans that make life safer around animals with rabies. According to the Humane Society, vaccinations have made it a point where there are now no more than two rabies-related human deaths per year.

How Do You Identify A Rabid Coyote? Do They Appear Or Act Differently?

Coyotes that are infected with rabies act completely differently than healthy coyotes do. Rabid coyotes will appear drunk, with foam around their mouths. It is typically difficult for rabid coyotes to stand, and they will be aggressive toward humans, which is uncommon for healthy coyotes.

Healthy coyotes are typically fearful of humans and will run away when they spot them.

What Are The Symptoms For Rabies In Coyotes?

Rabies has many physical identifiers that make it clear to distinguish a coyote is rabid, even from far away. Foaming at the mouth is the most common indicator that a coyote is rabid. Mouth foam is a very common sign of rabies that most mammals do.

Some of the most common symptoms that a coyote might have rabies include:

Can Coyotes Get Parvo?

Coyotes can become infected by parvovirus. Parvovirus is an illness that attacks cells of the intestinal tract. Unfortunately, there is no cure for parvo, and the survival rate for this contagious disease is very low. However, some coyotes survive longer than others, depending on their condition.

What Are The Symptoms For Parvo In Coyotes?

There are many common signs of parvo that directly point to an illness. According to Cornell University’s Cornell Wildlife Health Lab, the most common symptoms for parvo are lethargy, vomiting, and diarrhea.

Can Cats And Dogs Get Parvo From Coyotes?

Domestic cats and dogs can get parvo from coyotes if they are not vaccinated. It is spread when a dog or cat ingests the feces of an infected coyote. Eating the feces of other dogs is a common practice for domestic canines. If you notice your dog doing this in the wild, you should stop them immediately.

Do Coyotes Get Mange?

What Is Coyote Mange?

How Do Coyotes Get Mange?

Coyotes develop mange when a mite burrows under their skin and causes severe infection. The only time a coyote can get this disease is if they directly contact another coyote or fox who has mange. Any coyote that snuggles closely to another coyote with mange may also develop the disease.

Since mange is a dermatological disease, you or your pet must come in direct contact with a coyote to become infected with coyote mange. According to Urban Coyote Research, it is rare for the pathogen to spread to pets since coyotes and domestic animals rarely come into contact.

Is Mange Dangerous For The Coyote?

Mange is dangerous for coyotes because after they lose all of their hair, it exposes them to the elements. In any season, this leaves the coyote vulnerable to sunburns, hypothermia, and abrasions.

Do Coyotes Recover From Mange?

Do Coyotes Get Distemper?

According to the United States Department of Agriculture Wildlife Services, coyotes can get distemper. Distemper is a fatal illness. In addition to being fatal, this canine illness is highly contagious to domestic canines and raccoons.

When a coyote gets distemper, they are unlikely to survive given they will not receive medical attention.

What Is Coyote Distemper?

According to the VCA Animal Hospital, distemper is an incurable and fatal disease in dogs that affects the respiratory, gastrointestinal, and central nervous systems. Distemper is very contagious and can be transmitted between several animals, including coyotes and domestic dogs.

Distemper is typically spread through direct contact, either between wild canines or other wild mammals. Coyotes can get distemper by ingesting water covered in an infected coyote’s saliva or by being nearby when an infected coyote sneezes.

What Are The Symptoms Of Distemper In Coyotes?

Since it is a viral infection, there is no treatment, and the disease is considered incurable. Unfortunately, most coyotes do not receive the medical attention required to mediate symptoms.

Do Coyotes Get Heartworm?

As a mammal, coyotes can get heartworms. Coyotes are canines, and they often get heartworms by eating rotted foods already infected with heartworms, which is one of their favorite meals.

Mosquitos transmit heartworms between other coyotes to spread the contagious disease.

What Are The Symptoms Of Heartworm?

According to the Heart Worm Society, the symptoms of heartworm progress as the coyote worsens. The coyote begins with basic signs of illness such as lethargy, weight loss, and fatigue. Then, coyotes will start to experience more serious symptoms like heart and organ failure. Finally, they undergo cardiovascular collapse and, unfortunately, perish.

Heartworms can last inside canines like coyotes between five and seven years.