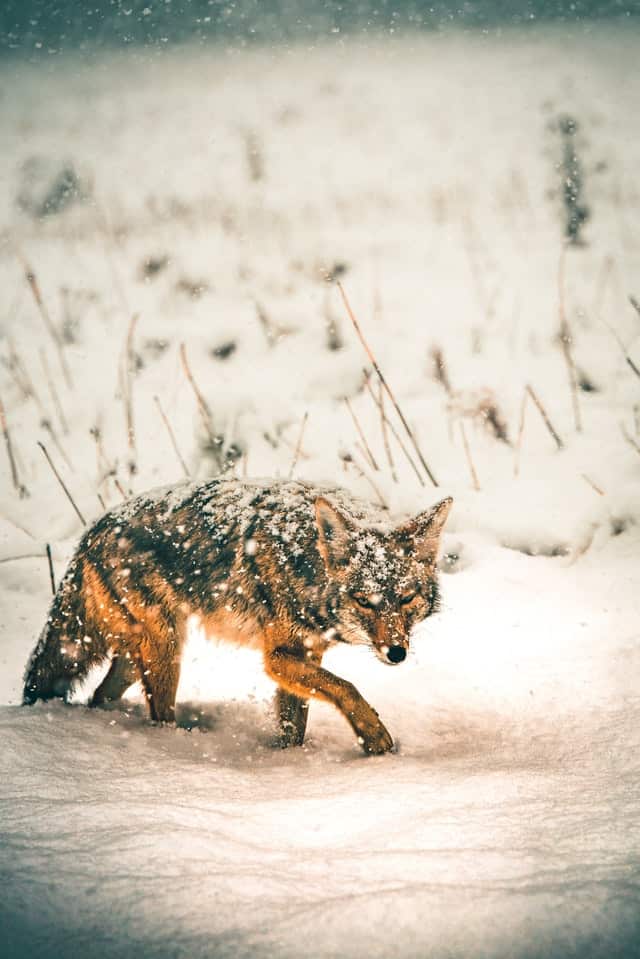 Coyotes are timid animals, and chances are, you will never get to feel the fur of one for yourself. That does not mean it is not interesting to know what it would feel like to touch coyote fur.

A coyote’s fur has different textures depending on the area of their body that you are touching them. The underbelly of the coyote and the chest are soft, and the back, legs, and head are coarse.

In any case, coyotes’ fur is highly cherished because of its soft texture and blended tint. Coyote fur can be used in the fashion industry and sold for a high value on the fashion market. Many animal lovers consider this inhumane, but selling coyote pelts is actually legal if you have a license.

Thickness is a major factor in the softness of coyote fur. Coyote fur is at its thickest during winter, and during spring, a coyote sheds its soft fur only the coarser fur remains.

In some places, a coyote’s fur will become increasingly soft because of a need for insulation and seasonal changes.

Shortening sunlight causes photoperiodism, which is the hair’s reaction to the amount of daylight canine breeds receive within 24 hours. This can affect the color of the coyote’s fur.

The coyote’s fur grows the most during winter when the coyote needs more insulation. This insulation winter fur is the softest.

The fur on a coyote’s underbelly is soft with a thin outer layer of coarser fur and made to protect the inner, softer layer from snow.

The inner layer of fur is protected from snow by a rough, moisture-dispelling outer layer of fur. The thin outer furs are called guard hairs.

Guard hairs are coarser than other hair and are grown to protect pelage from moisture. This part of coyote fur is rough but is necessary for protecting the underfur from moisture and cold.

What’s The Difference Between A Coyote’s Winter And Summer Coat?

The summer coats and winter coats of coyotes differ mainly in length. During summer, a coyote’s coat is shorter than it is during winter.

Coyotes require insulation during winter, and therefore, they grow underfur.

During the winter, coyotes have something called underfur. The underfur is an extended amount of fur on their belly, which protects them from cold weather.

Coyotes go through one major molt between spring and autumn to rid themselves of coats during winter. It is easy to mistake grown adults for pups during this time of year because of the major decrease in size. (Or, at least, they seem smaller, but most of the decreased size is actually just fluff.)

It is normal for the coat of a coyote to shed because of the coyotes’ photoperiodism reaction to changing weather.

As the coyote slowly sheds its winter coat, markings become less visible until finally disappearing altogether. When the coat is gone, the coyote’s fur will appear uniform in color.

Do Coyotes Sometimes Lose Their Fur On Their Body Or Tail?

Coyotes can lose fur on their bodies and tail. Coyotes will shed their fur at the beginning of every spring. Abnormal, excessive shedding is uncommon and may result from a food allergy or worse medical illness.

An inadequate diet is a common reason for losing fur on parts of their body. When a coyote does not get adequate protein or eats something they are allergic to, they are likely to experience symptoms of food allergy.

Coyotes may have hair loss because of possible illness. A coyote is not always dangerous, but hair loss may indicate something is medically wrong with the coyote, like rabies, which means that you should be very cautious and avoid the animal if it comes close.

When Do Coyotes Get Their Winter Coat?

Coyotes get their winter coat at the end of fall around November. The weather is still cool enough during the end of autumn, so growing hair would not create overheating. Coyotes’ coats are fully grown and ready for winter by the end of fall.

The harsher the weather conditions, the more fur they grow. So, people who experience snowy weather will notice that local coyotes grow more underfur to keep them warm and more guard hairs to keep them dry.

What Colors Can Coyotes Be?

Coyotes can have coats of a variety of fur colors. The most common coat colors are a combination of pale gray and sandy brown with a white chest.

Coyote fur can come in various other colors, including tan, brown, gray, and red. It is rare to find any coyotes that have black fur.

It is common to see a darkened tip at the end of a coyote’s tail. A common folktale involved with this physical attribute is called the coyote fire legend, which claims that the mark on the coyote’s tail is a burn from a fire monster.

The wicked fire monster attempted to stop the coyote from taking fire to help the Native American people. Luckily, the coyote got away but not without a darkened band at the bottom of its tail.

Coyote fur can change color through the seasons as fur grows. When coyote fur is short, it appears brushed together. When the coyote is fully grown, the coyote’s markings will be more clearly visible.

The most common colors include tan and brown. As the coyote grows older, their fur may lighten because of age and adapting to their conditions.

A coyote’s fur helps them stay dry by growing an additional layer of fur called guard hairs. Guard hairs function with the intent to protect a coyote from wet weather.

Coyotes also develop underfur on their bellies. Underfur is a kind of guard hair that grows during winter to keep a coyote’s belly dry during winter.

How Warm Is Coyote Fur?

People who use coyote fur for fashion know that it is one of the warmest furs.

Are Coyote Pelts Used For Clothing Or Other Products?

Is It Legal To Sell Coyote Pelts and Fur?

Selling pelts and fur is not illegal, but you are required to purchase a license for trapping and furring animals like coyotes. Anyone interested in selling coyote pelts (or any other pelts) must have a license. All pelts sold must be from a classified furbearer.

Are Coyote Furs Worth Anything?

Coyote furs are worth different amounts based on the different species. The price of coyote pelts has continued to fluctuate over the years. Raw pelts sell for amounts ranging from the low twenties to the high eighties.

In general, fur prices are down because of the rise in the vegan and anti-fur movements. However, coyote fur is still on the market. The condition of the coyote fur impacts the value monumentally.