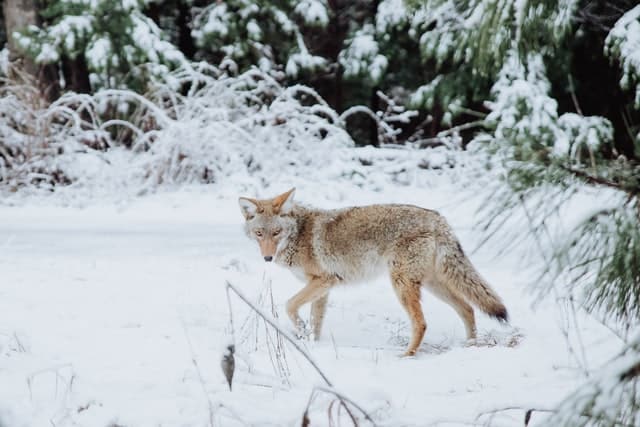 Unlike many other mammals, coyotes do not hibernate during the winter. Coyotes do not migrate during winter either. These canines are active animals who hunt for food year-round.

In addition to being adaptive to their environment, coyotes’ fur helps them withstand even the most brutally cold temperatures. These animals are intelligent and use their perceptive abilities to find shelter when needed. However, cold temperature is not a concern for coyotes.

Do Coyotes Hibernate Or Migrate In The Winter?

The adaptive and resilient canine has learned how to withstand even the harshest winter conditions without the need to hibernate or migrate elsewhere. Coyotes stay within the bounds of their territory throughout winter.

Coyotes often move throughout winter, changing their den locations frequently. This is common coyote behavior. However, during winter, this behavior is heightened exponentially.

What Do Coyotes Do In The Winter?

Generally, during winter, coyotes will continue their routine as normal. They sleep mostly throughout the day and hunt during the night.

The main difference between their routine during winter and other times of the year is their accessibility to food. Coyotes still hunt during winter. However, the amount of food accessible significantly decreases.

Overall, winter is an important time of year for the coyote because it is mating season. They also engage in several other activities like establishing new territory, traveling, and den-building throughout the wintertime.

Winter does not result in much behavior difference from coyotes, aside from altered hunting habits. Much of the wildlife these coyotes typically hunt, like deer, turkey, and rabbits, have nested away for winter.

These wild canines are experts in adapting, so they have no problem adjusting their eating habits to accommodate the lack of wildlife. The carnivorous coyote resorts to a mostly vegetarian diet of berries and other vegetation during winter.

The coyote’s mating season lasts from January through March. During the winter, coyotes are actively seeking mates and working on expanding their pack. The alpha male and alpha female of each pack will mate, if necessary.

Mating season is also the time of year when betas break away from the pack to find territory for themselves. Establishing personal territory is the beginning of their first mating season. After establishing territory, they will begin to call for eligible bachelors or bachelorettes.

In preparation for the pups in spring, coyotes will build multiple dens all across their territory. These dens will be used for the first few months of the pups’ lives and are integral to their survival.

Additionally, these dens help coyotes escape dangerous weather conditions. They may also be a part of the coyotes’ ability to evade large predators.

As one of the only animals still roaming around during winter, coyotes are vulnerable to large predators like wolves and mountain lions. The constant danger of large, hungry predators means that coyotes must constantly be aware of their surroundings.

Coyotes tend to be non-confrontational. So, instead of combatting large predators, they will avoid the predators. When they cannot avoid them, alpha males will use trickery or sacrifice themselves to lure large predators away from the den. Sacrifices that some coyotes make are the most unfortunate costs of living as a coyote during wintertime.

Hibernation is not necessary for coyotes, who are active during all times of the year. Coyotes are adapted to withstand cold conditions. Their thick, water-repellant fur helps them stay warm and dry during the cold winter months. The water retardant nature of the coyote’s fur also assists them in staying dry in snowy areas. Staying dry is very important to coyotes because of their sleeping preferences during winter.

Another reason that coyotes do not hibernate is their need for sustenance. Coyotes are great at holding onto reserves. They can go several days without consuming proteins, and their diet is mainly vegetarian through winter. They are not capable of placing themselves in a state of hibernation.

Do Coyotes Migrate To Warmer Places In Winter?

Coyotes are capable of withstanding cold temperatures, so there is no need for them to go elsewhere. When they are uncomfortable with their environment, coyotes are intelligent enough to seek shelter underneath things like fallen and canopied trees. They also know how to dig or steal dens.