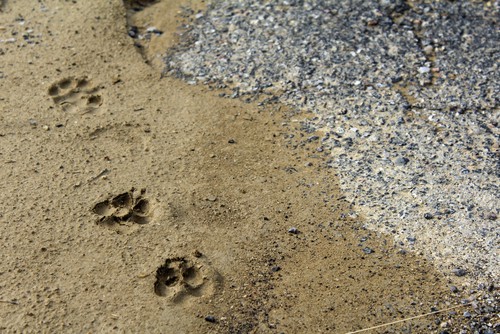 Coyotes use their paws in every aspect of their daily life. From traveling across different types of terrain to hunting and foraging food, coyotes rely on their paws to help them survive.

A coyote’s paw prints are relatively easy to identify once you know how to tell the difference between different canine species. Although coyote paw prints appear similar to domestic dogs and wild canines like the gray wolf, they are distinguishable by various features like the size and shape of their paw pads and toes.

Coyotes are digitigrades, meaning they walk on their toes. Walking on their toes gives coyotes the advantage of agility and stealthiness. Coyotes are quiet, swift, and speedy walkers. Because the coyote walks on its toes, they do not leave much of a print on the ground.

Coyote paws are very similar to wild canine paws like the gray wolf. They are small, with four toes and a triangular-shaped paw pad. The top of their paw is covered in fur, with webs between each toe that help them swim and stabilize themselves on uneven terrain.

The wild canine also has sharp claws to help them with various survival needs. These paws leave prints in the ground that are easy to identify, mainly based on the shape of their toes.

How Big Are Coyote Paws?

What Do Coyotes Use Their Paws For?

Paws are one of the most important things for a coyote because they help carry out some of their most basic tasks, such as digging, running, and foraging. Coyotes use their paws for running, hunting, swimming, foraging, digging, and much more.

Coyotes avidly use their paws for hunting other animals. Their sharp claws and thick paws make it easy to capture prey. Coyotes will also use their paws to assist them in ripping foraging berries, vegetables, and other natural foods.

Are Coyote Paws Good For Running In Snow?

A coyote’s paw pads have plenty of traction, which means they are great for running in the snow. In addition to their paw pads, coyotes also have dewclaws which help them stabilize themselves on slippery ice.

The medium-sized coyote has an easy time adapting to trying situations. This is in part because of their reliable paws.

What Do Coyote Tracks Look Like? How To Tell The Difference From Dog, Wolf, Or Fox Paw Prints?

The coyote’s footprint strongly resembles the domestic canine and gray wold. Coyotes have triangular paw pads with visible claw markings. The main way to tell the difference between the coyote and other canines is by looking at the toe shape.

You can identify the paw prints of a coyote by their long, ovular-shaped toes. Coyote toes are tightly compact, with very little space between its toes and paw pad.

Another thing to notice is that coyotes put one foot in front of the other when they run, so their paw prints will appear as a straight line.

Are Coyote Paws A Lot Different From Dog Paws?

Overall, coyote paws are not very different than dog paws. Both canines use their paws for the same purpose, which is why their paws look so similar.

There are a few key differences between coyote paws and dog paws, including shape, size, and toe gap. The way coyotes walk on their paws is also a major difference between this wild canine and the domestic dog.

Why Do Coyotes Sometimes Bite Their Own Paws?

Biting their paws is a normal part of a coyote’s cleaning process. Coyotes may bite the interior of their paw pads to remove dirt or debris. It is also common for coyotes to remove splinters and other annoying items from their paws by pulling them out with their teeth.

Do Coyotes Have Claws?

Coyotes have sharp claws that help them survive in the wild. They use their claws to dig burrows, hunt, and stabilize themselves. The coyote’s sharp claws also help it gain traction to jump high.

How Long Are Coyote Claws? How Many Claws Does A Coyote Have?

Coyotes have four claws on each paw. They are roughly half an inch long each. They use these sharp claws to dig, hunt, and much more.

The coyote also has a dewclaw. This claw is an additional claw located on the interior of the coyote’s arm. The dewclaw is significantly shorter than the other claws, at roughly a quarter-inch long. The reason dewclaws are shorter is because coyotes do not use their dewclaws as frequently as the other claws.

Do Coyotes Have A Dew Claw Like Dogs Do?

Coyotes have a dewclaw, similar to domestic dogs. A dew claw is an incomplete fifth toe that is present on the side of their inner foot. In comparison to humans, these claws are considered thumbs.

Although dew claws do not always come in contact with the ground, these are important for providing extra traction. Additional traction becomes important when coyotes run on slippery surfaces like ice or moss-covered rocks.

Are Coyote Claws Sharp? Do They Use Them For Fighting?

Coyote claws are very sharp and are often one of their main forms of defense. They use their claws to fight against large predators and trap prey.

In addition to their claws, coyotes use their sharp teeth in fights.