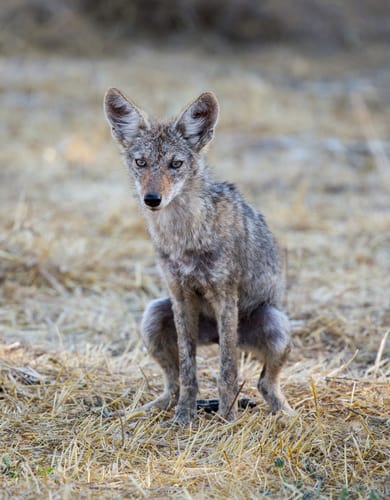 Coyotes’ bathroom routines are some of the most unique in the canine kingdom. Like many other canines, they use urination and defecation to mark their territory.

The clever coyote establishes a bathroom area and will poop in the same place every time. Whether they are pooping on cross paths or in your backyard, coyotes likely intend to defend.

Identify coyote scat by its tubular shape and variance of colors anywhere from purple to green. Coyote scat is often full of seeds during summer and fur during winter months.

Where Do Coyotes Poop?

Coyotes often find a spot and designate it to be their bathroom area. They will continue to poop in this area until they move den locations.

Territorial pooping is another common pooping strategy utilized by coyotes. Coyotes will frequently poop on trails to mark their presence in the area.

Pooping is one way that coyotes maintain the borders of their territory. As other coyotes and large animals pass, the poop along territory lines marks the coyotes’ ownership and deters them from settling in the area.

Do Coyotes Poop In The Same Spot?

Coyotes frequently poop in the same location by choosing a spot they feel comfortable and returning to it every time.

Pooping far from their den keeps their territory clean. It also defends them against predators because of the overwhelming territorial smell. A concentrated area has an increased stench. The overwhelming stench deters any predator from trying to approach.

Coyotes utilize this tactic wisely, especially in small groups where they pair to defecate in the same area. Concentrated defecation can make a pair of two coyotes seem like a pack of a dozen.

Why Do Coyotes Poop In My Yard or Near My House?

How Do Coyotes Poop?

Coyotes poop similarly to dogs by squatting and then defecating. After pooping, coyotes do not cover their scat. The lack of conservatism is a key difference between the domesticated dog and wild canine.

How Do Coyotes Urinate?

The urination patterns of coyotes vary. Adult males, for instance, use raised-leg urination, while female coyotes use squatting postures. Juveniles will squat until they learn otherwise.

Do Coyotes Eat Poop? Like Deer or Dog Poop?

Coyotes might not eat poop, but they may be attracted to the smell of dog poop.

Coyotes fart, believe it or not! In fact, all canines fart.

What Does Coyote Poop Look Like? How Can You Identify It?

Coyote poop resembles dog droppings. It is typically long and tubular, at less than one inch in diameter. You can identify coyote poop based on what is inside the poop.

Is Coyote Poop Big or Small?

Compared to other animals, coyotes poop are relatively medium in size. At less than one inch in diameter, coyote poop is thin, but it is long.

Coyote poop is tubular and also similar to the shape of dog poop. It may taper at the end and have a similar appearance to fox poop.

Coyote pop is typically brownish-green but can come in all colors depending on what the coyote has eaten. A coyote’s diet significantly impacts the color, consistency, and overall appearance of their poop.

Greenish colors indicate that a coyote has a high-vegetation diet. Coyotes have a highly herbivorous diet, so most of their diet is plant matter with the occasional serving of meat.

As the coyote’s diet becomes more vegan during summer, their poop will likely be purple-ish and full of seeds. Seeds and shell casings indicate the coyote’s diet consists of nuts and berries. A coyote with this diet is likely small and might not be at the top of the food chain in their area.

The presence of hairs and bones in coyote droppings indicates that the coyote is carnivorous. Accessible meat indicates the coyote may be at the top of the food chain. It is also more common to see more furs and bones during winter when more small critters become available.

Why Does Coyote Poop Turn White or Other Colors?

Coyote poop may change in color over time for numerous reasons.

A common reason that coyote scat changes color is aging. Scat begins to turn white within a few days after the coyote has pooped. White poop indicates that it is at least a few days old and is in the decomposition stage.

Scat may also gray or bleach when there is natural bleaching from the sun. No matter the initial color of the coyote scat, bleaching can cause discoloration.

How Stinky Is Coyote Poop?

The stench of coyote poop will vary based on what the coyote has eaten. Diet is a major influence on how stinky coyote poop is.

A strict vegan diet will lead a coyote to become a less stinky diet. A more vegetable-filled diet leads to a less stinky poop! Depending on a coyote’s diet, a coyote’s poop will have a different stench.

Can It Have Seeds, Berries, or Hair In It?

It is common for coyote poop to have seeds, berries, and hair in it. Coyotes often have different things in their poop, depending on their diet.

The season can also impact what appears in a coyote’s poop because of food accessibility. Different foods become more and more common during some seasons. During summer, berries are more accessible, and fur is not present.

Could It Be Fox, Dog, Cougar, Bobcat, Raccoon, Cat, Bear, or Wolf Poop?

Coyote poop is very similar to dog poop in shape and size. A few key indicators make the two different, like finding berries, fur, and more inside the feces. These things are obvious signs of coyote droppings.

Similarly, there are also many differences between the poop of coyotes and the animal droppings of raccoons, bobcats, bears, and more.

Here are a few ways to tell if the scat you see belongs to a coyote:

During winter, there will be very few berries in a coyote’s poop because of the lack of vegetation availability during the winter months. Poop will have less hair during summer.

What Is Coyote Poop Called?

Scientifically, coyote poop is called scat. Scat is the general term used in the scientific community to refer to all canine poop. The term scat also refers to a variety of other animals like felines, deer, and more.

Feces is another term for coyote poop frequently used by academics.

According to scientists and scholars, scat provides helpful insight into the coyote diet. Without the study of coyote scat, there would be minimal understanding of coyotes as predators.

Coyote poop is very dangerous because of the bacteria, viruses, and deadly pathogens it carries. Ingesting or touching coyote poop can be life-threatening. Always leave the handling coyote scat to professionals.

Many highly contagious diseases exist inside coyote poop, including tapeworms and tapeworm eggs.

Do Dogs Get Sick From Coyote Poop?

Dogs can get seriously ill from coyote poop. There are many diseases inside coyote poop that are dangerous for dogs.

Avoid letting your dog sniff around piles of coyote poop at all costs.

Are Dogs and Coyotes Attracted to Each Other’s Poop?

Dogs and coyotes are attracted to each other’s poop. As a dog owner, you should always keep your pet away from coyote poop.

Coyote poop can be disease-ridden and may infect your dog simply by them smelling it. To stay safe, always keep your dog on a leash that you can control easily. If you are in control, you can keep your dog from putting itself in harmful situations.

If a coyote has been pooping in your backyard, there are many humane methods available, too. Humane mitigation methods can help adjust the territorial coyote’s behavior, so you can prevent the canine curiosity from causing serious damage.