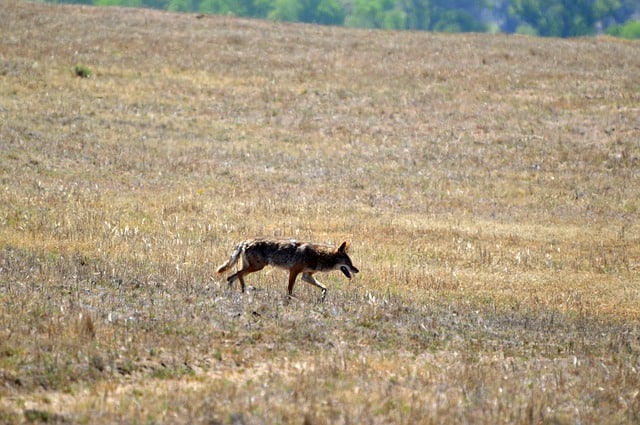 The coyote is an opportunistic hunter with an expansive diet that includes animals of all sizes. Most commonly, coyotes eat small mammals, house pets, and small livestock. Coyotes consume protein based on opportunity and stop hunting once they have had enough food. Depending on the number of coyotes hunting together, coyotes may try to hunt larger animals like deer, cattle, and mules.

What Animals Do Coyotes Hunt?

Generally, a coyote will eat almost any animal that they find. These opportunistic eaters work independently or as a pack to hunt all kinds of animals.

Small critters like rabbits, rats, and snakes are some of the most common animals that coyotes hunt. But, the coyote’s diet is not limited to small animals. Coyotes will group in large numbers to hunt large prey like deer, goats, cattle, and other large animals.

The opportunistic hunter adjusts their hunting strategy based on the number of coyotes hunting at that time, the size of their prey, and their hunting conditions. These wild canines are highly intelligent and strategic.

There are several reasons why livestock and farm animals are common prey for coyotes, like their defenselessness and the ease of accessibility.  Unfortunately, the inability to defend themselves makes livestock perfect targets.

Farmers keep pigs, goats, and chickens in cages, which makes escaping impossible. In the wild, packs must work together to corral large animals. But livestock is corralled for coyotes already.

Few farm animals have a genuine way of defending themselves against predators. In most cases, these animals attempt to work together. However, most farm animals, like chickens and pigs, have no defense mechanism against coyotes.

Livestock like cattle, donkeys, and sheep have hooves that they will use to stomp. They may also head-butt and buck at coyotes. These are minimal defense efforts against a pack of two to six coyotes.

Cattle, calves, and mules are common prey for coyotes hunting in packs or groups. Although coyotes typically hunt in isolation, grouping together helps them take down larger predators.

Hunting large prey is difficult when coyotes hunt alone because of their small size. Alone, coyotes are only a fraction of these animals’ sizes. Together, coyotes use their combined weight to overpower larger prey.

The opportunistic coyote loves to eat medium-sized farm animals like sheep and goats. Unlike small animals, ungulates like alpacas, llamas, and goats can be difficult to corral. Farmers do not keep them in small enclosures, even at night. Plus, their hooved feet make good defense mechanisms.

Coyotes will work together in packs to take down ungulates. Their adaptive techniques come in handy to evade the hooved counterattacks and hunt the animals.

Do Coyotes Hunt Your Poultry (Chickens, Ducks, Turkeys, Or Geese?)

Coyotes are eager to eat poultry like chicken, ducks, and other poultry.

These animals are easy to hunt because of their small size and inability to defend themselves. In addition, poultry is an easy target because of how insecure the coops are. Coyotes often sneak in and out of the chicken wire before farmers know what has happened.

In addition to eating a farmer’s poultry, coyotes may also eat unguarded eggs. So, even if all the birds fled to the corner, coyotes can still get a meal from the nest.

Unfortunately, it is common for coyotes to hunt dogs, cats, and other housepets. They mistake these pets for prey because their size is similar to their normal prey. For instance, cats and small dogs have a similar size to many of the animals that are common on the coyote’s menu.

Coyotes have no intention of hunting pets. When homeowners leave their pets outside in rural environments or let them roam freely, coyotes easily mistake them for prey. By expanding onto their territory, we are endangering ourselves and our pets.

Wildlife is the most common part of a coyote’s diet. The type of wildlife that the coyote eats varies, from birds and rodents to various marsupials. Coyotes also hunt large game. However, the size of their prey influences the number of coyotes hunting together.

The strategic coyote is capable of hunting large prey like elk and mooses. But, to be successful in their attempts, they must work in groups. Although coyotes prefer to hunt alone, they use strategic group-hunting tactics to take down big game.

Hunting big game animals is possible for coyotes. However, they are not always successful. Hunting bigger game animals like elk and moose can be complicated for coyotes because they weigh significantly less and find it difficult to overpower the big game.

Working in packs can make hunting large animals like deer, javelinas, bison, elk, and moose possible. These animals are more capable of defending themselves but working in groups helps weigh them down. With more weight on top of these large animals, it makes running away and combatting the coyotes impossible.

Coyotes steer clear of large predators, like black bears, mountain lions, and wolves. These carnivorous mammals seek out the small coyotes as a food source.

These canines will establish territory far away from these predators. They may even migrate elsewhere if they notice large predator populations increasing in the surrounding area. This adaptive behavior saves their population in the long run.

Marsupials and mustelids make up a generous portion of the coyote’s diet. These two families include badgers, skunks, opossums, and many other small animals. These are easy prey because of their inability to defend themselves.

Many of these marsupials and mustelids dwell underground, in trees and the rivers. Coyotes are opportunistic and do not actively seek out prey.

Generally, if coyotes do not encounter these animals, they will not actively hunt them. Fortunately, many of these small marsupials and mustelids (e.g., opossums and raccoons) are nocturnal, which fit the coyote’s opportunistic hunting style.

Rodents and lagomorphs, like rabbits, rats, and squirrels, are common protein sources for coyotes. Since these small animals are awake during the day, they make great snacks midday.

The size of these mammals makes them easy to hunt. However, they are not as filling as large prey. Still, as a lone hunter, the coyote prefers hunting several small mammals in one night alone instead of one large animal as a pack.

Small birds make great protein for coyotes. However, they can be difficult to hunt if the coyotes do not injure their wings immediately. Coyotes are strategic hunters and are usually successful in hunting non-flying birds like wild turkeys.

Large birds can be problematic for the coyote. Raptors like eagles, hawks, and owls are unafraid of attacking coyotes with their talons. Furthermore, these predatory birds are fully capable of capturing and hunting newborn pups.

Do Coyotes Hunt Turtles and Tortoises?

Because of their hard shells, coyotes are not always successful in their hunting attempts. Instead, coyotes will eat the carcasses of turtles and tortoises after they wash ashore. Carrion is a normal part of the coyote’s diet.

Do Coyotes Hunt Fish, Crayfish, Frogs, And Other Water Animals?

Water-dwelling creatures are difficult for land-dwelling animals like the coyote to hunt. If a coyote stumbles across a frog on land, they will use the opportunity to hunt them. However, coyotes do not usually hunt for food in the water unless they are readily available.