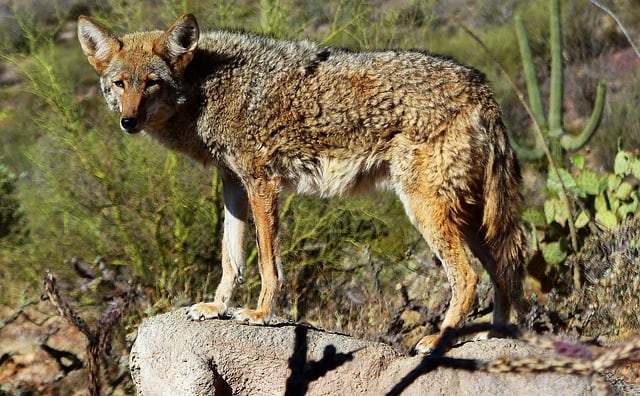 When many folks think of coyotes they instantly think of the moon and rightfully so! Coyotes are known for howling at the moon, but did you know coyotes and the sounds they make are not just limited to howling? There is an abundance of communication methods coyotes use to get their point across in the night and day!

The surprisingly urban coyote uses howling, yipping, and woman-like screaming to communicate with other members of their pack. Although they are most active at night (which is when you typically hear howls), coyotes are active at all hours and are unafraid to roam city streets!

You can determine a lot about a coyote’s intention just by listening to their howl. Environmentalists even believe these canines are so adaptable, that they take on more than just personalities –they take on accents!

What Sounds Do Coyotes Make?

Coyotes are known for their wide array of noises and nightly howling. In fact, these night-stalkers are so noisy, they are called the ‘song dog’ by many folks in the wildlife community!

Whether they are grouped in a choir under the moon or trotting along by themselves, these calculating canines are always singing a tune! The sounds are all different too and coyotes are often adapting to the noises around them!

From realistic screams to dog-like whimpers, the coyote is one of the most acclimated animals that are not domesticated.

Howling is the most common form of communication for an adult coyote, and it is the most frequently heard noise from wildlife observers and homeowners. A coyote’s howl is loud, especially when they do it in packs, and it can be heard for miles!

Many people assume howling means something bad but, really, it is just a coyote’s way of communicating! The high-pitched howl you hear in the middle of the night is a coyote’s most basic form of communication and it has multiple meanings, too.

Howling can also help a pack of coyotes establish new territory! This is their way of asserting dominance over any existing coyotes in the area!

Coyotes like to hunt alone, so they break into smaller groups and howl to coordinate with others!

A loud, penetrating drone guarantees that a coyote discloses their location to the rest of the pack and reunites easily which is why you will hear coyotes use their siren-like howl in the middle of every night to round their rowdy packs in!

Typically, howling starts around dusk and will carry until the end of the night when the pack leader calls the pack back together, but you may occasionally hear a coyote howling during the day. There are many other reasons that coyotes howl too like heightened curiosity and asserting dominance.

For instance, when a pack settles in a new area, they will likely howl to declare their territory. This does not mean that these wild animals have done any malicious to hurt your wildlife. It simply means that you have some new neighbors in your local community!

Coyote pups typically communicate through whines until they can develop strong enough vocal cords to join in with their pack’s howls. Parents use special woof sounds to command them to and from their dens.

How Far Away Can You Hear a Coyote Howl?

Coyote howls are loud which means they can be heard from almost half a mile away. Wildlife experts insist since coyotes like to howl altogether in their pack, they often appear to be in larger groups than they are.

Furthermore, they are much further away than they seem. So, if it sounds like they are in your backyard they probably are not. However, always proceed with caution and remember that these animals are surprisingly urban and are not afraid to roam right through your backyard!

What to Do if A Coyote Howls at You

If you hear a coyote howling at you, remember that coyotes are afraid of humans so you should stay calm and get ready to start hazing them which is a safe method that will deter the coyote from continuing howling or perhaps even coming into the area altogether.

Tactics for Hazing a Coyote Are:

In the case of a coyote confrontation, it is best to stay calm and never turn your back on the coyote. Howling is not a sole act of aggression but remember that the presence of a coyote means that wildlife is in danger. Act smart and check that all pets or livestock are secured so they do not get eaten!

A coyote must always communicate with their pack which is why they howl as they hunt! There are a few times each day –and per year- when howling becomes especially helpful to the coyotes.

Coyotes stick to a schedule which means they will typically howl at the same time every night such as at dusk, when they are about to hunt, and around midnight when they have just finished their hunt. They also have howling tendencies around coyote mating season and become more active overall during the winter!

Dusk is when coyotes become especially active so do not be surprised if you hear yips and howls of coyotes outside as the sun begins to set. Even though it will often sound like there are hundreds of coyotes right in your backyard, the real measurements would be more like a quarter of that amount and twice that distance away!

Dog owners beware of this nightly alarm and know that walking your dog around dusk can be dangerous since the chances of encountering a coyote are heightened. Dogs are very vulnerable to coyotes around dusk, especially if they are not reined in on their leash.

If you must take your dog on a walk around dusk, you should always bring a noisemaker with you. Coyotes are native to 49 states, and they are very urban animals too which means they will be unafraid of approaching you and your dog!

Coyotes howl at the moon when they are done hunting for the night and ready to bring their pack together. As a part of their evening routine, coyote packs come together and ‘sing’ in celebration of their individual hunts!

This celebration would not be complete without howling at the moon and group serenading. These howls and yips can often sound like laughs if you listen close enough!

Howling Because of Mating Season

During mating season, between January and March, hearing an excessive amount of howling at night is not uncommon. This is because coyote bachelors and bachelorettes are seeking out other single coyotes to start their families with!

Howling During the Winter

Winter is surprisingly the most active time of the year for coyotes which means the likelihood of hearing their interesting vocalizations are heightened!

At night, you will undoubtedly hear howling.

Yipping is another form of vocal communication that coyotes use to express more distressing emotions. It sounds like a high-intensity whine and can be concerning to dog-owners who commonly associate it with a dog’s yelp!

When coyotes feel threatened, they will growl to warn the other animals around them that they are willing to fight to defend their territory. Growling is the coyote’s defense mechanism, and it warns other animals to back away from the coyote before it attacks them.

What to Do if A Coyote Growls at You

If a coyote is growling at you, this is a sign that they feel threatened. The best thing you can do in this situation is to try hazing the coyote or getting yourself somewhere safe without turning your back to the coyote.

Proper hazing techniques can include making excessive noise as well as making yourself appear large. No matter what you do, keep your attention on the coyote and do not leave yourself vulnerable at any point. If a coyote is growling that means they are ready to defend themselves and fight.

Coyotes make plenty of strange noises like laughs, grumbles, and even dog-like whines which is mainly because of their close resemblance to the domestic dog! Because of their strange laundry list of noises, coyotes have been given.

Sometimes the yips and whistles that coyotes make can sound like laughs which is one of the main reasons listening to a pack of coyotes intermingle in the middle of the night can be so entertaining.

The noise happens when the group of coyotes come together and begin making noise together. The mix of different noises like their yips, growls, howls, and whines make a loud symphony. People often refer to this as their nightly celebration.

One of the strangest noises that coyotes make is their screaming noise. This sound is a call for distress mimics the sound of a woman screaming. It can be extremely unsettling to some people when they hear it in the middle of the night and do not know how to identify it.

If you hear a coyote making this noise, it is best that you do not approach them by any means unless you are a professional wildlife expert. Screaming coyotes are often making this noise as a sign of pain or distress caused by a larger predator.

Do Coyotes Make Whining and Whimpering Sounds Like Dogs?

Coyotes are known to make noises remarkably similar to domestic canines which is why people often mistake coyotes for house dogs. You might hear them whimpering, whining, and even groaning.

What Animal Sounds Can Be Mistaken for Coyotes?

Coyotes can easily be mistaken for other animals like foxes, dogs, wolves, and even owls! These animals make similar noises and can be found moving throughout the night.

Why Do Coyotes Howl at Sirens?

Coyotes howl at sirens because they compare the high-pitched sound to their own howl and view it as a threat impeding on their territory.

What Is the Most Common Coyote Noise?

The most common noise that coyotes make is their late-night howls. This is a recognizable noise that many humans are aware of –and afraid of!

Coyotes do not whistle but they make whimpering and whining noises that sound similar to whistling.

Do Coyotes Howl While They Attack?

Coyotes do not howl while they attack because they do not want to draw the attention of other predators to their food.

Coyotes have a bad reputation because of their food choice but these canines are actually really cool! In fact, they have some of the most incredible windpipes in the whole canine community.

As the honorary song dog, it is no surprise that coyotes are the most vocal animals in North America! These canines use howls, whines, and so much more to navigate their ways around, and express their needs. Listening to their chorus on a cool winter night can be entertaining and magical.

As observers, understanding the different noises of these curious canines can provide insight into their intentions as they adventure through the night. Just because you hear them howling does not mean it is dangerous but in any case, remember never let your guard down and always be prepared to act if you are confronted by a coyote.