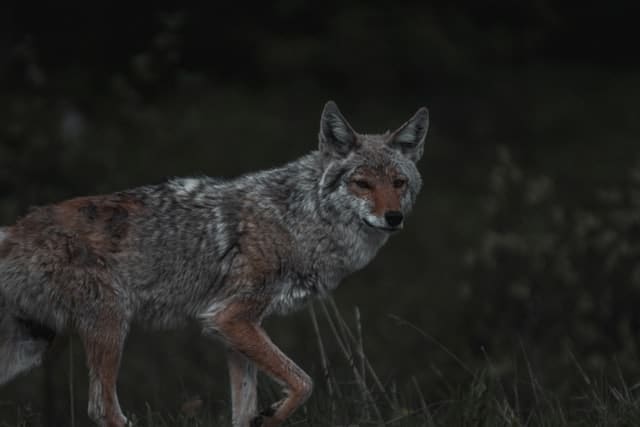 Interbreeding between species is possible and has resulted in the powerful coywolf. The coywolf is a coyote wolf hybrid that has taken on the best qualities of coyotes and wolves, such as the wolf’s substantial size and the coyote’s speed.

As wanderers who thrive on owning territory, coyotes have conquered territory in 49 states in America. This adaptive canine shows no sign of stopping as they continue to claim territory and adapt to new climates and predators.

What Kind Of Animal Is A Coyote, Scientifically? Are They Mammals? Vertebrates? Cold Or Warm-Blooded?

More specifically, coyotes are canines, which is a mammal of the order “carnivora“.

While normal canines would suffer in unbearably low or high temperatures, the coyote learns to thrive. These canines are highly adaptable and can survive in almost any habitat. Even when the weather is harsh, the coyote continues.

Is A Coyote More Closely Related To Felines (Cats) or Canines (Dogs?)

Coyotes are a type of canine that is closely related to domesticated dogs.

Many of their physical and behavioral attributes make coyotes similar to domesticated dogs. Similarly, coyotes are also genetically similar and can even breed with domestic dogs.

Depending on the size of your dog, it is easy to mistake coyote tracks for domestic dog tracks.

Are Coyotes The Same As Wolfs, Jackals, Foxes, Or Wild Dogs?

Many scientists will use these words interchangeably, but coyotes are significantly different than wolves, jackals, foxes, and wild dogs.

Coyotes differ in size, appearance, and even diet from other canines. Behavioral habits and personality traits are also common differences between these animal species.

The habits of coyotes are far different than other canine species. Coyotes are bolder than wolves or foxes, who tend to stay far from humans. Coyotes are unafraid to approach urban areas.

What Canine Is The Coyote Related To The Most?

Coyotes are most closely related to wolves. In addition to their similar appearance, diet, and lifestyles, coyote and wolf breeds have identical DNA optimal for procreation.

Wolves and coyotes have similar coat colors, they are dominating, and they have a carnivorous diet. Both canines are territorial and thrive in packs to defend any animals attempting to cross their land.

Over time in history, the coyote population shrunk. The decrease in size was an adaptive measure that occurred once coyotes were pushed lower on the food chain.

These canines began hunting smaller prey, requiring them to run faster and get into smaller areas. Furthermore, a smaller and wiry size lets them evade predators and stay hidden in dangerous situations.

Are Coyotes Some Kind Of Hybrid Between Species?

Coyotes themselves are descendants of wolves and are not a hybrid species. It is a popular misconception that coyotes are a hybrid between domestic dogs and wolves. The belief that coyotes are a dog-wolf hybrid was proven false when scientists discovered that coyotes have almost the same DNA as wolves.

Coyotes can create hybrids with other canine species, such as the wolf. Coyotes and wolves have created a coyote-wolf hybrid known as the coywolf. Scientists claim that this species is a recognizably strong canine species.

Coyotes may also create hybrids with the domestic dog. The dog-coyote hybrids are called mutts.

When Did Coyotes Evolve? Are They Descended From Wolves?

Coyotes are long descendants of wolves. There is no exact date of when coyotes evolved. To abide by the written word, coyotes must have descended from wolves well over 15,000 years ago when humans saw the first coyote.

Scientists researched coyotes, wolves, and coywolves (coyote-wolf hybrids) to evaluate the differences between each species’ DNA. In their research, scientists found no way to differentiate wolf species from coyote species based on DNA.

The overwhelming results that wolf and coyote DNA do not differ suggest that coyotes are, in fact, close descendants of wolves.

When And Where Were Coyotes First Discovered?

For millions of years, the wild coyote has roamed the Great Plains of North America. There is no definite proof of when scientists first discovered the coyote. Take a look at the following evidence to decide for yourself.

In 1804 a transcription from the journal of the notorious William Clark announced the discovery of coyotes. In the transcription, Clark was confused by the appearance of these prairie wolves, which he had never before seen.

The journal recorded what historians believe was the observance of a coyote “about the [size] of a gray fox.” Clark was under the assumption that the coyote was a fox.

E. Raymond Hall, a naturalist from the early twentieth century, was one of the first people to record the discovery of what modern scientists believe were coyotes.

Hall recorded details about an unknown species similar to the red wolf but with “a smaller size and more slender build.”

He also claimed that the footpads were smaller, the nose sharper, and the fur coloration was “tawny.” These descriptors are consistent with the coyote, who later became known as the jackal of the prairies.

In the New International Version of the Bible, Isaiah 43:20-28 speaks about the animals who praise God. He says, “The wild animals honor me, the jackals and the owls…”.

The term jackal in this passage is referring to a small canine creature in the desert. Many people use ‘jackal’ and ‘coyote’ synonymously with each other.

The synonymous language gives many people reason to believe that Isaiah 43:20-28 also refers to coyotes.

What Are The Main Differences Between Coyotes, Foxes, Wolves, And Dogs? (Other Than Size)

There are many differences between coyotes, foxes, wolves, and domesticated dogs. All these animals are a part of the canine family. However, they vary significantly in the way that they function and look.

The Differences Between Coyotes and Wolves

The main difference between coyotes and wolves is their facial shape. Coyotes have a thin face with a long, slender snout. Wolves have round faces with short and wide snouts.

Another major difference between these two canines is their ears. Coyotes have pointed ears. Wolves, on the other hand, have rounded ears that match their rounded faces.

Wolves are noticeably larger than coyotes, including height and weight. The size difference between coyotes and wolves includes when the two canines are pups. A juvenile coyote is smaller than a juvenile wolf. Furthermore, the wolf will develop and grow more quickly.

The Differences Between Coyotes and Dogs

Depending on the breed, there can be a major difference between coyotes and dogs. Small, teacup breeds are defenseless against coyotes, whereas large breeds might scare coyotes away.

Take a look at the paw print, if possible. A coyote’s paw print is oval, with small pads.

Dog paw prints are round with large paw pads.

The patterns of the prints are good identifiers too. For instance, a coyote’s prints will often appear in a frantic zig-zag pattern, and dogs run in straight lines.

Dogs come in a variety of breeds, and some look oddly like coyotes. Coyotes have long snouts with pointed ears. Dogs will have many different ears, facial features, and types of fur colors, patterns, and textures. Coyotes fur is short and limited in color.