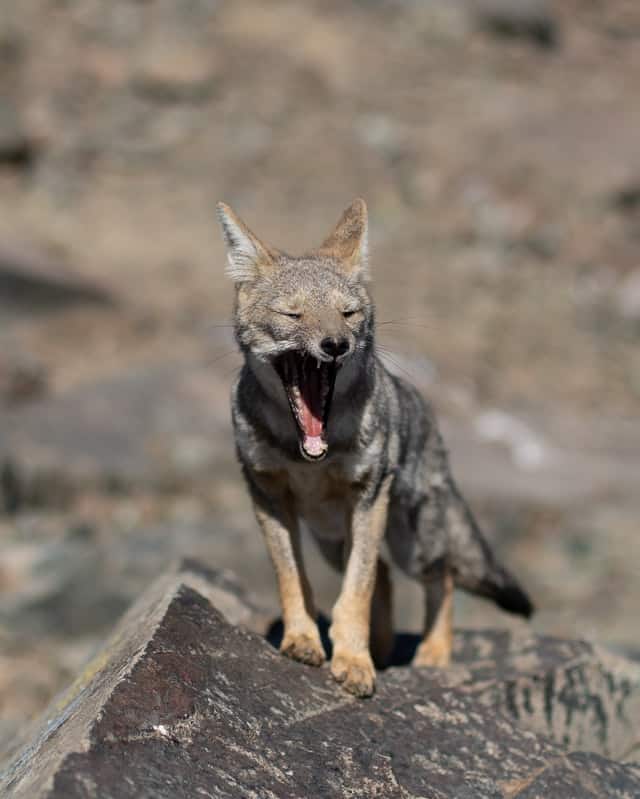 One of the most distinguishing features coyotes have from their canine cousins is their small, narrow, and pointy snout. Even though this is a rather diminutive feature for this type of creature, their jaws have an amazing and expansive range.

Since these pack animals are both scavengers and hunters, their snouts, also called muzzles, are the raison d’être in a coyote’s life. Its intricate design gives them amazing alacrity, from the most delicate handling of things to the most intensive activity.

What Do Coyote Teeth Look Like? How Long Are They? How Many Do They Have?

Coyotes have 42 teeth that are incredibly impeccable and precise. Their canines can measure between 15½ mm to 36½ mm wide with a length ranging between 31½ mm and 38 mm.

The total line of teeth along the jaw measures just about four inches. These canine teeth are large, round, and pointy with heavy premolars and molars for crushing hard material, like bone. Four total canines sit on the upper and lower parts of the jaw.

Their narrow snouts mean coyotes can get into tight areas and use their jaws in a refined utilitarian way. These animals can use their teeth for everything from picking apart smaller prey to cleaning their coat of pests and even picking up their young.

The appearance of a coyote’s teeth can tell us a lot about their age. In laboratory situations, scientists can determine the age of a coyote by counting its teeth’ layers of cementum. This is material covers the whole tooth which allows for strengthening and better usage.

Coyotes grow a new layer of cementum each year. So, a coyote with 16 cementum layers means they’re about 16 years old. Coyote’s teeth get longer and larger as it ages.

The teeth are very sharp but not nearly as sharp as those of, for example, a house cat.

Since coyotes are omnivores, they need their teeth to be able to accommodate catching prey, as well as eating fruit and nuts. Coyotes use the premolars that sit behind the canines to chew on tougher substances. It also provides the grip to clamp onto their prey.

Are Coyote Teeth Different from Dog or Wolf Teeth?

Wolves, dogs, and coyotes have a similar tooth structure. There are always premolars, molars, incisors, and canines.

The difference between coyotes and their wolf or dog cousins is in the straightness of the line in their jaw. The ratio of palate length to width is just over two. Dogs and wolves are less than that.

Wolves and dogs tend to have a crooked or hourglass-shaped jaw whereas coyotes have a perfectly aligned u-shape with straight lines from the front to the back. The facial bones and inner jaw of the coyote is much thinner than wolves or dogs, making their skulls a bit lighter.

How Strong Are Coyote Jaws? Do They Bite Hard?

Coyotes have very strong jaws and can take on a variety of animals, especially bigger predators or enemies when the coyotes hunt in packs. They have a bite force of 88 pounds per square inch (PSI).

Their jaws measure about 5½ inches when they are adults with a tooth line of about four inches long.

The narrowest part of their entire snout is the lower jaw, but it’s also the lower jaw that packs the largest punch.

The shape and design of a coyote’s skull allow for maximum power to the lower jaw, all of which are adept for eating meat.

Will a Coyote Actually Bite You?

Coyotes will very much bite humans. However, they are more apt to run away or hide. People are more likely to get hit by a stray golf ball than they are to receive a bit from a coyote.

That said, if a coyote is old, sick, or hungry, it will attack any age person or snatch a child in a similar way as they do small prey.

It is important to note that coyote aggression and assertiveness toward people have increased in the last five years. Even as recently as August 2021, children seem to be more on the receiving end of these attacks than adults.

Because of the quick and fast nature of a single coyote bite, it would hurt a little more than a full bite from a determined house cat. But, if the coyote makes multiple bites, it hurts quite a bit. When it is able to get at the throat or into a major blood vessel, the bite can be fatal.

Therefore, bites from a pack of coyotes will be very excruciating and deadly.

Can Coyotes Bite Through Bone?

A coyote’s bite can make it through and into very hard materials, including bone, quite easily.

Their carnassial teeth, molars, and premolars are what make this possible. But, they only bite through bone upon successful domination over their prey.

They start their attack by going for softer and more vulnerable tissue, such as the throat.

When a coyote bite is present, there are usually four very deep puncture marks at the site. These are the four canines that initially sink into flesh.

Depending on the depth of the bite and if the coyote was successful with a kill, there will also be signs of their molars and premolars behind the deeper puncture bites.

How to Tell If an Animal Has Been Bitten by a Coyote?

Unless you have a much-trained eye to differentiate jaw signatures, it’s going to be difficult to tell if an animal has encountered a coyote.

They bite quickly, clamp down, then shake and release. This is what forces an animal to collapse because of the rattling of the internal organs.

But there are a few indicators to guesstimate if an animal suffered a coyote’s bite. First, if you know coyotes are in the vicinity, then the likelihood is there.

Next, the profuse presence of blood seeping out from a wound will increase this likelihood.

And, finally, the location of the animal is important too. If there is evidence the animal experienced transportation to its location, it’s likely a coyote attack. Coyotes will drag their prey up to just over a mile away from the hunting location to eat safely.

Taller and bigger animals like deer and bears will have bite-marks at their hindquarters and various areas around the legs.

If the animal is dead, there should also be a decisive bite at the throat area. Other indicators are bite marks present around the shoulders or flank.

Baby coyotes definitely bite. When coyote pups first come into the world, they don’t have teeth until they are about four or five months old.

This is when they start participating in hunts and tracking prey, which helps them build up the power in their jaws for adulthood. But, they do begin developing cementum at 20 months old.