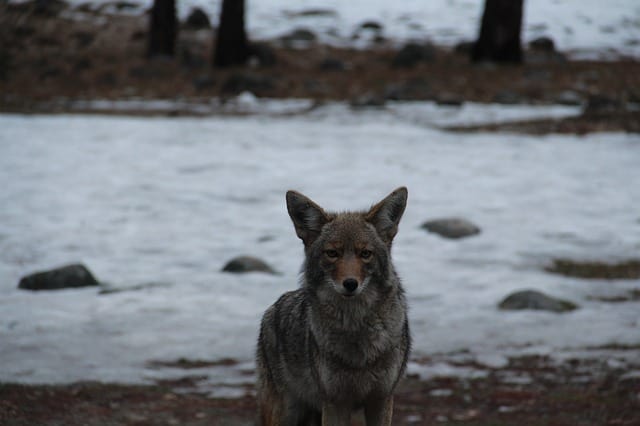 Coyotes are naturally unaggressive animals that are fearful of humans. However, they can be dangerous because they can carry rabies contagious to humans and household pets. According to the Center for Disease Control, rabies is a preventable disease found in wild animals, including the coyote. The contagious disease is fatal if not immediately treated.

This article answers some common questions about the dangers of coyotes. These questions discuss the results of provoking coyotes, and how to stay safe from coyotes.

The coyote is not a dangerous or naturally aggressive animal. The only thing that makes coyotes dangerous is their likelihood of carrying diseases. In many cases, coyotes will carry rabies or another type of contagious canine illness.

How Dangerous Are Coyotes?

Coyotes are usually not dangerous because they fear humans, but since they carry diseases like rabies, these wild canines can be highly dangerous to humans and household pets. According to the Centers for Disease Control (CDC), rabies is fatal without immediate treatment.

The disease is transmitted through a bite or other transfer of saliva, so it is typically easy to spot. Even if you seek treatment in time, being bit by a rabid coyote can still lead to a devastating loss if you do not have vaccinations.

When Are Coyotes The Most Dangerous?

Coyotes are the most dangerous when infected with diseases such as rabies or mange, contagious to humans or pets. A healthy coyote rarely attacks humans unless provoked. They will not chase cyclists, joggers, skateboarders, or other people moving fast. It is also uncommon for a healthy coyote to follow a human in the wild.

The coyote uses its natural hunting abilities to take down prey when provoked. Coyotes are extremely fast, which means they can easily catch their prey. If the coyote catches its prey, it can easily pierce the flesh with its sharp claws and teeth.

Coyotes Are Dangerous When Infected

Illness and disease are the most dangerous part of coyotes. Most diseases carried by coyotes are contagious to humans and pets. Common diseases include canine hepatitis, rabies, distemper, and tularemia. They may also carry a variety of parasites that can also be contagious, especially to pets.

Coyotes Are Dangerous In Packs

Coyotes are the strongest when working together in pairs, groups, or packs. As a pack, the coyotes move as a unit to hunt larger prey. If you provoke the coyote while it hunts in a pack, they are more likely to attack than if you were to provoke them when hunting alone.

Since coyotes rarely work alone, there are most likely others nearby if you encounter a coyote alone. The more coyotes that work together, the stronger the coyotes are.

Are Coyotes More Dangerous Than A Wolf?

Coyotes are less dangerous than wolves in terms of how frequently they attack humans and the number of diseases these animals carry.

The coyote is a species that evolved from the wolf. Therefore, they are like the wolf -only weaker. They have a weaker immune system, making them prone to diseases that the wolf can withstand.

Wolves have little history attacking humans, but all the reasons for attacking are similar to coyotes. For instance, according to the International Wolf Center, when wolves encounter humans, they show little interest in them unless provoked. The behavior of wolves and coyotes is nearly identical, aside from their ability to withstand disease.

Do Coyotes Ever Attack Or Bite Humans?

Coyotes rarely attack or bite humans because they are timid animals. When they attack humans or animals, they are typically infected with a disease or provoked. Provocation can occur because of human behavior or because of a dog.

It is unlikely for a sane or healthy coyote to disturb a campsite unless food is left out. Even then, they will not approach unless it is nighttime and there is no movement or noise from the campsite.

Coyotes are solitary creatures who are fearful of humans. Rabies is a major consideration at all times, but according to the CDC, the rabies population has been severely declining in recent years.

Coyotes are not aggressive animals. They typically fear humans and will run away if you perform any type of hazing practice like yelling or stomping your feet. However, the coyote can quickly become aggressive when provoked.

An angry coyote makes distressed vocalizations like snaps and snarls to indicate displeasure. They will take a power stance to intimidate or prepare for an attack.

In What Case Does A Coyote Attack?

Coyotes do not usually attack humans. In rare cases, they may see humans as threats or food sources. When this happens, coyotes will attack humans.

Coyotes Have Rabies or Other Disease

A coyote who has rabies or another disease might attack a human. These attacks will pass rabies onto you or your dog. The CDC identifies common symptoms of rabies as sudden aggression or unprovoked attacks, a foaming mouth, shaking, drooling, paralysis, and increased friendliness or tame behavior.

How Do You Stay Safe From Coyotes?

Wild coyotes are prone to carrying diseases, which can cause them to act abnormally, like overly friendly or suddenly aggressive. When you take walks in the evening, pay attention to your surroundings. Knowing if there are coyotes around you will keep you safe from lurking dangers. Be prepared to haze and keep a tight grip on your dog’s leash at all times.

Getting the proper vaccines for zoological diseases such as the rabies vaccine, courtesy of the CDC, is the best way to stay safe from coyotes. The rabies vaccine prevents rabies and is one of the leading reasons for the decreased rate of contracting rabies from wild animals in humans.

Having a vaccine is an added layer of protection if you get bit, but, unfortunately, it is not foolproof, and there is not a vaccine for every illness. Still, you should always seek medical treatment.

Hazing coyotes is one of the most common ways to stay safe from coyotes. Make loud noises by shaking objects, hitting metal against other objects, or throwing small objects near the coyotes. Never throw objects directly at a coyote since this can provoke them.

While walking your dog, always keep them on a leash. Be aware of your surroundings so you can spot things first. If your dog barks, do not let them run toward its object of interest. Pull your canine closer and give the direction a good observation.

Do Not Walk Around Sunset

Coyotes become active around dusk. If you need to walk your dog or go for a run, plan on doing so before the sun begins to fall. You may encounter a dangerous coyote, especially if you have a dog with you.

Back Away From Wild Coyotes

Encountering a wild coyote that is unafraid of hazing protocols might mean that they are rabid or have some other ailment. They may also be unafraid of humans, which can be dangerous to you or your pets before finding out if they have diseases or dangerous behavior, back away slowly.

If you encounter a coyote, it is good to maintain eye contact as you retreat from the coyote backward. In addition to retreating, you should haze the coyote.

Maintaining eye contact with coyotes guarantees that you know where they are at all times. A coyote could attack you from behind if they are rabid. You should be cautious as you retreat from the animal.

Do Coyotes Fear Humans And Children?

Coyotes naturally fear humans, including adults and children of all ages. Usually, the sight of a human will cause a coyote to flee. When a coyote runs away, this is a good sign. It means that they are scared and uninterested in human activity. Since the behavior is inconsistent, it also decreases the likelihood of being infected with rabies.

Do Coyotes Know When You’re Afraid? Does That Make Them More Aggressive?

Coyotes cannot tell if you are fearful of their presence, but you must maintain eye contact and appear confident as you haze them. Never run away from coyotes, or they may view you as prey and choose to chase you.

Do Coyotes Have Venom?

Coyotes do not have venom, but they may have contagious illnesses and diseases like rabies. The ability to pass on disease is the coyote’s most dangerous trait. Their contagious illnesses are also the main reason to be cautious around coyotes. A single bite from a coyote can infect you or your dog with any of their diseases.

Should You Avoid Looking A Coyote In The Eye?

In a situation when you are alone with a coyote, you should maintain eye contact with them because it asserts dominance over them.

Eye contact lets you know where the coyote stays at all times and allows you to safely retreat without showing your back to the coyote. Turning your back to coyotes can be dangerous because of your potential for being attacked.