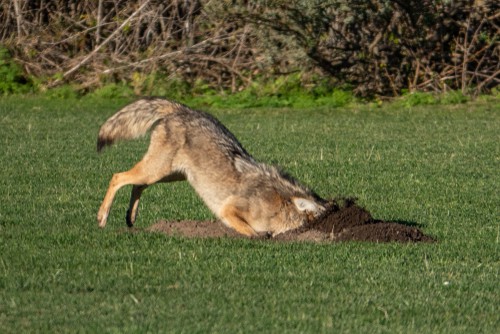 Coyotes are great at digging holes, and there are many reasons that coyotes dig. The most common reason that coyotes use their digging talents is to create underground burrows where they raise their pups and hide from predators.

They also use their digging abilities to tear apart and hide food. Coyotes dig for food like rodents, worms, and foxes. Coyotes may also dig for carrion if given the opportunity. Digging is one of the most common ways that the coyote supports and protects itself.

You can prevent coyotes from invading your property by using galvanized wire. Install an underground barrier, which prevents coyotes from digging under your fencing. You should bury the galvanized wire at least five-and-a-half inches deep around the fence perimeter.

Coyotes dig holes so they may sleep in dens and burrows. These wild canines are a common predator to many small animals and insects. However, they are also, themselves, prey to many larger animals like wolves and mountain lions.

Coyotes dig holes for many purposes, such as safety, comfort, and finding food.

Digging is one of the many talents coyotes have that help them remain at the top of the food chain despite their small size. Coyotes use digging to steal burrows, dig up rodents, and hide from larger predators underground.

Do They Dig Their Own Dens And Burrows?

Coyotes dig their own dens and burrows. The average coyote den is only a few feet in size. But may range up to fifty feet, with several openings and rooms.

Although coyotes can dig their own burrows, they may also steal them from other animals too.

Will Coyotes Sometimes Take Over Dens From Other Animals?

It is common for coyotes to take over dens from other small animals like foxes, rabbits, and other animals. If the den they find is not big enough for them, the coyote will dig the burrow so they can fit easier.

Coyotes typically take dens from other medium-sized carnivores like skunks and raccoons. In the process, they either consume the animal or run them out of the territory.

How Do Coyotes Build Their Dens?

The most common way that coyotes build dens is by digging an underground burrow that goes at least one foot underground. They will also build dens by stealing dens from other animals and then digging them wider.

Coyotes also build dens by digging into fallen or rotted tree trunks. Rotted trunks are great temporary dens because they are easy to build, provide protection, and are great for escaping harsh weather.

How Deep Can Coyotes Dig?

Coyotes can dig very deep. There is not an exact measurement available because they are always adapting to new behaviors. Since the coyote is a great digger, that means without preventative measures, the coyote can dig underneath unprotected fences very easily.

Coyotes do not dig tunnels, but they will dig large burrows that may have several entrances. These dens with numerous entrances can easily be mistaken as tunnels because of how large they eventually become.

Do Coyotes Bury Their Food?

Coyotes sometimes bury their food. Burying their food allows the coyotes to hide their meal from larger predators like mountain lions and wolves while they are away. Then, they may return and eat the rest of their meal later.

Will a Coyote Dig Up Dead Animals?

A coyote will dig up dead animals if they smell them. One of the main parts of the coyote’s diet is carrion. Even if the coyote does not eat the dead animal, they take joy in rolling their body in the dead animal so they may enjoy the rotting smell.

Do Coyotes Dig For Grubs, Moles, Mice, or Other Things To Eat?

Will A Coyote Dig Up Your Lawn or Flower Beds?

Coyotes do not typically dig up flower beds unless they are interested in what you have planted inside of the flower bed. In some cases, the opportunistic coyote might become interested in the smell of certain vegetables and become enticed to try the various plants in your homemade garden.

A coyote may also dig up your garden because of insects, small mammals, and rodents that live in your garden.

Did A Coyote Dig That Hole? What To Look For

Coyote holes are large, typically a foot wide. Pay attention to the exterior if you suspect a coyote dug the hole. Several visual indicators may signal that a coyote has dug the hole.

Visual indicators that a coyote dug the hole include:

They are slightly sloppy and dig with their dirt in piles. If you notice dirt clumped in messy piles, this is an indication of a canine hole.

You may also choose to listen to your surroundings. If you hear howling at night near the hole, that is a common sign that a coyote owns that burrow.

Many animals might be digging up your lawn without you knowing. In fact, the presence of these animals in your lawn might attract coyotes. No matter what you try, unless you rid yourself of these small pests, coyotes will continue returning for this food source even after it begins to rot.

Common animals that dig up backyards include:

If dirt is pushed from underground toward the surface, that indicates that a small animal is burrowing underground. Unlike coyotes, pushing dirt from under the ground is an indication that the animal lives underground.

Removing smaller animals from your yard can prevent coyotes from entering your yard. Most of these animals attract coyotes and may lead to a coyote infestation if you are not careful.

Can Coyotes Dig Under Fences? Or Get Into Chicken Coops?

Coyotes are known for sneaking into chicken coops to eat chickens and eggs. They have an easy time digging underneath fences as well as jumping over fences. To ensure that coyotes will not get into your chicken coop, you must make your chicken coop and your fence coyote safe.

How To Make A Barrier Coyote Proof

To make a barrier coyote proof, you must extend your fence at least five-and-a-half feet underground. An underground fence prevents the coyote from digging under your fence. In most cases, coyotes will give up when their attempts are obstructed.

Good barriers to place underground are barbed wire, chicken wire, and galvanized wire. When a coyote feels this, they will no longer dig in that area. Farmers may also recommend surrounding fences with tripwires, if possible.