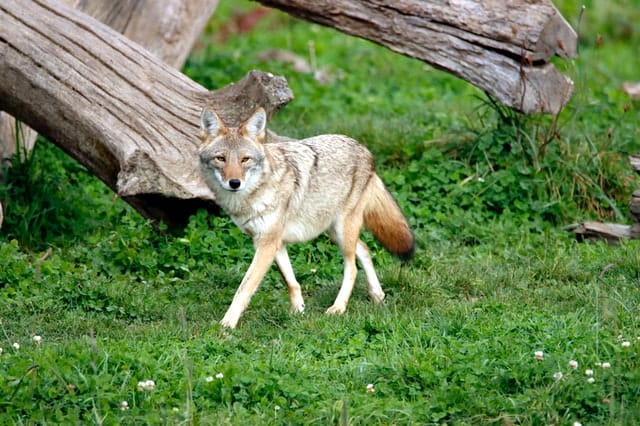 Coyotes are omnivores with an expansive diet consisting mainly of small prey like mammals and reptiles and small amounts of vegetables, fruit, and nuts. The coyote will generally adapt its diet as needed. In certain areas, different foods are available. The intelligent coyote uses these adaptation skills to hunt foods that accommodate its dietary needs.

The remainder of this article will introduce what coyotes eat, the coyote’s hunting tactics, and how the coyote digests its food.

What Do Coyotes Eat

As an omnivore, the coyote will eat anything they can forage. The coyote forages a variety of fruits and vegetables. They also hunt many small animals such as rats or snakes. Small rodents are the most common part of the omnivore’s diet. Mice are easy to chase and catch for the curious coyote. It also fills their desire for entertainment and playfulness.

Coyotes also eat veggies and fruits like the cactus fruit and many garden vegetables like tomatoes, carrots, and much more. People complain about their vegetables and fruits going missing. In many cases, coyotes are one that you can blame.

Do Coyotes Only Eat Meat? Are They Carnivores, Herbivores, or Omnivores?

Coyotes are omnivores with an arrhythmic diet. A majority of their diet consists of meat, with a small portion of their diet made of vegetables. However, as the seasons change, their dietary selections may differ.

When animals are active during the warmer months, coyotes will eat a lot of meat. They rely on vegetation and berries in the colder months since most of their small and medium prey are hibernating.

Are Coyotes Scavengers? Do They Eat Meat That’s Gone Bad?

Coyotes are scavengers who will eat nearly anything, including carrion.

Carrion is decomposing meat that has been previously hunted, primarily by another animal. Coyotes don’t shy away from scavenging meat that has gone bad. They can identify expired or expiring meat by its putrid smell.

Coyotes are often already teeming with diseases like tapeworm, which means the coyote’s stomach is fully capable of handling the rotten meat and any diseases inside them.

What Part Of Their Prey Do Coyotes Eat First?

Coyotes eat bones as a source of calcium, which they do not typically get from any food they consume. They will strip the bones of meat and gnaw on them before eating on the bone. To make them easier to digest, coyotes refrain from swallowing them whole. They will chew the bone and grain it as much as possible.

Do They Eat The Entire Animal, Head, Bones, Fur, Intestines And All?

Coyotes mostly eat the meat from their prey, but they may also eat other parts of their prey, including bones, intestines, fur, and more. They are an opportunistic eater who will consume food based on their caloric needs. The coyote makes a judgment call before consuming their prey.

Any food that the coyote does not eat initially will get buried underground in a cache. Then the coyote will return sometime later to eat the remainder. Burying the leftover food protects other animals from smelling the coyote’s prey. That way, when they return, they will not compete with other animals over their catch.

Do Coyotes Ever Eat Other Coyotes?

Coyotes do not usually eat other coyotes unless they need to. If food is scarce and the only thing to eat is another coyote, coyotes might prey on a viable member of the pack or a transient coyote.

Turning to cannibalism as a way to feed themselves is the last case scenario for coyotes. They have a wide range of feasting capabilities, and therefore the coyote will typically try to eat anything else beforehand. Given they are scavengers, they can typically find food elsewhere, either as a vegetable, insect, or type of meat.

Do Coyotes Only Eat At Night?

Do Coyotes Eat Every Day?

Coyotes will eat every day. They require around 2 to 3 pounds of food each day and get most of this from hunting small mammals like rats. They also get food from eating vegetation, insects, and carrion. However, they prefer fresh meat.

Do They Eat Their Prey Where They’ve Taken It Down, Or Do They Move It?

Coyotes do not move their prey after capturing it mainly because they have already used most of their energy catching it.

They eat their catch relatively quickly to avoid getting spotted by larger prey before burying it. Hiding their food lets them come back to eat, but prevents it from getting seen by other hungry canines.

The lack of attention prevents large predators from gathering around the area, so the coyote does not prey upon. After all, they will be very vulnerable as they eat later.

A coyote’s favorite food is small rodents like rats. Small rodents are easy for the coyote to catch because they are vulnerable.

Small terrestrial mammals are slow and remain low to the ground, which is a major benefit for the coyote. Furthermore, rodents like the mouse hide in burrows which seem safe. However, the coyote can dig into these burrows and reach these small rodents if they are desperate enough.

Although rodents are small, they come in a variety of sizes. Coyotes may also eat medium-sized rodents and other mammals they can easily chase and dig out of the ground.

What Type Of Prey Do Coyotes Eat?

Coyotes hunt all sizes of prey. They prefer small prey. However, the medium-sized coyote can still hunt medium and large prey. Coyotes may need to hunt in packs or eat the prey after it has already perished if the mammal is too large.

The coyote is a stealth predator that blends in well with its environment. The coyote’s great camouflage makes sneaking up on birds and other fast prey easy for them. They hunt many species of birds, which vary depending on their location.

Coyotes eat many medium-sized animals because many medium mammals come out at night when the coyote is active. There are also plenty of animals that coyotes feel free to feast on when they come out during the daytime.

It is infrequent that coyotes will attack domestic dogs. However, if a coyote gets provoked or desperate for food, a coyote may attack and eat a domestic dog. They are also known to mistake domestic dogs for other medium-sized prey.

The only time coyotes prey on big game is when they are in packs. Otherwise, they will consume the carcass of big game. A single coyote is too small to take down a big game animal like a deer. However, coyote packs can hunt deer or elk easily by working collaboratively.

Some of the common big game that coyotes may hunt include:

If large game animals are injured, coyotes may attack them alone. They may also attack large prey if they can sneak up on them or are alpha coyotes with good combative skills.

Do Coyotes Like To Eat Vegetables, Fruit, Berries, And Nuts?

Common berries that you may find in the coyote’s diet include juniper berries, blackberries, and blueberries. In addition, they also consume many fruits like apples, peaches, and cantaloupe. Some people claim that coyotes have a wide palette and a desire to taste flavors. Other people say they will just eat anything they can find!

Coyotes are likely to consume any type of fruit or vegetable. Coyotes will not go out of their way to scavenge food in residential areas. However, if they find a fruit or vegetable in the wild, they will most likely eat the food.

What Other Kinds Of Feed And Food Items Might Coyotes Eat?

There are several things that coyotes might eat, aside from natural vegetation and meat. You should never intentionally attract coyotes by feeding them because it can be dangerous for you and your pets.

Coyotes will eat corn from a deer feeder. Deer feed is typically just corn and is a great way to attract a scavenging coyote because they are willing to eat nearly anything for the nutrients. This tasty meal is also great because it puts them closer to other prey. If you want to attract coyotes close to you at a low cost, this is the best way.

Coyotes are attracted to the meaty odors of pet foods which entice the omnivore. Leaving pet food in the backyard is one way to attract coyotes into your neighborhood (or your backyard). A hungry coyote will take up the opportunity to feed on leftover food since it has many of the same proteins they hunt in their daily life.

Coyotes Love The Smell of Trash

Coyotes also enjoy the general smell of trash. Urban coyotes are scavengers who will dig into the trash and explore backyards when they cannot find food. They will dig through to eat leftover food that has not been tied properly before disposal.

Coyotes are pests to farmers and livestock. They will approach geese and chickens, only to take their eggs. Coyotes can take up to twenty goose eggs from a geese’s nest in one evening. The coyote will dig hiding places where they will hide the eggs so farmers cannot find them even if they search.

Should You Feed Coyotes? What Happens If You Do?

You should not feed coyotes because it can become a dangerous situation for your health and safety. Coyotes are wild animals and are unpredictable. You never know what can happen, and it is best to heir on the side of caution.

Coyotes can carry diseases, many of which are dangerous to humans. So, each time you feed a coyote, you are jeopardizing your health. Some contagious diseases have no physical identifiers. For your safety, you should stay away from coyotes.

By feeding a wild animal, you promote comfort in a residential area. Promoting comfort where an animal should not be is dangerous because you encourage more coyotes to move into the residential area. You also subject yourself to danger when you push the trust too far and endanger others when coyotes begin approaching them for food.

Coyotes can eat nearly everything they find in the wild, aside from peppers and poisonous berries. Luckily, the intelligent coyote has learned to determine which foods they can and cannot eat.

Certain berries like the Poroporo are toxic when green, but the coyote knows to wait until these turn orange. Despite eating nearly everything they encounter, the coyote abides by safety precautions anytime they eat.

Taking down large prey is impossible for the coyote if the prey is not injured or otherwise weakened. If they want to attack prey larger than them, the coyote relies on large numbers and additional strength. Therefore, they tend to avoid them.

The coyote will not eat badgers. There are very few things that coyotes will not eat, given they are opportunistic eaters. However, according to National Geographic, the coyote has a mutualistic relationship with the badger.

The badger is the only mammal outside their packs that the coyotes will collaboratively hunt alongside. Typically, transient coyotes display this behavior more than coyotes who belong to packs.

Aside from their hunting partners, coyotes also avoid spicy foods or foods with overwhelming stenches. They will not eat peppers, onions, or other veggies that release a debilitating stench.