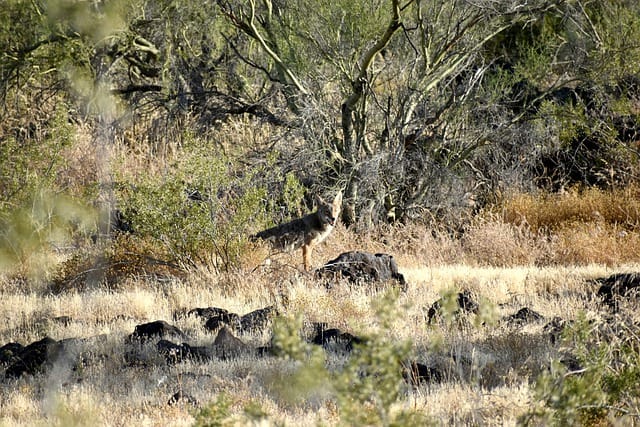 Coyotes are an adaptive species that are considered an integral part of the ecosystem. Coyotes are classified as “least concern” species because of their rapidly growing population.

The coyote has territory in 49 states and counting, with extinction nowhere in sight. The exact number of coyotes in the United States is unknown. However, the range of coyotes is continuously spreading each year.

Are Coyotes on the Verge of Extinction?

The coyote population is nowhere near extinction. Coyotes are resilient animals that learn to adapt. That ability to adapt makes reaching full extinction impossible because the coyote finds a way to thrive even under the worst circumstances.

Nearly half a million coyotes get hunted per year for various reasons like fur trade or sport, but the coyote population grows and spreads across the United States.

Humans continue to hunt coyotes because they are uneducated about what coyotes can do for them. Still, there is no prediction that coyotes will go extinct any time soon. The more they are preyed upon, the more this species will learn to adapt.

The modern coyote is classified as a “least concern” species by the International Union for Conservation of Nature. They are constantly adapting to new surroundings as the coyote extends their range from its origins in the Great Prairies and further across the globe.

The modern coyote is an individual hunter that relies on its small size to capture small prey.

The Pleistocene coyote is a subspecies of the coyote that became extinct in the Ice Age. These coyotes were much larger than modern coyotes. Evidence suggests that the large Pleistocene coyote ate larger prey, which led scientists to believe it was more of a pack hunter in its previous evolution. This behavior is similar to the modern wolf.

Are Coyotes Endangered or Threatened?

Coyotes are continuing to repopulate at a rapid rate which has left many humans concerned. It has expanded its range by 40 percent since the 1950s and is now in over 49 states and two continents.

Are They More Threatened in Some States Than Others?

There are no areas where coyotes are listed as threatened. However, some places are populated more densely with coyotes than others.

How Many Coyotes Are There In The US?

It is unknown exactly how many coyotes there are in the United States. Estimations are always changing due to external interference. Whether it is a human or another animal, any intervention can severely impact the number of coyotes.

Coyotes are currently thriving more than ever. As of recently, coyotes’ range has expanded to 49 states. The coyote has even reached Mexico and Canada. Scientists predict that this canine species will soon transcend past the Darien Gap and into South America at its current repopulation rate.

Many people believe that hunting coyote is the solution to this growing population. Hunting does not help with population control, however. The alpha coyote will repopulate the following year, and within a few years, there will be more coyotes than there were when you started!

What are the Dangers to Coyotes?

Humans are the most common danger to coyotes. Humans hunt coyotes to sell their pelts or to keep them from coming on their land.

There are problems with both of these tactics since coyotes are quick to adapt and can repopulate quickly.

Hunters Can be Dangerous to Coyotes

Another common reason people hunt coyotes is to remove them from their property. Using a lethal removal method is inhumane when there are dozens of non-lethal methods.

Farmers Can be Dangerous to Coyotes

Farmers can be dangerous to coyotes. Coyotes often hunt small livestock like chickens, baby goats, and lambs for food. Hunting livestock is problematic for farmers who, in most cases, will use lethal methods to remove the coyotes.

Large Animals can be Dangerous to Coyotes.

As a medium-sized canine, many large animals are dangerous to the coyote. Common large animals that are a threat to coyotes include their ancestor, the wolf. Wolves are larger than coyotes and, by default, are higher on the food chain.

Coyotes must often defend themselves against animals that are larger than them.

Should Coyotes Be Protected?

At this point, there is no explicit reason that society should protect coyotes. Without reason, they have nothing to concern them to protect coyotes formally.

Reasons Why Coyotes are Important

Coyotes are medium in size and, as omnivores, play a large role in moderating the ecosystem. Their participation at any level of the food chain plays a large part in the success of the whole ecosystem.

The coyote’s main objective is to thrive and manage the population in their area. The clever coyote controls the population by functioning as a predator to small animals like rabbits and prey to larger animals like wolves. The way coyotes eat or get eaten will impact every living being in their ecosystem.

Coyotes can function as predators. These canines are the main predator of foxes like the red fox and gray fox. Foxes are apex predators that are often hunt domestic cats. Coyotes limit fox populations which reduces the number of domestic animals that get eaten by foxes each year.

Some of the small animals that coyotes prey on include:

Coyotes can function as prey. Although coyotes can do a good amount of hunting themselves, large predators like mountain lions will hunt coyotes.

Some of the coyotes most common prey include:

Is The Coyote A Keystone Species?

Coyotes are keystone species that stabilize their ecosystem. Keystone species play a critical role in their biological community. As a mesocarnivore, coyotes play an active role in controlling the population of the small animal community.

It is not likely that coyotes will ever go extinct. At the rate they are going now, coyotes will continue to adapt and spread.