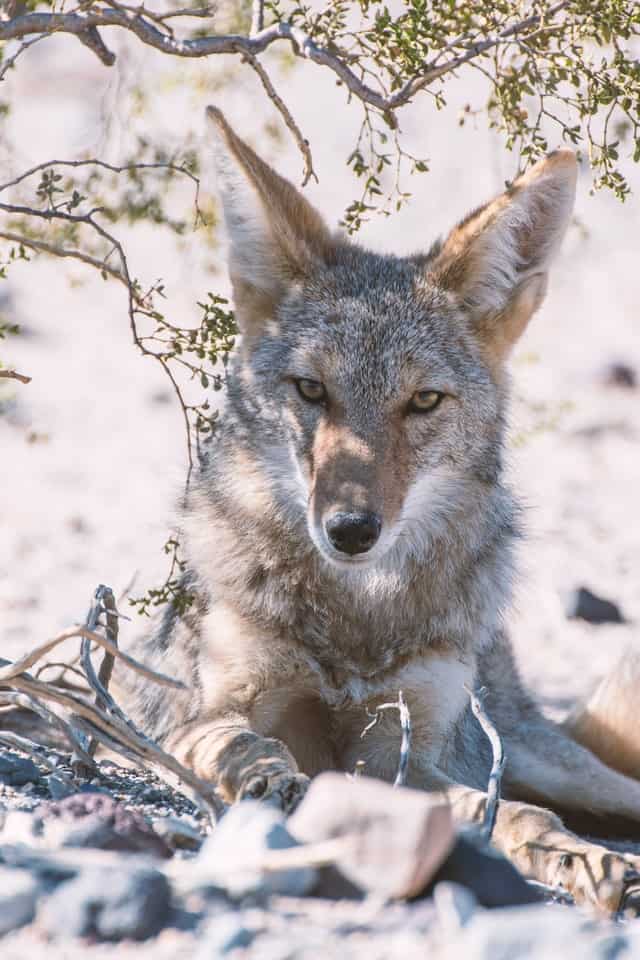 Coyotes are opportunistic hunters who can hunt in any weather conditions. The hunting methods of the coyote vary, working as a pack or individually to hunt their prey.

The semi-nomadic coyote generally hunts in the same area every time and can negatively impact local deer populations.

How Do Coyotes Hunt?

Coyotes are opportunistic hunters that eat based on the food that is available to them. The coyotes are omnivores who can eat grass, berries, meat, and more. Depending on the prey they go after, they will hunt individually or in groups.

When it comes to hunting large prey, coyotes work together as a pack.

Coyotes are strategic, and they know the value of their prey. 90% of their diet is made of small mammals, which means that hunting in groups is not common.

Does a Coyote Hunt By Scent Or By Sight?

Coyotes use their sharp eyesight and a strong sense of smell to track prey from miles away. Wounded animals and carrion are especially prone to their smell tracking.

Their strong hearing is also another important consideration in a coyote’s ability to hunt.

If weather conditions or external circumstances impede hearing or scent, coyotes can be at a severe disadvantage.

Do Coyotes Generally Hunt In The Same Area?

Coyotes are semi-nomadic, and they hunt in the same general area after establishing territory. The territory coyote’s claim is established based on nearby resources, including the animals they hunt.

Do Coyotes Hunt In Packs Or Alone?

The coyote is an opportunistic hunter whose hunting routine changes based on its prey. When it comes to small animals, coyotes hunt independently. Larger animals require teamwork from the whole pack.

Hunting in groups only works when coyotes live in packs. Since the coyote is independent by nature, not every coyote prefers group effort.

Do Coyotes Stalk Their Prey Over Long Distances?

Coyotes will stalk their prey over long distances if it remains in their territory. They are intelligent canines who know the value of an animal’s worth. The wild coyote will not track prey that is not worth it.

Do They Have A Method Of Luring Their Prey?

Coyotes are opportunistic hunters who typically do not bother with luring their prey. However, the trickster coyote has many strange ways of accidentally luring in its prey.

Many myths suggest that coyotes lure domestic dogs into the woods to attack them, but plenty of inconsistencies refute these theories.

There is no evidence to support this theory. Male coyotes act territorial toward every male canine who approaches their mate. A reaction to a male dog coming near his companion could be an alpha male coyote’s instincts taking over.

Myth 2: Male coyotes lure dogs to large packs. In many cases, owners claim their dog was led into the woods and hunted by a coyote.

Coyotes are opportunistic hunters. Leading their prey into the woods before hunting them is not consistent with their hunting behavior.

The reality is, many dogs follow coyotes into the woods by accident, thinking that they are friendly dogs. Letting your dog roam free is a major mistake, especially in heavily wooded areas where coyotes can easily hide and camouflage themselves.

Even well-trained dogs can endanger themselves easily by putting themselves in the wrong place at the wrong time. The largest thing people fail to realize is that coyote packs are waiting nearby.

Will Coyotes Collaborate With Other Animals When They Hunt?

Surprisingly, coyotes and badgers have been known to hunt together, especially during the summer months.

The unlikely duo benefits from the coyote’s speed and the badger’s focused attention on what’s going on more close to the ground. To many experts’ surprise, both badgers and coyotes have been found to be more successful in hunting and finding food, when working together.

The two animals rarely team up outside of the summer months, however. In wintertime, the badger does perfectly well without the coyote, because the animal is better adapted for getting into dens and burrows where it can prey on hibernating rodents.

Instead of competing for food, these two animals work together like pack members.

Coyotes function side-by-side with badgers scavenging, hunting, and even playing together is entertaining. They have similar temperaments and easily get along with the coyote.

What Time Of Day Do Coyotes Hunt? Is It Only At Night?

Coyotes begin hunting around dusk and are the most active at night when other semi-nocturnal animals emerge from their dens where they sleep during most of the day.

Daytime hunting occurs mainly during the spring and summer when animals are more active. If coyotes have an opportunity to hunt, they will not pass it up.

Do Coyotes Hunt In All Weather Conditions?

Ironically, some “bad” weather conditions are considered good for coyotes, like fog.

Coyotes are still active during snowy weather because finding prey during winter is difficult. During snowy and wintry weather, coyotes rely on berries and gourds. Resources are limited, and vulnerability increases for the coyote.

Limited resources do not mean that coyotes hunting is entirely limited. Like the coyote, some species thrive in trying circumstances. The coyote is an opportunistic hunter who is willing to strike when the moment is right.

Coyotes may retire to their den for a few days if the snow becomes too intense. Blizzards are perfect examples of when a coyote may stop hunting for a few days.

Similar to windy weather, coyotes’ hearing capabilities are limited when it is raining.

Coyotes can easily hide in fog which makes it a prime time for hunting. They are most active during foggy weather because fog is perfect for hiding as they hunt prey.

Fogginess even makes daytime darker, so coyotes can hunt small animals stealthily at all hours. Masking themselves from large predators using fog is another common benefit.

Windy weather decreases a coyote’s ability to hear, which can impede its hunting capabilities. Wind does not deter a coyote from hunting, but their blocked hearing can limit the type of prey that a coyote hunts.

For instance, a pack of coyotes may choose not to cooperatively hunt prey on windy days because it can be difficult to hear calls. Very high wind may lead coyotes to avoid hunting altogether if it is too high.

Will Coyotes Play With Their Prey, Or Take It Down Quickly?

Coyotes prefer to take down their prey quickly because this keeps their food secure. They aim for the throat when taking down their prey with the intent to take out the animal immediately.

Large predators like wolves and mountain lions can take prey away from coyotes if they are not careful.

How Do Coyotes Take Down Their Prey?

Coyotes stalk their prey before eventually taking it down by pouncing on it. They often bite their prey’s throats to take them down quickly and then take them to a safe place that they can eat. Coyotes may also group as a pack to take down larger prey.

Playing with food is a behavior that is more commonly seen in felines than canines. It is not common for coyotes to play with their food because they are self-conscious of the larger predators that may steal it. This self-consciousness drives their desire to consume their food promptly.

Do Coyotes Sometimes Hunt For Fun?

As far as coyotes are concerned, there is no such thing as hunting for fun. However, people still frequently blame them for killing farm animals and pets.

The purpose of a coyote’s evening hunts is solely for the intention of feeding themselves. They hunt when they find food readily available to them, not because they are trying to have a fun time.

Will Coyotes Eat The All Their Prey, Including Intestines, Bones, And All?

Coyotes will use their strong teeth and jaw to eat almost all their prey aside from the bone fragments. As a scavenger, coyotes pick apart carcasses often and may return to the same animal carcass for seconds later.

How Often Will A Coyote Successfully Take Down Prey? How Many Deer Do They Consume Per Year?

The opportunistic hunters only hunt prey they are capable of taking down. The fawn population is preyed on by coyotes because of their vulnerability. Predation-related mortality statistics vary, ranging anywhere from 10% to 50%.

Coyotes are influential in the deer population. The overall amount of deer that coyote eat each year varies based on the available resources.

Coyotes need to eat an average of 2 to 3 pounds of food each day, and with a deer weighing 125-300 pounds, a single coyote won’t be likely to eat from more than a few deer carcasses per year.