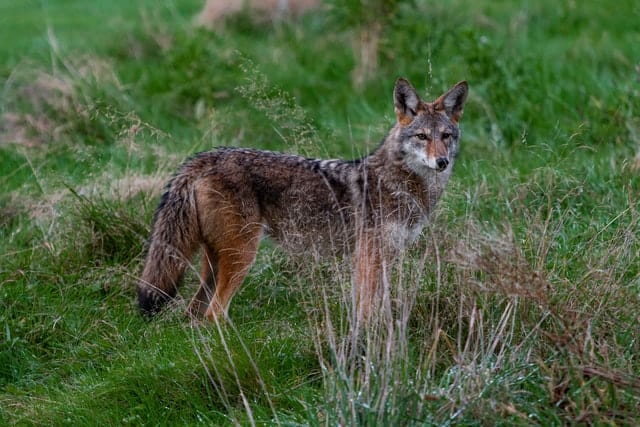 Coyotes are unique among the canine family. They only live in North America and are some of the most intelligent and cunning animals in existence. But, if you’re out and about in the great outdoors, it is possible to mistake them for other animals.

So, what other animals look like coyotes? There are only a select few but what you may think is a coyote could actually be a wolf, fox, or some domestic or wild dog. But, since coyotes are mostly nocturnal, you could be seeing a wild cat, jackal, or raccoon if you’re wandering around at nighttime.

All of this will greatly depend on what time of day it is, where you are, how much visibility you have, how good your vision is, and your skill at identifying animals.

If you ever get the privilege of seeing a coyote in daylight, their look is unmistakable. They have large brown or black eyes with a bushy tail and distinctly pointed ears. It’s also common for coyotes to carry their tails low to the ground.

They have a coloring that ranges between black, gray, white, red, brown, and taupe. Sometimes they have cream and white blended into their coat in varying degrees. They often have a tinge of red around their faces and ears along with black on their backs and tails.

They’re thin and lithe yet muscular. They have narrow, slender snouts and, although they appear like their dog or wolf relatives, they have a gait and temperament all their own. They’re about two feet high and four feet long, weighing between 20 and 55 pounds.

Differences between a Coyote and a Wolf

It’s easy to confuse a wolf with a coyote because they are direct cousins to one another and their coats have very similar colors. Both creatures run in packs too.

The biggest determiner between wolves and coyotes is weight. Wolves tend to pack on the pounds and look rounder because of their furrier coats. It’s not at all common to see a fat coyote in the wild.

Wolves Are Much Bigger

Wolves have broader heads and rounder, shorter ears. They tend to be twice the size of the average coyote; bigger-boned and fluffier. Wolves are also very tall and much larger than a coyote. Coyotes tend to have a slimmer, bonier appearance while wolves have more noticeable muscle mass.

Differences between a Coyote and a Fox

Foxes are much smaller and closer to the ground than a coyote. Oftentimes, people mistake foxes for baby or juvenile coyotes due to their size. Coyotes and foxes share similar pointy ear shapes and body shapes. But, coyotes have longer ears, limbs, and snouts than foxes. Fox features are more demure, delicate, and narrow.

However, gray foxes tend to have extremely similar coloring, so it’s easier to mistake them for coyotes based on that alone. This will be especially true if the sun is going down. But your biggest tell-all sign between a fox and coyote will be their relative height to the ground. Coyotes stand much taller.

The coyote’s face is more dog-like but foxes have bushier tails. There’s a scruffiness appearance to coyotes and are often seen with their pack. But foxes are solitary creatures and only get together with other foxes when it’s mating time.

In a way, foxes take on many of the same characteristics as that of a large house cat. They are the only canine species with vertical slits in the pupils and weigh between 10 and 15 pounds.

Baby coyotes look just like domestic puppy dogs from a distance. Sometimes they can also take on the characteristics of fox or wolf pups. A little closer view will reveal that a baby or juvenile coyote looks just like a Chihuahua. Their feet are diminutive with short snouts and tiny ears.

At four weeks old, their snout gets sharper along with their ears and tail. This gives them more of the characteristics of a young German Shepherd. If you see one frolicking around, the tail will point downwards and they are often at play with siblings.

When you think you see a coyote it’s entirely possible you’re actually looking at a wild or domesticated dog. Dogs often keep their tails wagging and raised high, whereas coyotes keep their tail down and don’t often move it around.

However, not all dogs are going to appear as coyotes. The only breeds that take on similar characteristics are those that have wolf-like features. For instance, a lot of people mistake German Shepherds for coyotes because of how close in color they are. But, you could also be looking at some other wolf-like canine such as:

What Other Animals Can You Mistake for Coyotes?

If the sun is starting to go down for the day and the snout sits is at the perfect angle, you could construe a jackal, possum, or wild cat as a coyote. At nighttime, the biggest determining factor is the glowing eyeshine. A whitish-yellow appearance often with some reddish-orange is more than likely a coyote.

But, there are other animals that have this colored shine appearance to the eyes. In this case, you will have to identify the shape to be sure.

Coyotes have circular pupils with medium-sized round eyes. They’re not as wide as dog’s eyes and not nearly as slanted as fox eyes. Other animals sharing this similar color shine (but not necessarily the same shape) are: