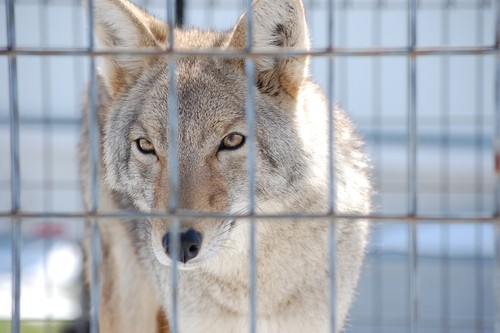 Coyotes can potentially be pets if you tame them well from the time they are puppies. If you want to take in a coyote as a pet, you must adopt them from a wildlife refuge. Adopting a coyote from the wild can be dangerous because of potential diseases, aggressive tendencies, and special dietary needs.

While coyotes can be pets (with a lot of dedication), they can also be difficult to raise because of things like their special dietary needs. They also have the same genetics as dogs, which means they can mate with domestic dog breeds. If you do not neuter or spade your dogs, you may risk breeding.

Keeping coyotes as pets is illegal in most states. The exception to this rule is if you own coyotes for zoological or scientific reasons. Owning a coyote for scientific or educational purposes is possible with an exotic wildlife license. It can be problematic if you are inexperienced. Exotic pet licenses ensure people are qualified to care for this wild canid, so no problems arise.

Can Wild Coyotes Be Tamed or Domesticated?

Wild coyotes can be domesticated if you tame them at a young age. Humans can alter many of the coyotes’ natural behaviors to accommodate the domestic lifestyle. Coyotes are very adaptive, which makes it easy for the coyotes to adjust to domestic habitats.

It can take several generations for coyotes to adapt to domestic habits, which is why you should never take a coyote from the wild and attempt to tame it yourself.

Is It Safe To Keep A Coyote As A Pet?

Coyotes can be potentially safe pets if you train them from a young age. They can be dangerous to keep as pets because of their potentially aggressive tendencies and dietary needs.

It is only safe to keep coyotes as pets if you have prior experience with wild canines. Experience guarantees that you are capable of maintaining the coyote’s primal tendencies.

Will A Domesticated Coyote Get Along With A Dog or Other Pets?

Coyotes can get along with domestic dogs, but you should monitor them closely if they live together. The coyote is territorial, which means they can become competitive with other canines. Luckily, they are also considered pack animals, so they will get along with dogs and form close bonds.

Coyotes share DNA with domestic dogs, so these species easily get along. Domestic dogs and coyotes can play, mate, and communicate.

What To Feed A Domesticated Coyote?

The wild coyote has opportunistic eating habits. That means they will eat nearly anything that you put in front of them. Coyotes eat food like fruit, fish, meat, insects, nuts, and many other things.

Pet owners can feed their pet coyote birdseed, vegetables, fruits, and dog food to their pet coyotes. You may also feed them meat, such as chicken, beef, or fish. These high-protein foods provide coyotes with the same vitamins and nutrients they would forage in the wild.

It’s important, however, that the coyote’s diet remains as varied as it would be in the wild, so never stick to just one kind of food item.

Are Coyotes Legal As Pets?

It is uncommon for people to own coyotes as pets outside of zoos and wildlife refuges. Coyotes require large, open spaces to roam and establish territory. Most people who own coyotes do not adopt them as pets. They acquire them for scientific purposes.

Where Is It Legal To Have A Pet Coyote?

States where it is legal to own coyotes include:

Where Is It Illegal To Have A Pet Coyote?

It is illegal to own coyotes in most states. Repercussions for owning coyotes can vary from small fines to felonies and incarceration. Before importing and trapping a coyote to have as a pet, explore the laws of your state and local jurisdiction to ensure you are not breaking any laws.

The main reason that many states outlaw domestic coyote ownership is that coyotes can be dangerous. There have been instances when coyotes have put domestic animals and humans in danger. Even domestic coyotes that have been bred for several generations have primal tendencies that can spark aggression.

State and local governments may allow the acquisition of exotic pets for scientific purposes. One of these states is Alaska, which bans any exotic wildlife unless you have a license for education or scientific ownership.

States where it is illegal to own coyotes as pets include:

Nearly every state has special conditions to these rules, allowing people to acquire coyotes despite their illegal status. In certain states such as Nebraska, people can apply for a permit to own banned animals. There is no guarantee that the wildlife department will grant the permit.

Can You Pet A Wild Coyote? Are Coyotes Nice To Humans?

Never pet a wild coyote. Wild coyotes are unpredictable and are potentially dangerous to humans. Coyotes do not generally approach humans because they are fearful of them.

If they begin approaching you, that means they are too comfortable. Stomp your feet or throw something in their direction (not at them) to change their ideas of the coyote.

Where To Find Coyotes For Sale or Adoption?

Exotic animal breeders are one of the most common places that adopt coyotes. Wildlife centers, zoos, and exotic animal rehabilitation facilities will sell coyotes to people who have licenses.

Never adopt a coyote from the wild and expect them to become easily domesticated. Adoptable coyotes have been bred in captivity for generations to meet domesticated standards. Wild coyotes are unpredictable.

Reasons Why You Shouldn’t Keep Coyotes As Pets

Several reasons should prevent you from keeping coyotes as pets. Coyotes are prone to aggression and can cause danger to other house pets.

Keeping coyotes as pets can be problematic because they do not get to establish territory. Establishing territory is extremely important for the coyote. If you own additional dogs, coyotes can become stressed if they must constantly compete for territory.

Their territory battles may eventually lead to aggressive behavior.

Aggression can be a major issue for coyotes. Being aggressive is a natural tendency for the coyote. It is dangerous to own a coyote because they can become aggressive to their humans and the other animals that you own. Coyotes do not always become aggressive. However, this natural behavior is more likely to emerge since they are wild canines.

It is common for coyotes and domestic dogs to interbreed because of their close genetics. Coyotes are attracted to dogs while in heat and vice versa. The two coyotes will mate together, which results in the coydog. Like the coyote, coydogs are considered illegal pets in some states.