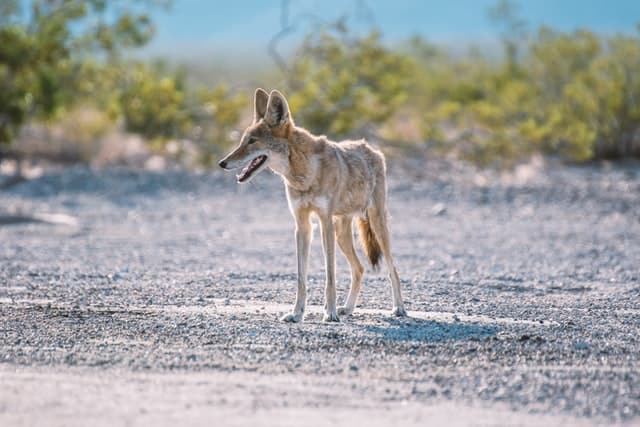 Many things influence how big coyotes are. Overall, the health of a coyote is the most important factor in coyote sizes.

Coyotes are medium-sized canines that vary in size based on gender and place in their social hierarchy. These scrawny dog-like animals can grow anywhere between 30-50 pounds.

Depending on their gender, coyotes significantly vary in size. Females are shorter in height and length, and they weigh less than males.

How Big Are Coyotes?

Coyotes are medium-sized canines that vary in size. These scrawny canines are build to run and can grow anywhere between 20-50 pounds. Many factors like gender and age can impact size.

The average coyote is roughly 48 inches long, including its 12-15 inch tail. They are on average 21-24 inches tall at shoulder height, depending on gender.

These measurements are around the same as a medium-sized domestic dog.

How Big Do Coyotes Get?

On average, a full-grown coyote is around three feet long and two feet tall, give or take.

Adult coyotes grow to roughly 30 pounds. Size can fluctuate based on their gender, with most males being larger and heavier than females.

There have been reports of 60, 80, and even 100 pound wild coyotes. Depending on a variety of factors, how big coyotes get can significantly vary.

How Much Do Coyotes Weigh?

Healthy newborn pups should weigh around 8 ounces to 10 ounces, around half a pound, and healthy adult coyotes between 20-50 pounds.

Weight varies based on gender, with females weighing less than males.

Position in the social hierarchy may also impact weight. A coyote’s large size can often help identify alpha males and alpha females. They get the most food, and therefore, they grow the largest. Isolated coyotes might be malnourished and will weigh significantly less.

Are Male and Female Coyotes the Same Size?

There are a few notable differences between male and female coyotes.

A vital distinction between female and male coyotes is their frame. Females coyotes are shorter than males at around 21-22 inches tall, two or three inches shorter than a male coyote.

Females often weigh less than male coyotes by 10-15 pounds, but this is not always true. Alpha females are often larger than beta males because they eat better. So, seeing large alphas and large betas are indicators of a healthy pack.

How Big Are Coyote Pups And Juvenile Coyotes?

Coyote pups are less than one pound when born. There is not much difference in a coyote’s scrawny frame as these canines slowly mature, but they get taller and heavier.

A breakdown of juvenile pup size is as follows:

How Big Are Coyotes Compared to Other Animals?

Coyotes are medium-sized predators, which means that they pose a threat to many animals, but they also have many threats of their own.

The coyotes’ petite size makes them a major target to large predators like mountain lions, wolves, and bears. When it comes to these large predators, coyotes are anti-conflict. By avoiding conflict with their predators, they maintain the numbers in their packs.

In contrast, coyotes are the predators of small animals like rabbits, mice, and small livestock. The threat they pose to livestock makes them a major pest to farmers. Luckily, there are plenty of humane methods to keep them away from your property if you have a coyote problem.

How Big Are Coyotes Compared To Wolves?

Coyotes are significantly smaller than wolves. The average wolf found in the United States weighs anywhere between 50-110 pounds with a shoulder height of 26 to 32 inches.

A wolf’s paw will get up to 5-inches long, including its nails. A coyote, on the other hand, has a paw that will only get 3 inches long. This substantial difference in paw size is visible proof of how much larger wolves are than coyotes.

Wolves are noticeably larger than coyotes, including height and weight. The size difference between coyotes and wolves includes when the two canines are pups. A juvenile coyote is smaller than a juvenile wolf. Furthermore, the wolf will develop and grow more quickly.

How Big Are Coyotes Compared To Dogs?

Coyotes are the same size as medium-size domesticated dogs. Medium dogs are considered any dog that weighs between 20-60 pounds which is the same weight range as coyotes.

Depending on the coyote’s gender, the overlap of breeds of the same size can range anywhere from a Corgi to a Border Collie.

The following, domesticated dog breeds are the same size as coyotes:

Every coyote differs in size. Familiarize yourself with coyote identifiers to help you recognize coyotes.

How Big Are Coyotes Compared To Foxes?

Coyotes are much bigger than foxes, and they show this in many ways, like height, weight, and length. Coyotes weigh double or triple the weight of foxes, and they are taller, too.

Upon a visual glance, there are many differences between coyotes and foxes, like their height. Coyotes are taller and have longer limbs than foxes. The limbs of a coyote are easily visible because of how high they carry themselves from the ground.

The overall size difference between coyotes and foxes is also a key visual indicator between the two. Coyotes are much larger than foxes. Foxes weigh around 10-15 pounds, and coyotes weigh double or triple this amount at 20 or 50 pounds.